Trump's Obvious Election Win Was Hiding In Plain Sight; Will It Be So In 2020?


The key factor, hiding in plain sight, that pointed to a victory in the election for Donald Trump was obvious but a misled, often deluded and hate filled media's blinkers made it invisible.

The media and pundits like the Princeton Consortium's Sam Wang, FiveThirtyEight's Nate Silver and worst of all the HuffPost Pollster Natalie Jackson who predicted a Clinton win varying from 80% to 98% were misled by flawed polling in key battleground states.

With hindsight it is clear the polling models did not account for voters, especially in the Midwest, who had not voted for either McCain or Romney coming out strongly for Trump in rural areas.

That, allied to a drop in support for Clinton by non-whites/Hispanics, was more than enough to give Trump a substantial electoral College margin.

The polls were well within in the margin of error as regards the popular vote, which is of course irrelevant, but the fact of her  "victory" was tempered by her running up huge margins in the Democrats coastal redoubts plus Illinois. This more or less correct polling would have led the prognosticators further off the correct path of poll analysis.

Apart from a few, mostly partisan Republican bloggers who saw a Trump victory (including, publicly, yours truly I have to say) the most prominent person who was correct was an academic who based his analysis on a set of historic parameters.
Alan Lichtman, History professor at American University developed;

"A system for predicting the popular-vote result of American presidential elections, based upon the theory of pragmatic voting. America’s electorate, according to this theory, chooses a president, not according to events of the campaign, but according to how well the party in control of the White House has governed the country.

If the voters are content with the party in power, it gains four more years in the White House; if not, the challenging party prevails. Thus, the choice of a president does not turn on debates, advertising, speeches, endorsements, rallies, platforms, promises, or campaign tactics. Rather, presidential elections are primarily referenda on the performance of the party holding the White House."

Lichtman uses a series of 13 “keys,” which are true/false statements that he says can help predict whether the incumbent party will remain in the White House.

For each of these statements, a “true” statement favors the incumbent party, but enough “false” statements portend their defeat in a presidential election. This model, he told the Washington Post in September, predicted that Trump would win"

However, Prof.Lichtman, the media the psephologists and their pundit acolytes could all have
spared the time and effort and misleading, for the most part, coverage by consulting one election predictor that has been correct since 1984 (now nine elections in a row.) 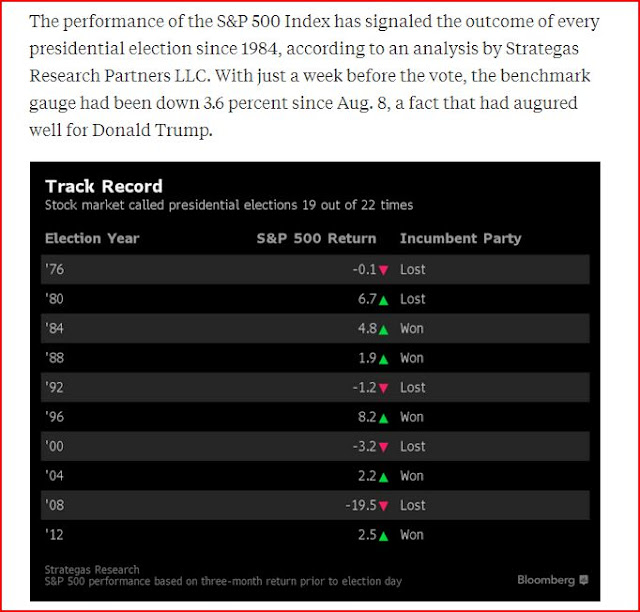 Certainly Prof.Lichtman's "keys" included two major economic parameters  but neither were as specific as the S&P guideline:

What we can make from this, as long as this predictive model holds until it too fails of course as politics is always in a state of  flux in the long term, is that Bill Clinton's dictum "it's the economy stupid" is still correct and campaigns, get out the vote scrambles, scandals etc are all subservient to that principle.

Currently the economy current is seeing substantial GDP growth, currently running at an annual rate of 3% with second quarter growth the highest in two years, unemployment down, average wages rising at the strongest pace since 2009, and the share market, as of this writing, at record highs,

If this continues and history is still a guide all the "Trump Russia" and other "scandals" alarms and diversions MSM punditry and especially poor polling, will meet the same fate in the 2018 mid-terms and Trump's reelection in 2020 as they did in the 2016 election.
Posted by M. Joseph Sheppard at 11:38:00 AM