The message is concise, clear and exact. Thoughtful, fighting and challenging conservative sites are few and far between in a media world that is massively dominated by the bi-coastal media on television and the major website, Twitter and blog avenues.

I would wish to believe, and hopefully the 1.1 million views of my blog 'A Point Of View' and my substantial Twitter following confirms, that my contribution to fighting the good fight for conservatism is worthy of similar support.

While my blog contains essays and observations of apparent interest and value, the format is antiquated and not geared to bring the conservative message to a mass audience at this crucial run-up to the most important election for conservative values in our lifetimes.

With your assistance I can move to an updated website and create a podcast site which will further broadcast the message of support for President Trump and expose the hypocrisy and bias of the leftist media.

If this is something you would see of value, or simply for encouragement, then;

USE THE DONATE BUTTON ON THE RIGHT HAND SIDE OF THIS PAGE TO HELP MAKE THIS A MAJOR SITE THAT WILL PROMOTE YOUR VIEWS AND FIGHT FOR YOU TO DEFEND THE VALUES YOU CHERISH BEFORE IT IS TOO LATE AND LEFTIST CHANGE BECOMES IRREVERSIBLE.

Thank you for your support.
MJS
Posted by M. Joseph Sheppard at 4:20:00 AM No comments:

The lesson of the 2016 polling "miss" is clear by the consensus of the polling firms. There was a substantial number of land-line rural voters who were either unreachable or who wouldn't participate in polling surveys. Pollsters either ignored that cohort or did a "best guess." This led to an overestimation of Hillary Clinton's support and an underestimation of Trump's.

The classic example was in Michigan where, right up to the middle of the election night, the Detroit Free Press pollster said Hillary would win Michigan based on their fieldwork during the night which reported the urban areas with a significant Clinton win (including a suburban formerly Republican county) but they did not canvass the rural areas whose Trump swing was enough to give him a narrow victory in the state.


Presumably the same polling outfits have taken this on board, but even if they have, the "unreachables" and "won't answerers" still leave the firms with a best guess weighting problem. Compounding this conundrum are the "Shy Trump voters" who, because of social pressures, won't say they will vote for Trump or outright lie to the polling firms.

But are shy Trump voters a reality or a myth? There is conclusive data which show they not only exist but do so in large and increasing numbers.

This must be a factor in the seemingly impossible large head to head Biden Trump polling which shows Biden up an aggregate of near 9% and which renders a true picture impossible to obtain at present and has the pollsters on a collision course with two massive failures in a row.

Here  is the data from Rasmussen for the 2016 election and the 2018 midterms and from Trafalgar and The Democracy Institute for 2020. The conclusions are obvious.

Why Do You Think Your Blend of IVR Interactive Voice Response Polling ("Robo-Calling") and Internet Panels Is Superior to Live Operator Surveying?

Rasmussen Reports' blend of IVR and internet panel polling enhances survey respondent privacy, which we believe increases survey accuracy.
Rasmussen Reports did a survey in late August of 2016 in which we asked Likely Voters: Compared to previous presidential campaigns, are you more likely or less likely this year to let others know how you intend to vote? Or do you feel about the same? Seventeen percent (17%) of Republicans – nearly one-in-five – said they were less likely in 2016 to tell someone how they intended to vote. That compared to just 10% of Democrats. If you’re looking for why Mr. Trump was the upset winner contrary to the predictions of other pollsters and pundits, this 7% difference is a good place to start.

The Indie shift rather than any Blue Wave" is indicated here by the sharp drop in those indies who were "less likely" to let others know how they were going to vote.

Podcast 26:15 in; (cut and paste)
https://www.theamericanconservative.com/state-of-the-union/podcast-inside-the-mind-of-the-shy-trump-voter-with-robert-cahaly/
Cahaly at Trafalgar; "The silent, shy, Trump voter factor is significantly higher now than it was in 2016". I'D POINT TO THE PREPOSTEROUS EPIC/MRA MICHIGAN POLL 5/6/20 "BIDEN +16" AS A CLASSIC EXAMPLE, AT THE HEIGHT OF THE BLM/COVID/MSM ATTACKS, AS THE EPITOME OF THE "SOCIAL DESIRABILITY FACTOR" DRIVING THE NON-RESPONSES OR FALSE RESPONSES OF THE SHY TRUMP VOTER

Only 4% of DJT voters are open to changing their mind -- while 12% of Biden's backers are. At the same time, just 29% of DJT voters would admit their support for him in public, while 82% of Biden supporters would proclaim their vote openly."

As of this writing the New York State Special Congressional Election for NY27 on June 23rd has not been decided because "The NY Board of Elections may be overwhelmed with counting so many postal votes" due to the Corona virus pandemic causing so many to have voted by mail. Final tally is expected about a month after the actual election day


Final results will not be available for "a good couple of weeks," Sandonato said.

Not only has that election not been decided but some important Democratic primary elections where insurgent AOC type candidates are leading in the tabulated votes but also the Democratic presidential primary is also outstanding.

The latter is of import because Bernie Sanders has over 142k votes so far and Biden is below 68%. If those numbers hold on a relative basis it would be a major blow to Biden, as it would show a substantial lack of enthusiasm for him in the Democratic heartland, and raises the question as to what those Sanders supporters will do in November.

This is just one state, the chaos and confusion across all 53 Electoral College voting areas (50 states plus D.C. and the Maine/Nebraska CD's) is unimaginable and it sets up for a Constitutional crisis the republic has never seen since the Hayes/Tilden election of 1876 where Hayes was confirmed in March 1877

With America being so polarized now, and if there is no clear winner this November, the scene is set for mass civil unrest as long delays in counting postal ballots and subsequent legal challenges could prevent any attempt to show an Electoral College victor by March 2021 when a president should have been elected according to the Constitution.


Then what? The Twelfth Amendment to the Constitution sets out the following;

This presumes the incoming new Senate has chosen, or in fact has the moral right to choose, a Vice-President when no clear winner has been so designated. At that point there is no Constitutional guidance with, perhaps, the Speaker of The House becoming acting president. If that person is from the party that finished second in the counting on election night in November it would be another recipe for chaos and mass protest.

What is the definition of "The Vice-President shall act as President under these circumstances? Would that person be obliged to surrender the office once a valid and final count had been determined-there being no obligation to do so.

The 20th Amendment appears to cover this situation;

But that presumes a Vice-president has been elected when that would not be the case. If one has not then for an incoming Congress possibly dominated by the "losing candidate" to designate a president when one is ahead in the counting from the oppostion party is problematical to say the least

This requires the approval of both Houses of Congress which under the circumstances would be challenging to say the least. However if that eventuated there would be nothing to stop the president resigning in favor of their chosen VP who would presumably be their party's presidential candidate from November.

This has moved from a political "what if parlor" game to the realm of, sad to say, a strong and disastrous reality. There is much to be said for the election to be delayed by whatever Constitutional method available, until a vaccine for Covid has been found. The alternative of chaos. rioting, property destruction, bitter enmity is unthinkable.

Wise heads need to prevail now, not later when it may be too late

the GOP base turned out and provided remarkable victories.

Yes, there were losses; surprisingly a Kentucky State Senate seat and two Massachusetts state seats (the latter marks the extinction of the GOP in that state but as expected except for the Governorship as even libs like a lid on spending) 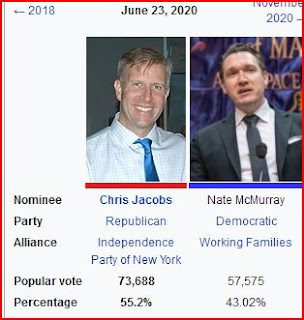 "“Tonight was a win for President Trump and Tom Tiffany that demonstrates the enthusiasm behind our president across Wisconsin,” said Trump campaign spokeswoman Anna Kelly."

"Following the 2019 'Blue Wave' in Virginia legislature elections, however, residents of Staunton, which is supported in large part by private liberal arts college Mary Baldwin, came out in droves to support Republicans this week. Three Democratic council members lost to their Republican challengers in an unprecedented sweep by the GOP with a voter turn out that smashed previous election cycles.
More than 17,000 votes were cast in the in the election in which all four council members were vying to protect their seats. The last Staunton election for all four members was in 2016 in which fewer than 7,000 votes were cast. One Virginia political analyst, Chris Graham, of the Augusta Free Press described the results as "stunning almost beyond words."
Posted by M. Joseph Sheppard at 8:34:00 PM No comments: