Who Will be Mike Bloomberg's Vice-Presidential Running Mate? With Poll

With the possibility of Donald Trump being the GOP's presidential nominee becoming more of a reality, and thus Mike Bloomberg entering the race as an Independent (the drums have been beating for this for ages for anyone with ears to hear), the question arises "who might be Bloomberg's running mate?"

That's a tough question. For Trump there is a cast of possibilities which have been well canvassed as for gender, regional balance, age, experience etc. The candidates who ran against Trump and lost would, unless they are utterly devoid of honor and can be bought, not be available for Bloomberg as they signed the pledge to support the nominee.

It is hardy beyond the bounds of possibility that the disaffected Establishment may give a nod and a wink to Mitt Romney to pair up with Bloomberg though.

Whether such a pairing from Hell would hurt Trump, or make his supporters even more determined to vote is moot, but I would be confident such a brazen attempt to steal the election from Trump would be a disaster for the Establishment and destroy the GOP.

"Republican" Bill Kristol joins with Leon Wolf to support Bloomberg if Trump is the GOP nominee. These people are worse than scum


Best for GOP, if Trump's nominee,"would be for Bloomberg & a conservative candidate to run." @LeonHWolf has it right http://www.redstate.com/leon_h_wolf/2016/02/27/trump-wins-nomination-gop-better-hope-third-party-run/ …

There is not so much speculation about Hillary and especially Bernie's running mates (except for this light-hearted poll) as, as with much about the Democratic contenders there just doesn't seem to be that much interest.

However a Bloomberg run is of much interest as he will certainly draw votes from someone. The initial analysis is that he would likely draw more from the Democratic candidate than Trump.

This opens the possibility of nobody having the required 270 Electoral College votes and the House deciding the presidency, and also for Trump to win New York State which would, almost certainly, give him the presidency.

So there is a lot at stake. A fascinating concept, and there is even "Chaos Theory A Sanders Bloomberg Trump Three Independent Party's" to add to the mix in this unprecedented campaign.

Which direction would Bloomberg go for a running mate? A Republican like John Huntsman or Former Governor Sununu to show he is not entering the race to bring down Hillary?

Or a Democrat like, the disaffected former Governor of Virginia Jim Webb who has toyed with a third party run himself. I have put the few options I can think of in the poll below but have left an open option for voters to pick who they think might be Bloomberg's choice.


"Ted Cruz at CPAC: I Would Not Be in Senate Without Sarah Palin"BREITBART

From Senator' Cruz's own mouth, he would not be a senator were it not for Palin's endorsement at a crucial point in his campaign, and of course he would not now be a presidential candidate without her impetus.
From Cruz's interview with Kevin Scholla as reported by US4Palin

"Even though Rick Perry's candidate is likely to defeat Sarah Palin's, her endorsement polls much more positively. 36% of voters say they're more inclined to back a Palin supported candidate to 21% who consider it a negative.

Subsequent to Sarah Palin's endorsement of him, GOP candidate for senator from Texas Ted Cruz has completed the astonishing journey from polling at only 3% to being in the final run-off. Cruz having kept the previously presumed winner Dewhurst below 50% in tonight's primary battle.
PRIMARY RESULT MAY 29th

It is clear beyond any doubt that Cruz owed his election to Palin's endorsement as do so many others e.g. Haley/Sasse/Fischer et al. Further Palin's endorsement at an absolute crucial time in Donald Trump's campaign very likely made the difference between his second place in Iowa and possible oblivion behind Cruz and Rubio there see "Palin's Endorsement  Saved Trump's Campaign For New Hampshire."

If Cruz gets less than 50%+1 of the vote in Texas on Super Tuesday then the delegates are apportioned and with Trump running from-15 to a draw in current polling that result seems likely. So at best Cruz would come out of Texas with a small delegate lead from the state whilst Trump is on the path to garner huge delegate wins across all the other states on the day.

If however Trump can get to 50% with Palin's active participation in Texas he would likely knock Cruz out of the campaign. Palin is currently tied up with her husband Todd's Iron Dog race in Alaska which means much to them both but if the call came I would be confident she would respond such is her nature.

It may be that the Trump team see a Cruz still active but rendered ineffectual an asset to keep alive in the campaign to split the vote with Rubio until Florida where Rubio looks like losing to Trump. But such matters are for the campaign to decide.

What is certain is that if Palin were called upon and made the difference between Cruz finishing first or second it would be beyond ironic and would be a testament to her enormous power. She endorsed Cruz and made him a senator, she endorsed Trump (Cruz; “Sarah Palin picks winners,") and could help make him a president whilst keeping Cruz in the senate.


Trump leads Rubio Even Head To Head in Florida

PPP's newest Florida Republican poll (conducted Wednesday and Thursday before the debate) finds Donald Trump dominant in the state. He's getting 45% to 25% for Marco Rubio, 10% for Ted Cruz, 8% for John Kasich, and 5% for Ben Carson.
The most remarkable thing in this poll though is what happens when you narrow the field down to just Trump and Rubio- Trump still leads by double digits at 52/38. Rubio does win over supporters of Cruz (56/25), Kasich (47/32), and Carson (64/21) in such a scenario. But Trump has such a big lead to begin with and picks up enough of the supporters of the also rans that it gives him the overall 14 point advantage.

Marco Rubio is getting clobbered by Donald Trump in home state of Florida, where a Quinnipiac University poll shows the frontrunner is polling at an all-time high in the Republican race for president.
Trump's 44-28 percent lead over Rubio reflects the momentum of the New York billionaire’s string of first-place finishes in the last three early state races, and it blunts the Florida senator's argument that he's the only candidate who can defeat the frontrunner in a one-on-one race.
Also, the results give more ammunition to Texas Sen. Ted Cruz and Ohio Gov. John Kasich — running a distant third and fourth in the Florida survey — to say that Rubio should leave the race because they're doing better in polls of their home states than Rubio is in his. 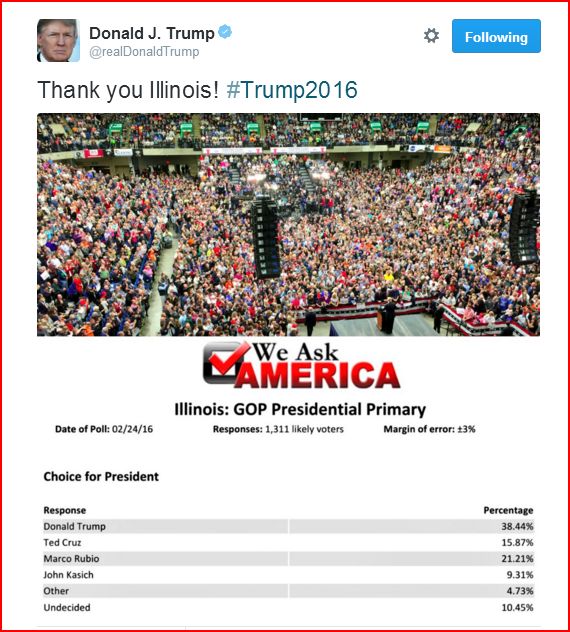 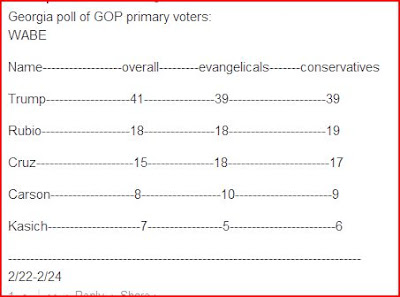 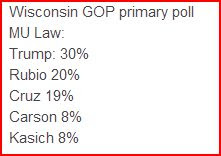 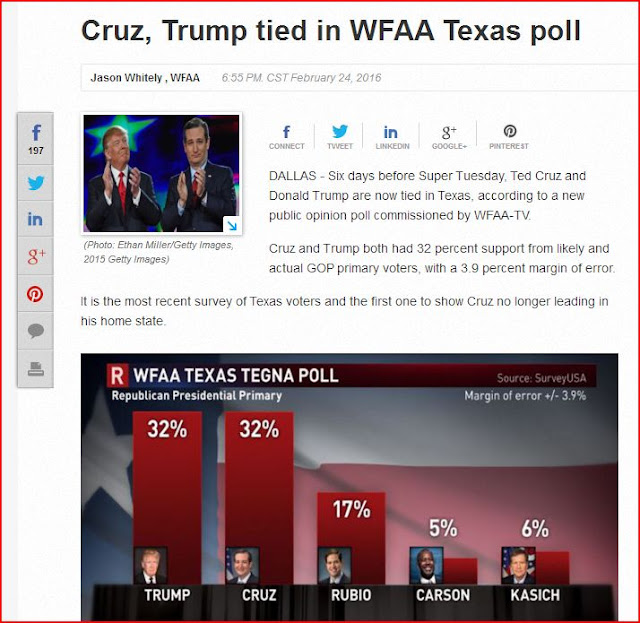 
Marco Rubio is a distant third in the WFAA Texas TEGNA poll with 17 percent, John Kasich has 6 percent, Ben Carson has 5 percent and another 5 percent of respondents remain undecided, the poll revealed.

Landslide in New Jersey Trump by 27

With the so-called “SEC primary” quickly approaching, Donald Trump has a 17-point lead over his closest rival in Alabama, according to a new poll.Read more: http://dailycaller.com/2016/02/24/sec-primary-donald-trump-has-a-17-point-lead-in-new-alabama-poll/#ixzz418RAhHTQ

97%
at 12 percent, former neurosurgeon Ben Carson at 8 percent and Ohio Gov. John Kasich at 7 percent. Seventeen percent of those polled are still undecided.


On Tuesday, a slew of states will go to the polls, including in Alabama, Arkansas, Georgia, Tennessee, Texas, Oklahoma and Virginia. Trump is leading in many of these states; the day is also especially important to candidates like Cruz, whose strategy has long included winning a lot of delegates in the South.
“Trump’s popularity in Alabama continues the trend we see elsewhere,” said Joe Sanders, the president of Master Image. “Trump’s numbers in Alabama appear to be a few points lower than other southern states, but in line with what should happen on March 1, considering almost one in five voters remain undecided.”


A separate poll of 500 likely Republican voters has Donald Trump solidly in first place with 31.7 percent support. The real estate mogul won every age bracket surveyed, as well as both sexes and voters inside and outside metro Atlanta.
Just as interesting is the race for second place. The poll has Marco Rubio four points ahead of his Senate colleague Ted Cruz for the runner-up position, 22.7 percent to 18.7 percent, showing more cracks in what was billed as Cruz’ southern firewall.
Rubio polled best among Republicans older than 40, coming within three points of Trump in the critical 40-64 age bracket.


Nearly 11 percent of Republicans surveyed on Sunday were undecided in the GOP race, with a margin of error of 4.4 percentage points . The results can be found here. 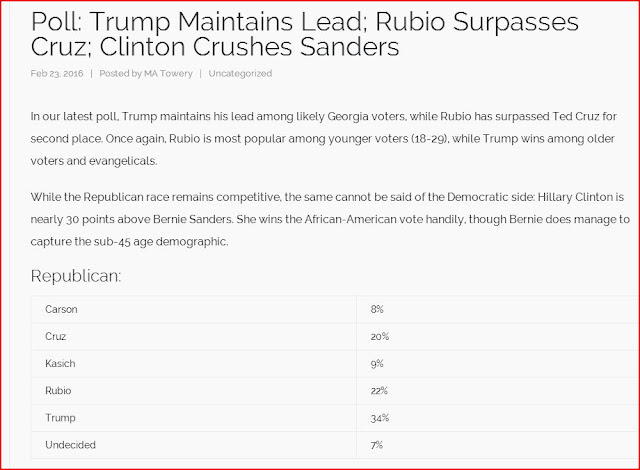 Trump at all time high in new Reuters poll 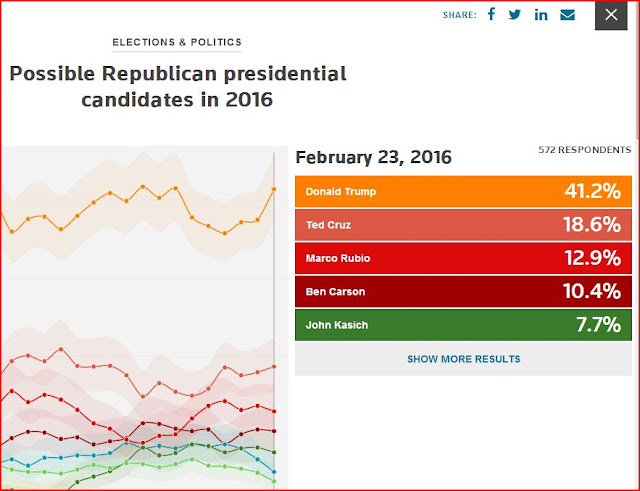 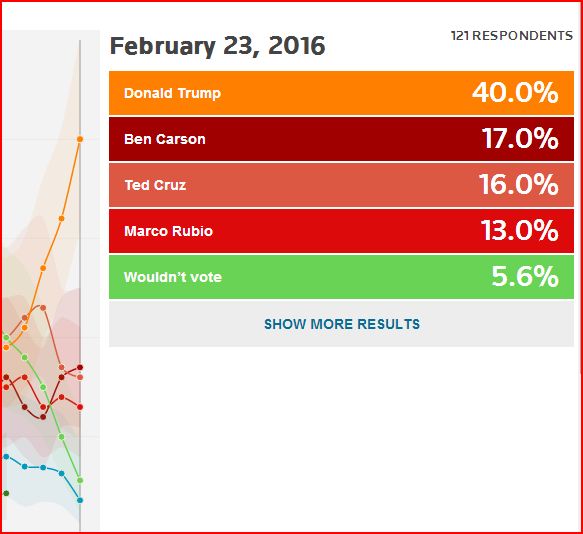 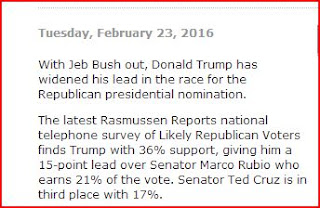 And confirmed by Reuters 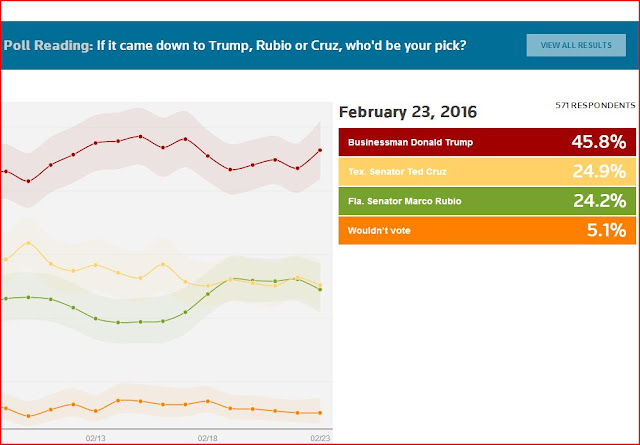 CHARLESTON, W.Va. – A MetroNews West Virginia Poll shows Republican Donald Trump and Democrat Bernie Sanders with significant leads among likely presidential primary voters in the state.
The survey by REPASS Research has Trump with 40 percent compared with 20 percent for his nearest rival, Texas Senator Ted Cruz. On the Democrat side, Sanders leads Hillary Clinton by nearly two-to-one, 57 percent to 29 percent.
You can read the complete poll here.
The survey was conducted between February 11-16, before the South Carolina Republican primary and the Nevada Democratic caucus.  Trump won the South Carolina primary while Clinton was victorious in then Nevada caucus.
Rex Repass, CEO of REPASS Research and director of the MetroNews West Virginia Poll, said Trump’s strength in the Mountain State is highest among voters 35-44 years old, independents, and those in middle-income categories.
“The economy and frustration with the status quo in Washington is helping these non-traditional candidates nationally and in West Virginia,” Repass said.
Sanders’ biggest strength is with young people. However, he has majority support in all age categories except seniors.  Among voters 65 and older, Sanders’ lead is 43 percent to 36 percent.
On the GOP side, after Cruz, Florida Senator Marco Rubio is at 15 percent, Ben Carson at ten percent, Ohio Governor John Kasich at six percent and former Florida Governor Jeb Bush at four percent.  Bush withdrew from the race Saturday night after a disappointing fourth place finish in South Carolina.
West Virginia’s primary is May 10.
The MetroNews West Virginia Poll is a result of interviews with 411 registered likely voters in the state using landline phone, cell phone and opt-in internet panels. It has a margin of error of +/- 4.9 percent. The non-partisan West Virginia Poll has been conducted periodically since 1980. MetroNews is the media sponsor. 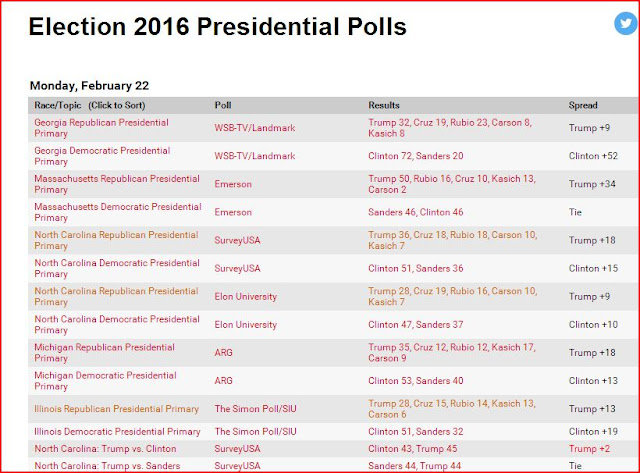