Quote from National Review (Via TPM)

The 1200   page "Gang of Eight's" and 14 Republican Senators who voted for it immigration bill is, should it pass the House, not only the words longest suicide note in length of words but also in time.

Unless a final bill includes a totally secure border not only will the millions of illegals be voting for the Dem's in 70% ratio in 13 years when all the paths to citizenship have been cleared but they will be joined by who knows how many more who will slip through the unsealed border over that period.

It would be a fool who would bet against a future Democrat president/congress changing the terms of whatever bill goes through to shorten the period of the path to citizenship and the terms required for it.

How the GOP establishment sees any rewards from the current Hispanic population who vote for the Dem's because they acquiesced in a path to citizenship for illegals bill is a mystery. Why would Hispanics 71 % of whom voted for Obama voted for any Republican in a higher ratio. Even if they did it has been shown that the GOP would have need 70% of Hispanic voting support for Romney to have just squeaked by which is of course not going to happen.

If/when millions of  Hispanics who are currently illegals become enfranchised this is what the 2027 Electoral College result could look like. One or more states less would make no difference to the landslide for the Dem's and the utter impossibility of the GOP having a Republican president for generations. 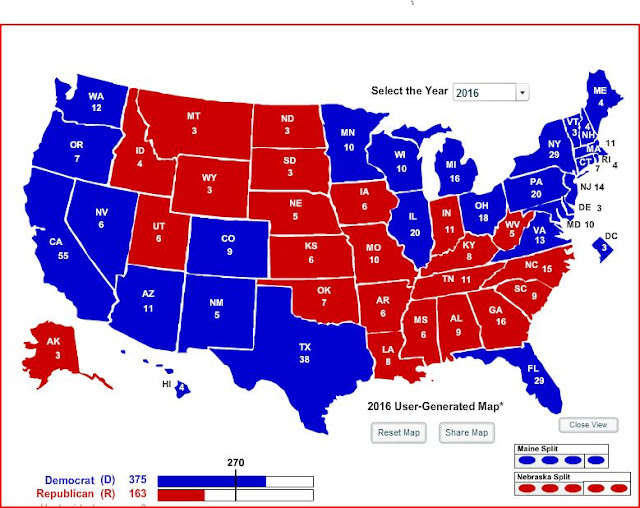 Such a one sided Electoral College result and generation control of the White House is historically the norm.
From 1860 to 1908 the Republicans won eleven presidential election to the Dem's two, and from 1932 to 1948 the Dem's won five straight. With a massive coalition of Hispanics/Black and the White component of the Northern states there would be nothing to stop the Dem's from holding the presidency until some unforeseen event, like a war or 1929 style depression, caused a massive reaction.

Only the GOP House holding firm on the immigration bill in any form, even with a secure border provision, can prevent the party from being rendered utterly without power in the economic and social spheres for generations. The USA would be  a "progressive" country in the social sphere, and who knows how much state control and higher taxation would ensue as well.

The only hope for the Republicans, or rather for the conservative movement, is to stand on total principle. Any immigration bill that legalized illegals is a moral failing. Rewarding law breakers is anathema to conservative morality. Even worse, rewarding law breakers, hurting people who try to immigrate honestly and committing electoral suicide in the process is utter madness.

If the GOP is going to lose  the presidency then why should they not at least go down fighting on and for principles? Let 2016 see a true conservative team running on conservative economic principles, committed to traditional conservative morality in the right to life sphere, and against legalizing and empowering illegals.

Let a Palin or a Cruz or a West or any of them in a team run on that platform and at the very least a stand will have been made, instead of the current pusillanimous attempt to gain votes from a mass of people who will never vote for the GOP in a winning ratio.

Who knows, perhaps the millions of Whites who stayed home in 2012 will vote for such a ticket, and will respond to the call for honor above expediency?  Any other campaign is one of dishonor and could lead to the breakup of the GOP.  This could be the Electoral College result of a campaign of ideas and ideals  and perhaps the last chance  for traditional American values. 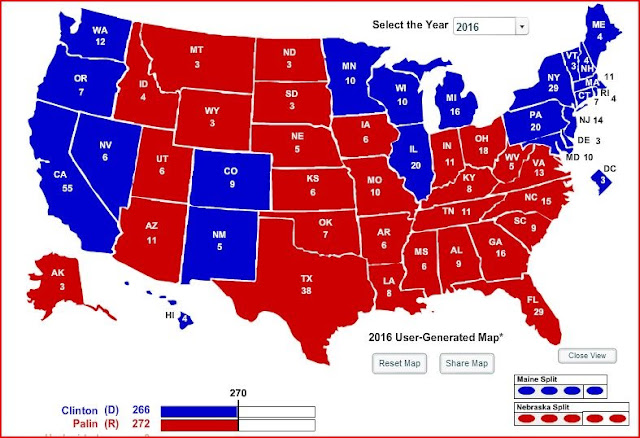