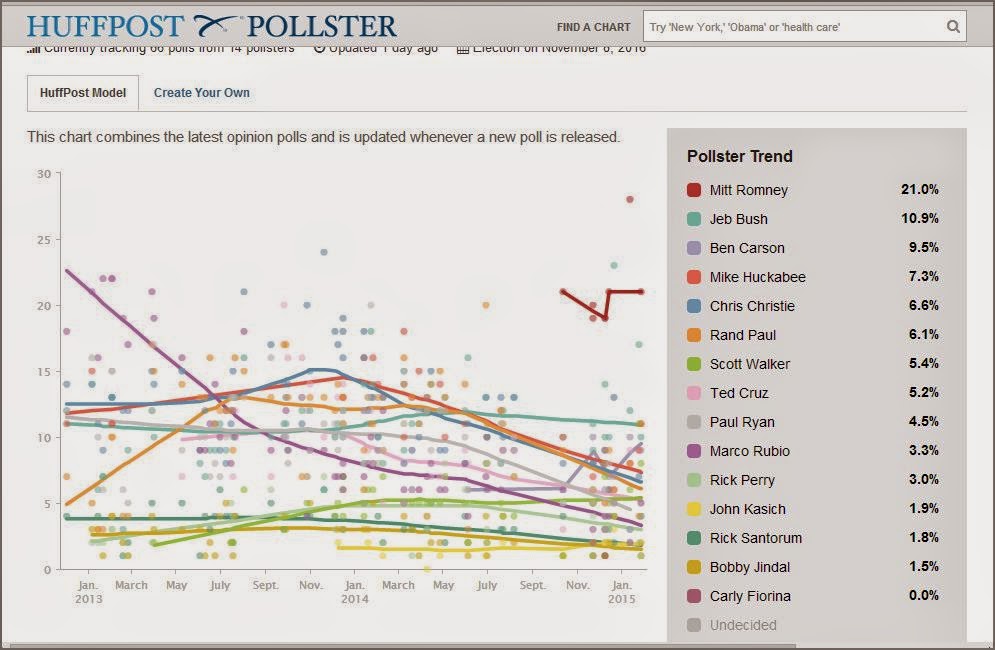 The poll of polls chart above shows, or rather, reinforces Governor Palin's dictum "polls are for strippers." Palin is undoubtedly correct as far as individual polls are concerned, but Nate Silver at 'FiveThirtyEight' has proven, thus far at least, that an amalgam of polls can indeed have value.

When all available polls for a state in a presidential race, or for an individual in e.g. a congressional race are averaged-over time-it has been shown, at least for the last two presidential elections, that a near perfect result can be garnered. Certainly Silver got the 2012 presidential race 100% correct in his state by state predictions based on that method of analysis. Certainly pollsters, like the at times hapless PPP Polling, get individual races terribly wrong-their 2014 mid-terms had some howlers, so, again Palin's point seem well proven.

What is particular fascinating with this poll of polls is that all the candidates before Romney bobble about within a narrow frame of slight ups and downs (mostly downs). Carson gets a jump up then goes down, Walker is now on the rise-but for how long? Clearly no one has traction and the one, Romney, who got the biggest jump of all (then went down and up) decided not to run! Obviously it is still very much anyone's game-seventeen at least, including some who are not in these polls.

As the punditry turns their, at times, fevered attention to the 2016 presidential election the individual state polls will surface-as will of course their very fevered punditry e.g. "so and so is leading the pack in such and such place and looks to be the clear leader" and other such nonsense. Iowa and New Hampshire are suffering, along with the rest of us, with such fevered imaginings already as the first polls appear.

Fortunately the pollsters at Huffington Post have a "Poll of Polls" aggregation for each of the candidates they currently detail as potentially running for the presidency. I have looked at the relative strengths, not of any individual amongst these potential nominees but, rather, the comparative strength of the Conservative/Establishment/Centrist groups. This method, which I appreciate is immediately open to criticism that I have wrongly, in someones view, put one candidate or other in the wrong category.

Certainly there is a degree of subjectivity, and I am of course happy to be so criticized, but I am confident that the main bulk of placings are not only correct but obvious to most. Further, I am also confident that the movement of a candidate considered to belong in another category than where placed will not, markedly, change the overall balance of percentages and that the overall premise is valid.

What I hope to achieve with this analysis is a better picture of who might end up being the nominee based on weight of factional support. This might come from one person in the major grouping (nearer to the nomination process) absorbing the support of others in that group who drop out, whilst picking up support from similar drop outs in a closely associated group.

Of course leaders can drop out as well via e.g. gaffes and scandals amongst a myriad of possible handicaps, but all that means is the next best placed will be in the position of absorbing support etc. At this point in time Romney and Bush serve as a perfect illustration.

If, from the Huffington Post aggregate poll, we place in the "GOP Establishment" camp Messrs. Romney, Bush, Ryan, Rubio, Christie, Kasich and Ms. Fiorina their total poll numbers add up to 48.2%

If we place in the "Conservative" camp Carson, Huckabee,Cruz, Santorum, Jindal they equal 25.3%

And in the "Centrist" camp Perry,Walker and Paul their aggregate is 14.5%.

At first sight (and I am confident the various "camps" are properly filled as I suggested might be the case) the Establishment camp is clearly in a very strong position at this point in time. Whether having a nominee from this camp, once again, will bring the best result result is another matter of course.

Of course "at first sight" is fraught with its own challenges, and there are a number of matters for consideration, explanation, and expansion, to whit:

The rise of Mitt Romney after the August poll from nowhere to 21%-where did his support come from?
Clearly many of the 33.8% "undecided" chose to decide strongly, surely, in his favor. What percent of them were influenced by name recognition, or genuinely were longing for Romney is unknown. The number of "unknowns" dropped to 12% in the first poll which had Romney included, so there is clear evidence that is where a substantial portion of his support came from.

Another confirmation of the  "Establishment" grouping containing the right people is the 8.8 point drop in support from them when Romney entered into the calculations. Christie down 3.3 Ryan down 2.4 Rubio down 2.4 Bush down 0.7.

Perry dropped 1.4 points which might indicate that his supporters are to a degree inclined to the Establishment block. Including Perry, this group lost 10.2 points. With both Romney and Ryan now gone it would seem natural that Bush will be the main benefactor in ensuing polls as the fact is polling hardly dropped at all when Romney entered the lists.

The weakest group appears to be the Centrists. However should Bush stumble the current "next" Governor Walker would seem to be well placed to receive a sudden influx from Establishment voters. Certainly the media is starting on his bandwagon and a Bush or Christie stumble might see him vault into a substantial lead. Whether having a substantial lead and having ones head so far above the parapet so early  in the piece is a good thing "President Hillary Clinton" might be able to answer.

Of all the three groups it is, I believe, the Conservative one which faces the most difficult hurdle. There does not appear to be a conduit able to run from disenchanted Establishment voters to any of the names in the conservative group. I don't see Romney/Bush/Christie supporters lining up to support Huckabee for example.

Paul voters are probably bedded in for the duration unless he chooses not to run (he has to decide if he wants to be a senator or run for president he can't do both). But if Walker stumbles or Perry fails out of the gate then there is, I believe, some degree of support that could move to a conservative.

However 25.3% is not to be dismissed. If conservatives move en mass to one of the current possibles, or more probably to Governor Palin if she chooses to run then, with some influx from the centrists supporters (surprising to some Silver showed that, for all her conservative support, Palin is placed in the centrist camp policy statement wise) Iowa and South Carolina could be won.

Presuming an establishment candidate stayed in the hunt that person  (or persons) should win a solid block of convention delegates but not enough for an outright win at the convention-nor enough that wheeling and dealing would put him or her over the top.

The most likely end result would be (and please let it be so as the drama has been a long time coming) a multiple ballot convention. If that would happen then it could go either way, or if the balloting went on long enough a dark horse might be chosen by ballot switching or an outsider might be drafted.

My personal belief is that the best result for the Republican cause, and the country would be a historic compromise with a Conservative/Establishment team-but this time with the conservative at the top of the ticket.


FAIR USE NOTICE:
This site contains copyrighted material the use of which has not always been specifically authorized by the copyright owner. We are making such material available in an effort to advance understanding of environmental, political, human rights, economic, democracy, scientific, and social justice issues, etc.
We believe this constitutes a ‘fair use’ of any such copyrighted material as provided for in section 107 of the US Copyright Law. In accordance with Title 17 U.S.C. Section 107, the material on this site is distributed without profit to those who have expressed a prior interest in receiving the included information for research and educational purposes.
For more information go to: http://www.law.cornell.edu/uscode/17/107.shtml
TITLE 17 > CHAPTER 1 > § 107

§ 107. LIMITATIONS ON EXCLUSIVE RIGHTS: FAIR USE
Notwithstanding the provisions of sections 106 and 106A, the fair use of a copyrighted work, including such use by reproduction in copies or phonorecords or by any other means specified by that section, for purposes such as criticism, comment, news reporting, teaching (including multiple copies for classroom use), scholarship, or research, is not an infringement of copyright.
In determining whether the use made of a work in any particular case is a fair use the factors to be considered shall include—
(1) the purpose and character of the use, including whether such use is of a commercial nature or is for nonprofit educational purposes;
(2) the nature of the copyrighted work;
(3) the amount and substantiality of the portion used in relation to the copyrighted work as a whole; and
(4) the effect of the use upon the potential market for or value of the copyrighted work.
The fact that a work is unpublished shall not itself bar a finding of fair use if such finding is made upon consideration of all the above factors.
Copyright issues e-mail to:
holprof57@yahoo.com