Trump has gone from 11 points behind on August 28th to just 2 having risen 5 points as Hillary dropped 5.

Libertarian Gary Johnson and to a lesser degree the Greens Stein at 18 points (up from 16) may play the crucial "Nader" role as per 2000 when Bush won the state and the presidency.

If Trump wins New Hampshire with the aid of Johnson then he stands to almost exactly repeat G.W.Bush's Electoral College win in 2000. See analysis HERE 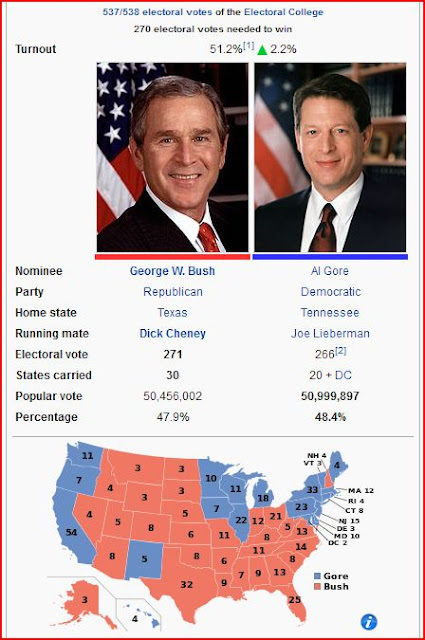 "The 2004 Bush versus Kerry  election (the latter is still a major player in some way in the 2016 scenario, even as a ghostly echo) turned on national security.

That Bush was competitive after the "stolen" election of 2000 when Al Gore won the popular vote handily was enabled by the aftermath of 9/11. Bush's handling of that (pre-the Iraq invasion) and the Homeland Security success kept him competitive.
It can be fairly said that Bin laden's intervention in the campaign with his video threats ensured that, in the final analysis, national security was the paramount issue that gave Bush the narrowest of wins percentage wise of any re-elected president.

"Kerry blames defeat on Bin Laden"
Although Bush won the popular vote handily he won Ohio,and the electoral college majority by a football stadium crowd size majority and won Iowa/Colorado/New Mexico, all states that went subsequently for Obama, by wide margins.
I have little doubt that in the end the 2016 election will also like 2004,no matter the twists and turns between now and November, also come down to "who is best to answer the 3 a.m. call."
Trump's likeabilty, which will improve over time, is not the deciding factor although his honesty, which polls shows is rated higher than Hillary's may have some input, but rather "who has the strength to keep my family safe in this dangerous world."
President Obama and Former Secretary Clinton have tried and failed. Nice, and the previous international terror examples, plus Ft.Hood, Boston, San Bernardino and Orlando stand as proof."

Subsequent polling has shown that both Trump and Clinton are the most unpopular candidates ever known.
The RCP aggregate polling has Hillary at 41% and Trump at 38% just  79% combined.

Libertarian Johnson 8% and Greens Stein 3% with 10% so unhappy with the four choices they can't make up their minds.

History shows that third, and especially fourth candidates, always decline on election day and it would be most surprising if Johnson got 8%. Green might pick up some dissatisfied Sanders voters, if they turn out which is always a problem with young voters.

The key facts are that it doesn't matter what the Johnson/Green vote is nationwide it does matter a lot what it is like in the key states. Ralph Nader took just enough votes from Al Gore in New Hampshire (3.60%) and Florida (1.93%) to ensure the eventual election of G.W. Bush who won Florida by 0.00187799158% despite getting only 2.74% nationwide.

As of today Clinton has a tiny lead in the Florida aggregate polling of  2.7 points. In Ohio Clinton's lead with the four candidates.

If Trump wins the "Romney states"  and Florida/Ohio/Pennsylvia (or Florida/Virginia/Ohio/ Iowa) he will win in the electoral college. Those states are the ones currently most effecting the Trump/Clinton race to the required 270 (actually 269 in Trump's case with Florida/Ohio/Wisconsin) electoral college votes.

2016 is shaping up to be a combination of the 2004 national security election and the 2000 election where the winner has less popular votes but won in the electoral college with the help of minor parties. Let's hope it doesn't take a 4/4 divided Supreme Court to have to decide who the winner is.