As "Republican" Establishment RINO's desert Trump
the populist bitterness will only intensify and split what's left of the GOP into three if Trump loses. 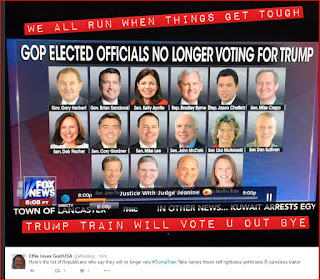 
Hillary's "Basket Of Deplorables" vile words, for that is what they are, categorizing millions of Americans as racists haters will absolutely ensure four years of bitter division. American simply can't afford a Hillary presidency.

Conservatives accepted the election of  Barack Obama in 2008 with good grace as witness his 85% approval rating at the commencement of his first administration.

The feeling was that Obama's landslide genuinely represented the overall mood of the nation after the Bush years and its wars and that the financial crash made McCain's election impossible.

This Monroe type "era of good feeling" was brief and Obama's polices led to the Tea Party explosion, the  "Birther" movement which, as eccentric as it was, had its basis in a strongly held disappointment with Obama's policies, and the mid-term disasters for the Democratic party.

Obama's reelection passed without too much Republican angst as presidents are reelected more often that not and Romney was not the most stellar of campaigners. As in 2000 the anger came, once again, in the mid-terms and after that the " grit your teeth and bear it whilst waiting out the end of the lame duck' attitude kicked in.

Conversely G.W. Bush's controversial election in 2000 was accepted by the Democrats in general as there was somewhat of a feeling that Gore had contributed to his own demise, that the left, via Nader, had ensured Gore's loss more than the Florida recount and that, after eight years the opposition deserved their chance.

Hillary Clinton, should she be elected will have absolutely none of the initial good will that Bush and Obama engendered.

It would be foolish to state that Clinton is anything but utterly loathed by the great mass of Republicans of all stripes. The loathing is gut deep and the animus to her appearance, her voice her obviously shady past cuts deep and is irreversible, nothing she could do or say in office could shift it one bit.

The fact that the GOP stands in mortal danger of being split asunder if Trump loses just adds to this feeling of distaste which no other Democratic candidate could inspire. If, or more likely when an economic downturn comes over the next four years if Hillary is the president she would make Herbert Hoover seem like a beloved saint in comparison.

The sight of a mass amnesty for illegals and the floodgates for immigrants, especially from Muslim countries opening would make the Tea Party demonstrations look a picnic by comparison.

Added fuel to this will be the vengeful spiteful "progressive left" who will taunt conservatives after the election in Wonkettian "I drink your salty tears with joy" arrogant glee whilst the leftist media runs endless
"we told you so" articles about Trump and predicts the soon to happen demise of the GOP.

What will make the rank and file Republican's especially furious would be the chants of "the racist, homophobic angry white men's party  and candidate is finished.

This gross insult to flyover country whose folks don't spent their days hating on Blacks and Gays will just reinforce the perceived hate for the "bitter clingers" that so rankled when Obama came up with the concept.

In the end the biggest driver of irreconcilability will be the awareness that nothing can be done about the presidency (the mid-term option will of course come into effect) as demographics makes winning the electoral college for any Republican of any stripe almost impossible.

With California and the east coast permanently blue the needle for a Republican candidate to thread is tiny and with immigration and the growth of the Hispanic population is getting worse.

No "outreach" to the Black and Hispanic communities is going to shift enough support, were that even possible, to make a difference in the few battleground states that remain and if enough Hispanics get to the polls in Texas and that state goes Democratic it would be impossible for a Republican to be elected president ever again (barring of course a "1929").

All of the above will come into play the day after the election should Hillary win and her "honeymoon" would be the briefest of any president. As soon as some negative event for the administration happens, which of course it will, what the social and political landscape will look like at that point is unpredictable but it won't be pretty.
Posted by M. Joseph Sheppard at 2:35:00 PM