Could The GOP Fall One Agonizing Vote Short In 2016? But Demographics To Change All From 2020

This article is also at THE AMERICAN THINKER  LINK


Putting aside the prospect of an Hillary Clinton candidacy for the 2016 presidential election, the GOP has an extremely hard row to hoe, or needle to thread if that analogy suits the situation, in the Electoral College.

If on election night 2016 the early returns show that Florida has gone for the Democratic candidate, that would be an indication of an early night for Republicans as there are no realistic Electoral College permutations that would give the GOP candidate a victory.

With Florida won and out of the way, all the “Romney” states won in 2012 also have to be won and Ohio, that classic balance tipping state tipping into the Republican column. But even with Ohio on board the big problem for the GOP candidate is Virginia. If the influx into Northern Virginia which, allied to the increase in minority turnout for Obama, means that the state is now firmly in the D column then the path to the required 270 Electoral College votes appears doubtful if not impossible.

The best the Republican candidate could do without Virginia, and with both Colorado and Iowa, two states that went solidly for Obama in 2008/12 wrested back is 268 Electoral College votes. This heartbreaking, desperately close result, would actually be one vote short as at 269 votes apiece the tie would be decided by a majority of state delegations in the House of Representatives (presumably with a Republican majority in 2016 as there is currently).

At this writing, both Iowa and Colorado are looking positive for the GOP but, apart from a significant economic downturn, it is an huge ask for those two states plus Ohio, plus one from New Mexico, Nevada, Michigan, or Wisconsin to end up in the Republican column.

Of course Virginia might swing back to its historic home in the red state column, or Michigan might continue on its apparent swing to the right, but these are very difficult challenges for the GOP machine.

These difficulties might be addressed by having a Southwestern governor like  Susana Martinez on the ticket which could put both Nevada and her home state of New Mexico in play, or similarly,  Governor Snyder of Michigan, presuming he is re-elected this year,or Governor Walker of Wisconsin as the presidential candidate. However, failing the needle being threaded and these required, and frankly, long-shot states being won it may be that population drift will eventually come to the GOP's aid.

After the 2010 census there was a  net gain to the Republicans of 6 Electoral College votes as the population movements from the Northeast assisted the growth of Texas and Florida in the Electoral College. If, as seems likely, the April 2020 census gives a further net gain of 1, or even better for the Republican prospects, 2 Electoral College votes, then Virginia can stay in the Dem's column and the GOP can win a squeaker in 2020, if the census can be tabulated in time for the election. If not 2020 then 2024, and quite possibly numerous elections well into the future.

Projections in an Harvard study are for Arizona, Florida, Nevada and Texas to have the largest population growth which, if the GOP attracts some growth in its Hispanic support may be enough to ensure its long term success or Texas by itself may ensure it. 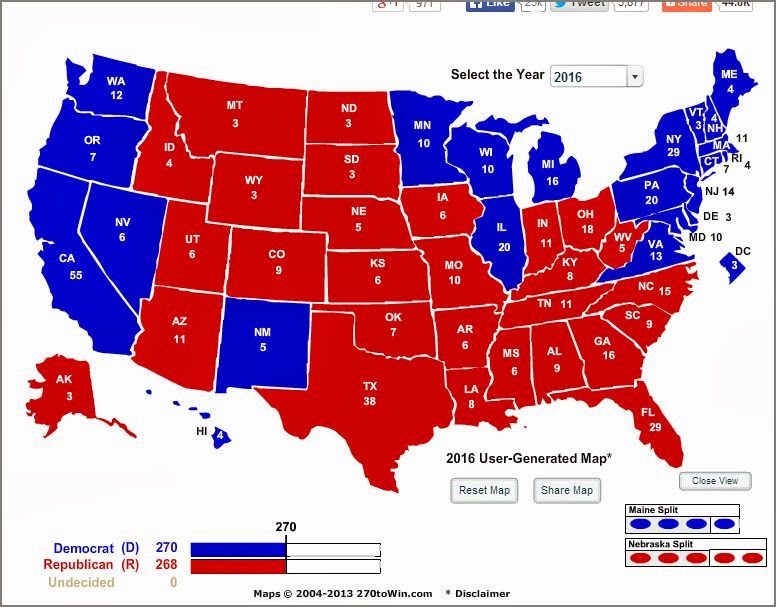