Unlike the self described "Commie Mom" with her antagonism to what she describes (below) as "bone-grinding capitalism" I have actually been to Communist China, this year, and have seen, as per this picture, the result of "care" for people under the Communist "cultural revolution." 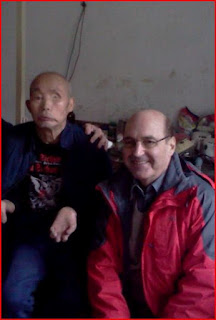 I used to, and for the main part still do, consider "Reds under the beds" folk as being in the same orbit as the "Trig is not Palin's son" and the "9/11 was a government conspiracy" monomaniacal people. However, whilst the latter two are mad concepts, recent events have given pause for thought as regards Communist influence in the media and government.

No there is not a massive conspiracy of communists waiting to overthrow the American way of life but yes, there are people of influence who are what is termed "red diaper babies". That is, they were exposed in their formative years to Communist thinking by a close relative or associate, and that exposure is reflected in the far left or statist viewpoints they express. The danger is that because of their positions of influence this ultra-leftist viewpoint, watered down as it may be, distorts the thinking of immature minds who are exposed to the media or government outlets these people inhabit.

We are considering people who are not minor figures but who, in some cases, have significant input into government and a mass media following. This reality is important when one considers the historic influence of e.g. the British Communist Party which, although small in numbers, caused massive economic dislocation in Britain in the 1960's through its control of major trades unions. The Communist led unions caused massive disruption to British exports through a disastrous dock strike, and the British motor industry was similarly crippled by the actions of Communist shop stewards.

Thus if "red diaper babies' are in positions of influence and power, it would be a mistake not to examine their history and actions, and to consider the influence they have today in America.It is also important to look at this dispassionately and factually to avoid being tarred with a scaremonger, or conspiracy minded label, which would distract from the reality of the situation.

The redoubtable professional journalist Robert Stacy McCain did a devastating analysis of the Communist family history of presidential confidant Axelrod
AT THIS LINK. The very definition of a red diaper baby.

Obama administration special advisor Van Jones had to resign because of a double whammy of conspiratorial past history-a 9/11 Truther-and membership of an organization "with Marxist ties." Here is an excerpt from The Washington Post report:

"Jones, who joined the administration in March as special adviser for green jobs at the CEQ, had issued two public apologies in recent days, one for signing a petition in 2004 from the group 911Truth.org that questioned whether Bush administration officials "may indeed have deliberately allowed 9/11 to happen, perhaps as a pretext for war" and the other for using a crude term to describe Republicans in a speech he gave before joining the administration.
His one-time involvement with the Bay Area radical group Standing Together to Organize a Revolutionary Movement (STORM), which had Marxist roots, had also become an issue. And on Saturday his advocacy on behalf of death-row inmate Mumia Abu-Jamal, who was convicted of shooting a Philadelphia police officer in 1981, threatened to develop into a fresh point of controversy."

The highly respected British newspaper The Daily Telegraph ran an article (excerpt below from link at left) on what they saw as possible Communist influence on the young Barack Obama. Obama later joined, according to THIS REPORT the far left socialist "New Party" in Illinois:

New details about a black poet in Hawaii who was a key early influence in Barack Obama’s life can be revealed by The Telegraph.

"Although identified only as Frank in Mr Obama’s memoir Dreams from My Father, it has now been established that he was Frank Marshall Davis, a radical activist and journalist who had been suspected of being a member of the Communist Party in the 1950s."

Here is another report;

Frank Marshall Davis
http://www.discoverthenetworks...
Communist writer and poet (1905-1987)
Mentor to a young Barack Obama in the 1970s
Dedicated supporter of the Soviet Union and enemy of America
In the very early 1970s Davis met a young Barack Obama, whose mother had sent
the boy to live with his grandparents in Hawaii. Obama's grandfather, Stanley
Armour Dunham, arranged
for Davis to become the boy's mentor and advisor.
From approximately 1971-79,
Davis had considerable
influence on the young Obama, particularly during the last four of those
years.
(Notably, Davis once sat on a union-publicity committee with Chicago
Sun-Times reporter Vernon Jarrett, father-in-law of Valerie Jarrett,
the latter of whom
would later become a close confidante and advisor to President Barack
Obama).In the early Seventies, Davis sold marijuana and cocaine from a
hot-dog cart which he operated near his home in Waikiki.
http://www.aim.org/aim-column/..

In the media, or rather the blogosphere one of the most influential and widely read leftist sites is "Wonkette". Recently a new editor, Rebecca Schoenkopf took over the running of this radical site and a new, even further left tone followed shortly. Wonkette, to give an idea of the "standards" it runs by,  made itself notorious under its previous editor for its disastrous article attacking Sarah Palin's challenged son Trig whom it called a "retard". there was a massive outcry from decent people from all
walks of life and for a time the site lost nearly all its sponsors.

Schoenkopf   managed the difficult feat of standing at the very pinnacle of
the sites sexist, anti-conservative Blacks/women, filthy mouthed commentariat
with her statement:

"The Poles believe this is a terrible slur against Poland.
Your Wonkette thinks it takes considerable chutzpah and/or balls to be more offended that Treblinka was
called “Polish” than that it existed. Your Editrix, as a Polish-Russian Jew, thinks Poland can go fuck itself."


Presumably "Poland" would include the Polish airmen who fought the Nazi's as courageous
RAF pilots, to whom there is a monument on The Embankment in London. Nobel Prize winner Lech Walesa, and the Polish people who endured decades of Communist repression and who died in two revolts against Communist tyranny.Not forgetting of course the tens of thousands of   the elite of the country who were massacred, by the Communists at Katyn.The estimated 3,000,00 Poles who saved 450,000 Jews from the Nazi Death camps are presumably also included in Schoenkopf's exhortation.

From where might this frame of mind come? Is Schoenkopf another "Red diaper baby'? Here is an excerpt (emphasis mine) from a blog called "Commie Mom"
AT THIS LINK


"have settled on telling you a little bit about how we, Rebecca and I, came to be Commie Girl and Commie Mom.
So. How did all that Commie business start, you ask?
It began when Commie Girl was in high school. By then I had dragged all my children, from early childhood on, to innumerable marches like the United Farm Workers’ marches for workers’ rights with Cesar Chavez himself leading us, demonstrations against war and for peace in places like Nevada, political meetings of the anti-nuke variety which led us to people like Edward Markey, (do NOT say, “Who?”) Democratic candidacies of folks like Jerry Brown and Phil Angelides (don’t you dare say “Who?”), knocking on doors and standing on street corners, and all manner of what-have-yous, all in the Lefty vein. (Actually I didn’t drag my children. They went happily. Mostly. Because Lefty stuff is FUN!!)
So, because I was a big Lefty and all, involved in anti-nukes, anti-war, Mother Earth, the United Farm Workers and all labor unions including my own United Teachers of Los Angeles, and every election that came down the pike, Becca’s friends began to call me Commie Mom.  Back then, the rightwingers of the Reagan era called everyone who was left of center a commie.  Or a commie pinko.
Well, it turned out I actually WAS a commie. In the communicating, communion, community, communal, commonweal, common folks, “workers should own the means of production” sense of the word.  I have always thought Karl Marx was right about corporations and capitalism and all its bone-grinding horror.

And a statement from her own autobiography at "Commie Girl Collective" AT THIS LINK where she makes this comment:

"Are you really a Communist? No. I am a socialist."

Well we will all just have to take her word for it won't we? What we do know is that Schoenkopf, as recently as July 19th, ran this article decrying what she terms as
"Reds under the beds' which is exactly the sort of Alinskyite response to anyone bringing attention to possible Communist influences-like my post, as I am sure will be the case.

Caroline Glick, writing in The Jerusalem Post issued a stern warning about the influence of radical Jewish socialists in America in her article "Defeating The Jewish Alinskyites." Unfortunately for Schoenkopf, both Glick and I are card carrying Jews so she will have to mount some other line of attack.

I posted an article, "Palin Is The Media Liberal Jew's Mistaken Golem And Primal Scream Therapy"  on why the Jews are, in the main, leftists, and if they can be weaned from "tales learned at grandad's knee." Michael Walzer at the Jewish focussed magazine 'The Tablet" in his article "The End Of The Jewish Left" seems to think so, but I am not so sanguine. As long as people of influence like Schoenkopf   et al pump out their radical leftism into calcified older minds, and underdeveloped young minds, the battle will be challenging.