For The Record.Polling Shows McCain Had No Chance Of Winning In 2008 And Palin Was Only Reason He Was Briefly Ahead

Real Clear Politics LINK has a series of state by state tracking polls for the 2008 presidential election. This type of analysis, used to perfection by Nate Silver of 538.com fame turns out to be the best predictor of final results on election day (Silver was 100% correct in 2012 using this method).

Looking at the final election results in the map below of the states where McCain led after Palin's VP nomination speech (but were eventually lost ) if they were won by MCain/Palin i.e. if the financial collapse had not happened before election day then McCain would have been five Electoral College short of the 270 required to win.

Thus if Florida/North Carolina/Virginia/Ohio/Indiana/Nevada and the one Nebraska vote which totalled 92 EV's were added to the 173 he received on election day he would have ended up with 265 Electoral College votes-5 short. 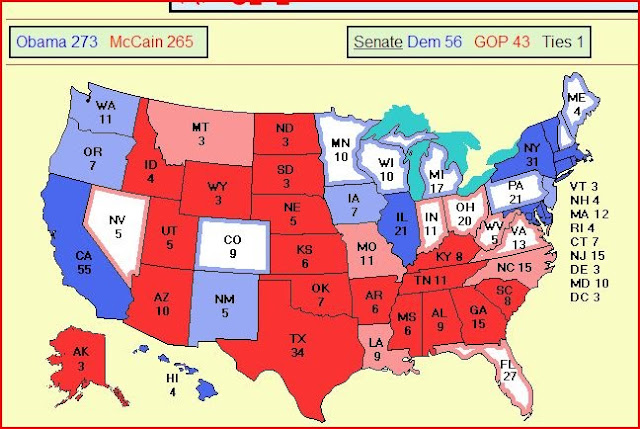 New Hampshire's 4 EC votes would have brought him to a 269/269 tie at which point the House, with A Democratic majority, would have chosen Obama. Thus McCain would have needed to win any of Iowa/Colorado/New Mexico. The following tracking polls show that at no time-even at the height of his post convention, Palin created "bounce" would he have come anywhere near to winning any of the three. In fact in none of the cases was the polling even close, and in Iowa for example, it was landslide territory. 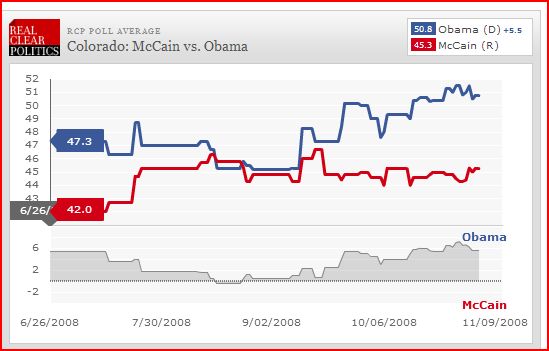 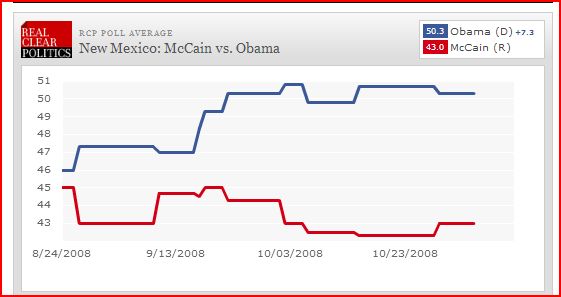 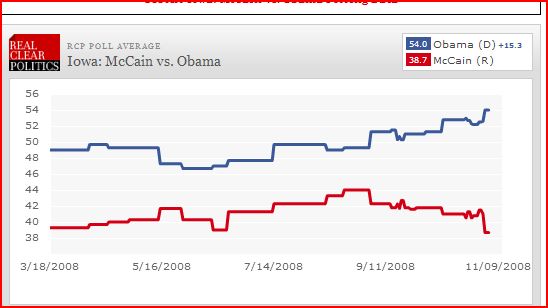 
No, Sarah Palin Did Not Cost McCain the Presidency

To the point of redundancy, every discussion of Romney's eventual vice-presidential pick always leads to a snarky comment about "avoiding a Palin" or how Palin lost the election for John McCain. The argument is old and tired. But more importantly, the argument is false. To believe that Palin "cost" McCain anything you would have to ignore all poll data before and after Palin was selected, the enormous cash advantage of Obama, the historical obsession with Obama, the ad-war landslide in favor of Obama, McCain's odd campaign suspension, and the fact that before Palin, McCain could barely fill a high school gymnasium. So, let's examine reality and put the Palin-bashing to bed.
If you look at the 60 polls prior to Palin being selected as McCain's running-mate taken from June 1st through August 29th this is what you would find:
John McCain and Obama tied in 2 polls
John McCain led Obama in 5 Polls
Barack Obama led John McCain in 53 polls.

Yes, for every one poll that showed a McCain lead, Obama held a lead in 10 polls. In that span, Obama's lead in the polls was close to 6 points, fairly similar to the final outcome. I'm not sure how it was Palin's fault that McCain was getting throttled before anyone knew who she was.
A week after the selection of Palin, the Republicans would hold their nominating convention and Palin delivered a speech for the ages. Her favorable numbers immediately soared. In fact, her favorable numbers at that point were greater than those of Barack Obama. A CNN Poll had Palin's favorable ratings at +30 (Obama was +26), Newsweek had Palin at +30 (Obama at +20), and NBC News had Palin at +20 (Obama +21). The McCain-Palin ticket suddenly lead Obama-Biden in 7 polls, tied in 3, and trailed in just 2. Palin's highlight-reel speech was a big factor, but a bit of those leads had a lot to do with the traditional "post-convention bounce," too.
Many try to blame the campaign's subsequent downfall on Palin's interview with Katie Couric, but that doesn't sit well with the facts either. After the convention bounce, and before the Palin-Couric interview, Obama led McCain in 8 straight polls by margins of 5, 6, 5, 1, 4, 2, 9, and 4 points.

So why did John McCain really lose?

First, the real turning point was when McCain ridiculously and bizarrely "suspended" his campaign on September 24, 2008 due to the financial crisis. He led in one of a dozen polls before the announcement (by 1 point), and would go on to trail in every one of the 100+ polls taken and included in the RCP average following that move.