Hidden Factor To Give Palin Edge On Clinton In A 2016 Presidential Match Up?

Thanks so much for reading our blog. It makes you part of the smartest, most diverse and open-minded community on the web.
That's why we've begun a new experiment in web economics: no ads; no corporate owners; just readers paying for content they enjoy and value. For unlimited access to every post in its entirety , we're asking for a subscription of either $19.99 a year or $1.99 a month - or more if you really love us. Via Paypal

As can be seen from this excerpt from OMG Facts (link) since 1900 i.e. from the days of mass communication, the taller of the presidential candidates has won 75% of the time. The article links to the Wikipedia source which goes into the matter in much depth


"Since 1900, the taller candidate has almost always won the presidential election.

Every 4 years when the presidential elections rolls around, analysts look at polls, platforms, and marketing techniques to predict which candidate will eventually win. Perhaps, to save a bit of time, they should just take a quick look at the candidates’ height! Statistics show that since 1900, the taller candidate has won the election 75% of the time.

Some political and cultural experts say that this is because the public unconsciously favors taller people. In a 2003 essay by New York Times writer Virginia Postrel about artificially increasing the height of growth-stunted children, she says; “Still, being short on average, does hurt a person’s prospects...The tall guy gets the girl. The taller presidential candidate almost always wins.”
(Source)

However new territory as regards this matter is quite possibly fast approaching-2016 may see not just one but two female presidential candidates representing the two major parties for the first time. If that is the case, and it is Hillary Clinton versus Sarah Palin, it opens up to question a number of factors which hitherto never arose.

Will the height factor which Postrel considers so important in "getting the girl" matter when it comes to a presidential election when both candidates are female? What about the high heel factor? Palin is well known for favoring impressively high stiletto's whereas Clinton is, perhaps, more thought of as a trouser suit and flat shoes person in her public persona.

Would such an artificially created
height difference make all the difference in a close election? These are questions that have ever arisen before, and will no doubt be the subject of much sociological and political research and controversy.

There is some historical reference in that the Green Party ran a women as their presidential candidate in 2012, but she did not participate in the major debates.

Palin, and before her Geraldine Ferraro, both ran for the vice-presidency but those campaigns were against men and there was only one VP debate which had little effect on the overall campaigns. Thus it appears that the question, should it arise in 2016, will add another dimension to what could be an historic campaign for so many reasons.

Who would be at the historic disadvantage, all things being equal, if it were a Clinton versus Palin match up? The answer appears to somewhat murky as a number of internet sites gives many different heights for Mrs. Clinton. So the question arises-what are Secretary Clinton and Governor Palin's heights?

The height of Governor Palin also appears to be somewhat murky. Answer.com states she is 5 foot four and three quarters in height whilst Wikianswers states she is a full five foot five inches.

Thus is Wiki is correct for Palin, and Ask.com for Clinton, then the odds are well in Palin's favor should the historical tendency play out for women.
Under normal circumstances Governor Palin's management experience and common touch would
make her the odds on favorite, but the height factor may be a dimension that has escaped the political writers thus far.

It may well be that should the economy show no improvement in 2016, and these two are the nominees, then the only hope for Secretary Clinton, given Governor Palin's obvious advantages, would be if Wiki is correct about her height.

But could she compete with this? 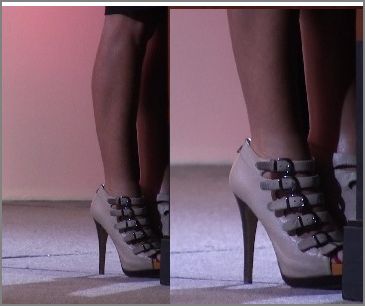 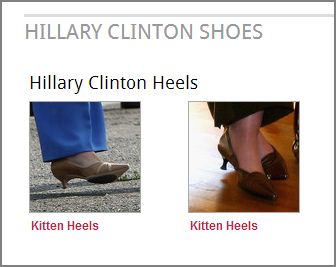