The Fed meets Sept 21/22 This is their last chance (Wed 21st) to show who the monied interest wants as president. If they raise interest rates the share market will go into a nosedive which would probably be the final nail in Hillary's coffin.

The Fed has plenty of leeway either way as this article sets out;

Basically the Fed has two mechanism which they can use to either raise  interest rates or keep them as they are;

"The Fed doesn’t use CPI to judge its performance, but relies on the personal consumption expenditures (PCE) measure instead."

The CPI is rising and PCE isn't so they can use either one to justify whatever move they make.If they raise interest rates and the market tanks it will not be for love of Trump, rather it would be to stick him with the (inevitable) recession.

If they don't raise interest rates they are either happy to prop up Hillary indefinitely or will prop her up till she takes over in January and then have a short correction propped up by more money printing.

Update#3 Ben Bernanke was interviewed on BBC's "Hardtalk" program.The interviewer Steven Sackur, asked him;'"You've been accused of acting politically over the collapse of Lehman brothers." Bernanke replied, we had no choice but to let it go as we did not have the tools to save it."
Sackur "But you saved AIG?"   Bernanke" It had assets we could use."

The Reserve Bank with its access to the printing press as per QE 1-4 and its trillion of printed dollars could have easily saved Lehman. It did not and McCain was left floundering and within days Obama came from behind and was never behind again.

Update #1: "drmac" at C4P makes the following comment which, in my opinion, adds to the overview I originally presented. The facts, as know, are challenging and given the various forces supporting an Obama presidency,the leftist media (to the point of a "Journolist conspiracy" and the financial establishment looking to an accommodative Fed,whether or not there was a decision to let, or facilitate, a crash to destroy the McCain/Palin election chances is worth considering:


"I find this scene disturbing, but of course no one on the Political Right will have anything to say, and the entire LEFT are cheering it. For those that had no understanding of Hank Paulson's role in determining the outcome of the 2008 Election, it will mean nothing. For those that were upset that Paulson took over the last three months of Bush's Presidency, including the TAKE DOWN of Lehman Brothers, which he KNEW would result in the Wall Street Stock Market crash, and ALL Parties KNEW from the day the TAKE DOWN was announced, determination of the outcome of the 2008 Election was no longer in doubt (the day before the announcement McCain/Palin were leading in the polls, this appearance on our Gov't Network -Cspan- should resonate as a very troubling site.
It is bad enough Paulson never apologized to the American people for interfering with our nation's most sacred proceeding (the choosing of our President for the next four years), but how inappropriate is it for him to be sharing the stage with the man who MOST benefited the MOMENT Paulson ACTED. One cannot blame Axelrod for Celebrating Paulson's entry into the 2008 Campaign, but for Paulson sharing this VICTORY!
Paulson and Paulson alone set the stage for Obama's victory. A stage up to that point had no answers for the arrival of Sarah Palin. Paulson's ACT set in motion an entirely different campaign.
I would love to know what Sarah Palin is thinking when she sees this video:"
http://www.c-spanvideo.org/pro...

"They're not going to let it happen" and I said Well,I don't know; maybe the will" 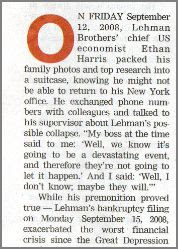 The last thing I am is a "conspiracy theorist" but in the case of the 2008 presidential election the astonishing turnarounds that took place just after the Republican convention and the economic calamity in late September are near to being beyond anything that can be considered as a normal occurrence.

In its simplest outline the facts are these; John McCain's campaign was dead in the water. Barack Obama "the one" had just delivered his nomination acceptance speech to a rapturous convention and the accolades of a sycophantic, part conspiratorial (yes, see "Journolist conspiracy" LINK) media reception.

At that point, according to the analysis of the widely respected "The Votemaster" at Electoral-Vote.com LINK  using the same poll accumulation method that Nate Silver at 538.com does to wide acclaim, Barack Obama was running away with the election in the Electoral College as pictured below, and also in the various popular vote polls, Gallup etc. 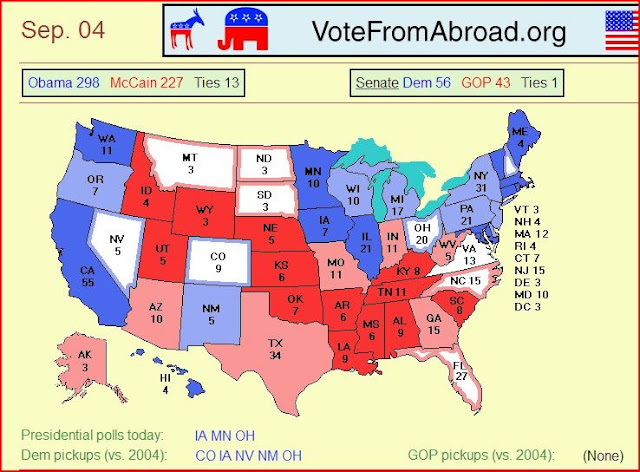 Then John McCain stunned the political world with his selection of Sarah Palin as his running mate and on September 5th she delivered what is considered one of the best and most influential convention addresses of all time.

The GOP rank and file, previously lacklustre in its support, was solidly behind the McCain/Palin team and within days the huge gap between McCain and Obama was not only closed but in the popular vote McCain surged into the lead-Bill Kristol;"Sarah Palin gave McCain the best two weeks of his campaign."

On the Electoral College map for September 12th McCain/Palin had reached the 270 Electoral College votes to win the presidency and, for the first time that would have been seen in the leftist media, doubts and concerns about the previously inevitable Obama win became apparent. A full map history of those dramatic weeks is AT THIS LINK 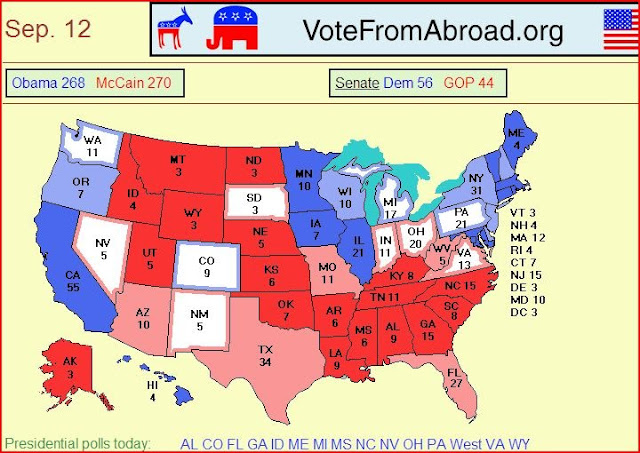 Then from September 16th onwards the share market collapsed bringing mass unemployment, huge concerns for the average American and McCain's advisers giving him the wrong advice; "put the campaign on hold, don't campaign in Michigan, hold back Palin."

Here below are a few comments which illustrate the events of the time and the feeling that it would benefit the Democrats. From that day onwards, except for one day when the lagging polls had not caught up, the McCain campaign was behind, irretrievably, in the popular vote and Electoral College (as the map indicates) and the campaign was effectively over.

The questions are valid; did the Eastern elites who knew the parlous state of their system, who contributed such huge financial support to the Obama campaign, decide that they were going to have a Democrat in the White House who would allow the huge increase in Reserve Bank money creation that would prop up their banking system no matter what?

It would have been in their interest to bring on the collapse of a few major institutions to ensure that their banking structure receive massive injections of cash and thus prop up the remaining ones? Decision were taken to allow the ones that collapsed, specifically Lehman Brothers, to collapse when it would have been possible to prop them up.

Leftist Noam Chomsky tiny.cc/onu41w  now agrees that Palin was right about Obama in 2008
and further, "Palin,when she was making fun of ‘hopey changey stuff,’ she was right; there was nothing there-that there was no substance to his presidential campaign"

That being the case it is quite possible to conclude that the "empty suit' was going to win no matter the cost in unemployment and economic dislocation even if it took losing a few, albeit major, pawns along the way.

"The economy is back"