Carson Is The Biggest Danger To Trump-By Not Running

Given Dr.Carson dramatic and seemingly unstoppable decline in the polls it would seem odd to suggest that in reality Dr. Carson currently poses the biggest threat to Donald Trump's so far unstoppable poll rise to the nomination.

The graph at the 'Real Clear Politics" poll of polls aggregator tells a story even the most partisan would find impossible to deny. 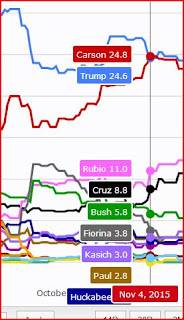 On November 4th Carson became the only candidate to pass Trump (albeit by less than 1 point and for three days) since his rise to first place on July 20th. It is a sorry story for Carson since then. 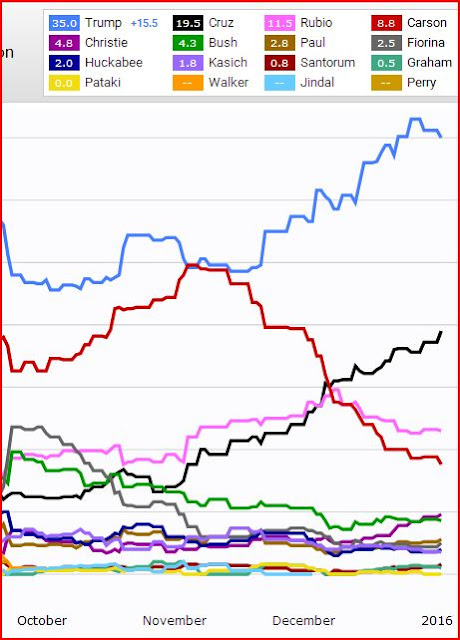 As things stand there is clearly no further direct threat to Trump from Carson in the polls or as an opposition candidate. The danger is that should Carson drop out in the near future it could present a very difficult hazard for Trump. If he did so before Iowa and frankly with Dr.Carson anything is possible, it would, almost certainly, give Cruz the win in this first up state.

There is no need to dwell on why Dr.Carson's campaign imploded. The basic facts of his life story coming unstuck, and his inability to deal with foreign policy questions in the debates are well known, and the graph above tells the tale. Going forwards this is the real area of concern for the Trump campaign and a possible bonanza for the Cruz team;

If Carson's campaign implodes before Iowa the risk to Trump is manifest; 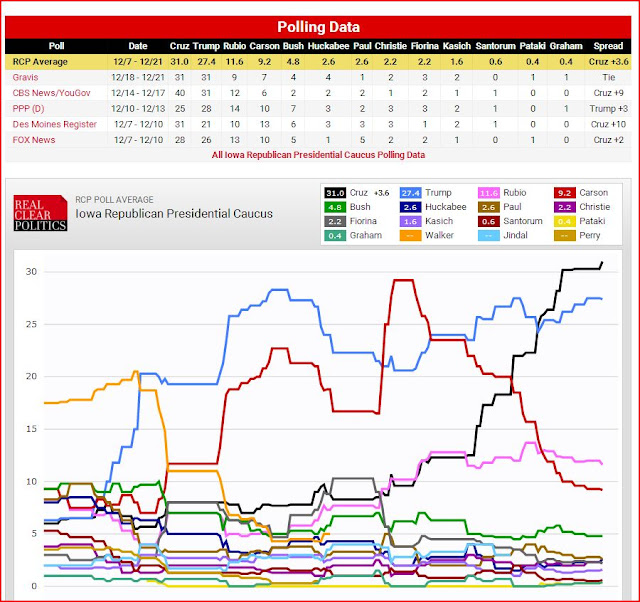 Carson's decline is even more dramatic in Iowa than nationwide. He lead the field at 29.2% to Trump's 20.6% and Cruz 9.6 as recently as October 26th. Since then Trump has risen 7 points and Cruz a massive 21 points. Clearly the bulk of Carson's support has gone to Cruz who has made a major appeal to Iowa's strong Evangelical voters.

If Carson left the field (and there is still a month to go so again, anything is possible) even if he didn't endorse Cruz it would seem logical that the bulk of his residual support would go to Cruz. If Cruz picked up 6 points from Carson that would put him about 37% and the most likely winner of the Iowa caucuses.

The resulting publicity (not to say the media hate Trump frenzy which would continue like an avalanche for the next week) and the possible endorsement of Cruz by Huckabee who said he would leave the fray if he didn't do well in Iowa (and possibly Santorum as well) could have a significant impact on next up New Hampshire. Actually even if Huckabee and Santorum didn't endorse Cruz it would seem logical that some of their support ( as small as it is ) would go to him. 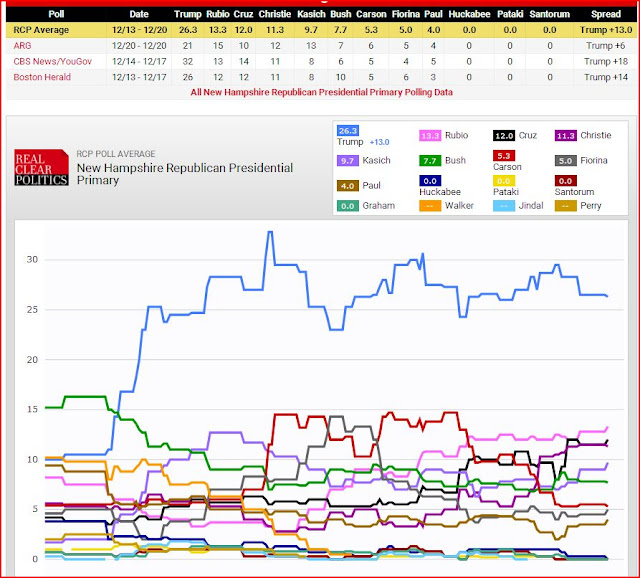 On the face of it, even with a tailwind from Iowa Cruz would seem unlikely to win New Hampshire. But with Carson's voters and anything gleaned from Huckabee/Santorum, Cruz would be a solid second in a state where such a position would be called a "win" by the media and no doubt by his team as well.

Which takes us to Nevada and the danger to Trump from a Carson collapse is obvious;

After that South Carolina; And then a further run of the Southern states including Texas where Cruz is well placed.

All Trump supporters should wish Dr.Carson well, the very best for the new year, and that he sorts out his team problems and continues in the race, at at least his current level of support, right up to Florida. Trump supporters can keep their collective fingers crossed as each state goes by and if Carson stays in the Iowa running then a collective sigh of relief will be in order.

But.....it's Dr. Carson so tenterhooks for the next month.