Forget "A Black/Woman/Hispanic"As Trump's VP; Must Be Palin On Merit


A few days ago I examined some of the current thinking about Donald Trump's campaign. One aspect of this was the possibility (and why) of Mike Huckabee being chosen as Trump's VP;

["Mike Huckabee would be the best choice for Trump's VP"
"Huckabee is angling to be Trump's VP and would be the best choice as he will not only shore up Trump's conservative bona fides but ensure that evangelicals don't sit out the election as they did in 2012. This team might deliver Iowa's 6 Electoral College votes which could be vital in a close election. It also adds the experience of a governor to Trump's campaign team."

I have to admit the thought of Huckabee as Trump's VP never occurred to me, being caught up in the "It has to be a woman and if a Hispanic woman even better" concept. But with Susana Martinez in strife that may have come to a conclusion. Certainly Sandoval, Ayotte, Carson and Cruz of course remain front and center in media/Blog thinking, but Huckabee...hmmmm.]


Since then Senator Cruz has gone a seeming televangelist bent

"Sen.Ted Cruz Tells Volunteers:We Can Win ‘If We Awaken And Energize The Body Of Christ”

Look, this is a political campaign for president, Cruz isn't running for Pope. I appreciate that he his pulling out all the stops in Iowa and is making a direct appeal to Evangelicals but frankly, and I am far from alone in thinking this is a bit too much. And anyway, for any Cruz enraged supporters by what I think, the VP slot is off the table as reported in his own words "Cruz stated in an interview a couple weeks ago that he will not be a veep candidate on a Trump ticket."

I would rather see a VP choice chosen purely on the merits of the person. If part of the Trump appeal is a break with the old politics then surely too, as part of that, the old VP choice paradigm has to go.

It shouldn't be of any import for the ticket that the running mate is from a state with x number of Electoral College votes or is from the north or the south. It shouldn't matter if the slot is taken by someone who is not a Hispanic or a Black or a man or a women. What should matter above all with the new politics is that the person is steadfast, honest, a team player and, yes, has Christian principles (but is not a televangelist or a panderer.)

Speaking of the latter Marco Rubio doesn't even enter the equation as far as a VP choice is concerned. So far Rubio will; amend the constitution via article five, a Convention of States, invoke Nato's Article 5, pack the Supreme Court with conservatives to overturn same-sex marriage (Overturning Roe vs Wade is surely next.) It's all too much.

"Most likely not," Trump, the Republican presidential front-runner, said Monday when asked on "The Herd," a sports radio show hosted by Colin Cowherd, whether he'd consider Rubio as his running mate.
"I don't think, frankly, Rubio is going to make it. I think, to me, he's a lightweight," Trump said."

No, the ticket doesn't need Ayotte or Haley, just because they are a woman, it doesn't need Kasich to win Ohio, or Martinez/Cruz/Rubio because they are Hispanic or Carson because he's a Black Christian. The new honesty needs someone with experience in governing, whose personal life is impeccably honest, who has the admiration of millions and can give the ticket added dynamism to Trump's. The only person who has those qualities/qualifications in respect of the job is Sarah Palin.

The fact that Palin is a woman is important but secondary. The fact that she is an experienced honest deeply Christian (without preaching from a pulpit on the campaign trail) person is. The fact that she could take over in the case of a tragedy and bring the country together because of her experience and ability to reach across the aisle is also vital.

I admit I was taken up with the old political game of "balance" but that is just wrong if we are to make a real break with the past. I admit too I was concerned that if Palin was chosen the media and the haters would ridicule the choice-but, you know what, to hell with them all. In the end the VP choice has no effect on the ticket winning so values above all should be the decider in the choice of running mate.

I appreciate that when asked if he would consider Palin as his running mate Trump replied "The Donald sparked rumors last month by saying he would ‘love’ to have Palin as a running mate. "She really is somebody who knows what's happening and she's a special person.’ I don't think she would put herself through that again." But that sentence doesn't contain the word "no." As For Palin herself;

All that matters is Trump wins and if he wins with Palin by his side then all the media and the haters will be tossed in the dustbin of history.

The GOP's 2016 team should run on its merits and the team with the greatest merit is Trump and Palin. 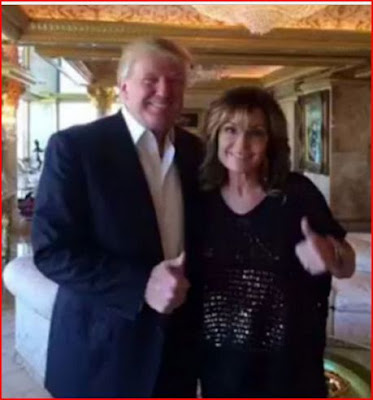