Dem Elector "I won't Vote For Hillary" Could That Cost Her The Election? Yes It Could Quite Easily


First the man and his plan;


"A Democratic presidential elector in Washington state says he will not vote for Hillary Clinton.
Former Bernie Sanders delegate Robert Satiacum told ABC News Friday night that theDemocratic presidential candidate's stance on the environment clashed with his Native American heritage. "I will not vote for Hillary Clinton," he told ABC News. "I will not write her name. I will not. I will not."
The member of the Puyallup Tribe in the Evergreen State says he believes Clinton lied about using a private email server, calling it a "heinous act of stupidity."
"She has done nothing remarkable as Secretary of State or as the senator of New York," he continued. "She's bought and paid for ... I just can't get behind her. There's no character there."
He added, "Maybe I'll vote Mickey Mouse. In all seriousness, maybe I should vote for Bozo the Clown."
Satiacum's defection would matter only if Clinton landed at exactly 270 electoral votes on election night -- and Satiacum still went rogue in the face of immense pressure and weeks of unprecedented litigation.
This means Clinton would need to win 271 electoral votes -- not the usual 270-vote threshold -- on election night in order to ensure she would formally win the presidency two months later.
The news was first reported by the Associated Press.This potential defection prompts technical questions about the obscure process of the Electoral College.
When states are projected and electoral votes from each state are assigned on Election Night, the process is not automatic. Actual people called "electors" meet nationwide on Dec. 19 to cast ballots for president. The ballots are counted in the Capitol on Jan. 6 -- thus formally and officially electing the president.
Electors who do not vote for their state's winner -- dubbed "faithless electors" -- are rare, but they do happen. The last faithless elector was in 2004, when an elector voted for John Edwards for president over John Kerry. A faithless elector has never tipped the balance of a U.S. election, and any faithless elector who tried to do so would certainly face immense pressure and litigation
It's unclear whether the Washington State Democratic Party has a way to replace Satiacum or stop him from casting a rogue vote. State law requires electors to sign and "execute" a pledge that they will vote for their nominee and threatens them with a $1,000 civil fine if they don't. Party rules say party leaders have the authority to fill vacancies caused by "disqualification."
Representatives of the Washington State Democratic Party did not respond to requests for comment on Friday night. The electors were chosen at the state party's convention in June. States must settle all disputes over electors by Dec. 13."
Could there be a Clinton 270 Trump 268 result on November 8th? Yes most certainly and quite possibly actually; 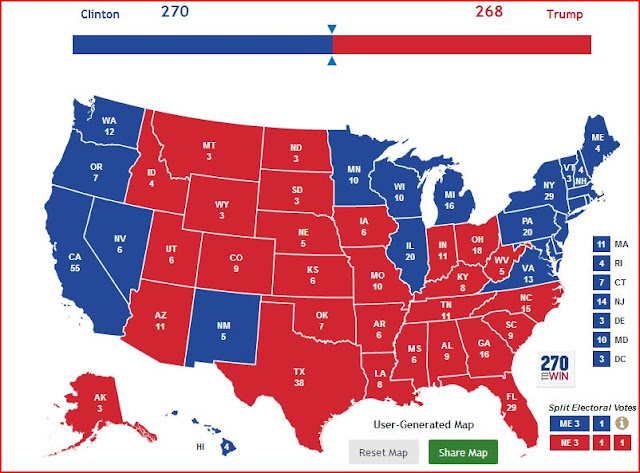 In this example if  Mr. Satiacum held to his promise and voted for e.g. Bernie Sanders the result when the votes were counted woudl be Clinton 269 Trump 268 and Sanders 1.

The decision would be then left up to the House where each state would have one vote based on the majority count of each states congressmen (the Senate would choose the vice-president).

Since the Republicans control the majority of such delegations the could and most likely would choose Trump even if Clinton had won the popular vote and the initial Electoral College vote.

What this would do for the settling down of the country after such a divisive election doesn't bear thinking about-but it is a possibility.