The lamestream media is trying to concoct some sort of "feud" between Sarah and Bristol over Bristol's "relationship" with her soon to be co-star Kyle Massey.The not stated, but implied hint of racism, pervades this whole sorry episode.


"Mounting evidence that Sarah Palin may have bought a $1.7million home in Arizona has sparked speculation she will run for president next year.


But it seems the real reason for the move could be more personal - to keep tabs on her daughter, Bristol.
The Tea Party politician is reportedly furious at the 20-year-old's new relationship with Disney's Kyle Massey, who she met on Dancing with the Stars last year."


Stacy McCain gets to the real truth-which is why the investigative site "The Other McCain" is so hugely popular and influential-and blows the lies out of the water in his comments below the photo of the Massey family. 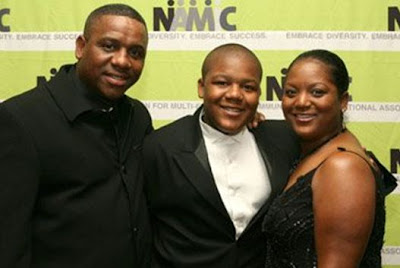 "In a recent interview with a celebrity gossip Web site, Angel Massey described how, during last season’s Dancing With the Stars, her family became friends with Sarah Palin’s family:

“Both of our families gelled during Dancing with the Stars. Sarah would be in the audience cheering for Kyle, and we’d be in the audience rooting for Bristol. We all became close.”
Mama Massey adds, ”The Palins are really funny, nice and genuinely warm to us.”

Isn’t that nice? And wouldn’t you think the rest of the media would be rushing to report this neat human-interest angle about the Palin family?
Except that Angel Massey’s pro-Palin comments were included in her denial of an anti-Palin story the media likes better."
Posted by M. Joseph Sheppard at 12:53:00 AM