If front runner Donald Trump is correct in his assessment on which states he would win in the presidential election it is a game-changer, dramatically so;

"Trump told  Breitbart News that the Rust Belt—places like Pennsylvania, Ohio, Michigan, and others—where blue collar American workers, many of them Ronald Reagan Democrats, are states he will certainly win if he wins the GOP nomination.

“Those are my states,” Trump said."

What such a change in Electoral College wins would mean is that Trump would be elected president without needing to carry both Florida and Virginia. These two states went to Obama twice, albeit closely, and under the usual circumstances the loss of either, especially Florida, means that it is nearly impossible for a Republican to win.

Normally if Florida is lost the GOP supporters can turn off their televisions about 9 p.m. on election night as 29 Electoral College votes are just too many for them to pick up elsewhere-especially  given how tight the electoral map is for the GOP. Even with Florida in the bag, both Virginia and Ohio have to be won to ensure a tight victory, something that hasn't happened since 2004.
But if Trump's assessment is correct, that his appeal to blue collar voters in the "rust belt" is such that he can carry Ohio, Pennsylvania and Michigan he would, presuming he held the "McCain/Romney states, tie with the Democratic nominee at 269/269  (see map 1 below) at which point the election would be thrown into the Republican dominated House of Representatives* who would, presumably, choose Trump (the Senate would choose the Vice-President)

In point of fact winning Ohio/Pennsylvania and Virginia (see Map 2 below) would eliminate the need for the House to act as Trump would have 272 votes-3 more than needed. This would seemingly be an easier road to victory as Romney lost Virginia by only 3.88 points but Michigan by 9.50 points. Trump would also have to win Iowa which has been a blue state more often than red in recent years.

There are some possibly significant implication to follow if polling shows Trump holding substantial leads in these rust belt states. Firstly the "Reagan coalition" would be back in place with the combination of the 'solid South" the Midwest, plus blue collar workers, and would bring to the polls the "Perot voters" in these key states which analysis shows stayed home in 2012.

Secondly it would negate the seeming imperative to have a Hispanic on the ticket to win Florida, thus putting the chances of a Trump Bush or Trump Rubio (or even Martinez or Sandoval) further away than might have been originally considered. That's not to say any of those combination might still happen or be an insurance policy-or even icing on the cake in the Electoral College.

There are of course many reasons to have a prominent Hispanic on the ticket, not least with an eye on future demographics, but also to show that a tough policy on illegals is not aimed at the Hispanic community at large.

On the other hand studies have shown that, apart from Florida and perhaps Colorado, the Electoral College route for the GOP is not, at present, Hispanic depended. Interestingly though, early polls in Hispanic areas have shown Trump to be the preferred choice "because of the prospect of jobs" which is if course a universal message and the key to the rust belt states as well. 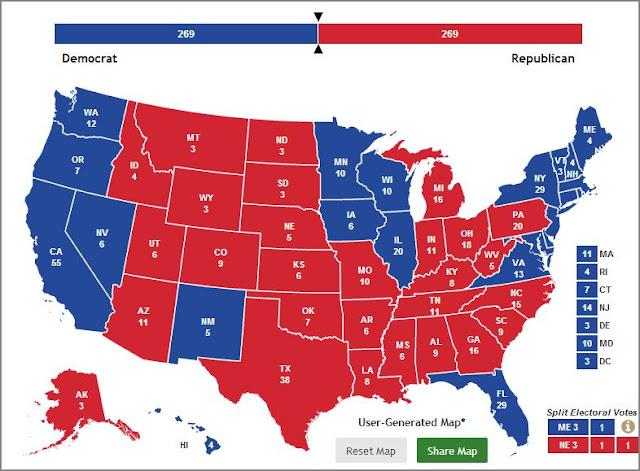 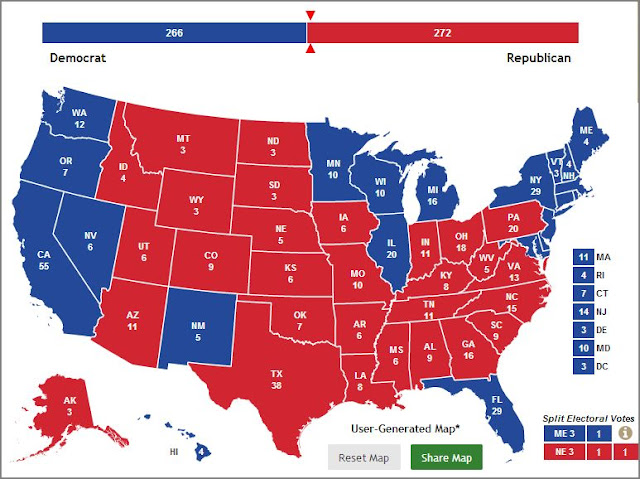 *The constitution is very clear on the matter. Article 12 states, inter- alia:
"The person having the greatest Number of votes for President, shall be the President, if such number be a majority of the whole number of Electors appointed; and if no person have such majority, then from the persons having the highest numbers not exceeding three on the list of those voted for as President, the House of Representatives shall choose immediately, by ballot, the President. But in choosing the President, the votes shall be taken by states, the representation from each state having one vote; a quorum for this purpose shall consist of a member or members from two-thirds of the states, and a majority of all the states shall be necessary to a choice."
Posted by M. Joseph Sheppard at 2:26:00 AM