The Ten Point Case For Sarah Palin As Trump's Vice-President

Since Donald Trump is all but assured of the Republican nomination speculation has, naturally, turned  to considering who his running mate might be. I present below the case for Governor Palin as I see it 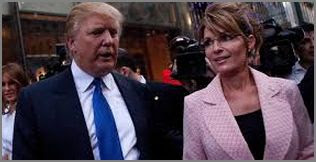 Asked during an interview with Kevin Scholla on talk radio show The Palin Update whether he would consider asking Palin to serve in “some official capacity,” Trump replied enthusiastically.“I’d love that,” he said. “Because she really is somebody who knows what’s happening and she’s a special person, she’s really a special person and I think people know that.”


In the interview, Trump said that both he and Palin had been victims of unfair attacks from the media. Trump said he looks at Palin’s ability to handle such coverage with admiration. “She took so much nonsense, lies and disgusting lies,” Trump said. “She handles it so well.

She’s tough and smart and just a great woman so it’s an honor to be with you today.” “I don’t even think she knows how important she is, okay?” Trump said. “Maybe that’s part of the beauty of Sarah Palin.”


There are a number of takeaway's from that statement which lead to a case for Governor Palin as his running mate; "Trump/Palin 2016."

1. They are obviously compatible which is an important aspect of a viable campaign team. This is not the first time both Trump and Palin  have praised each other-the famous "Pizza Summit" was just one example. Trump recently Tweeted to Palin that he would "love to have another Pizza meeting."

When asked directly about a ticket Trump responded "I don't think she would wish to put herself through that again". That is of course a million miles from "She said she would not etc and leaves the door wide open.

2. Being of the same mind and personally compatible would lead to a smooth running administration. President Wilson hardly spoke to his vice-president Thomas Marshall in just one of a number of instances of poorly compatible executive team having a deleterious effect on an administration.

3. Palin would add to the team her executive experience in government at the level of hands on administration as a governor. This would help blunt the charge that Trump has no political and governing experience.

4. There are some in the base who view Trump as not a genuine Republican, much less a conservative. Palin would guarantee the enthusiasm and turnout of those potential voters and fire up the base exactly as she did for McCain in 2008 when she put him in the lead before the economic crisis made even her herculean  efforts of no avail.

5. Given that Hillary is the Dem's nominee Palin would stop the ridiculous "war on women" meme dead in its tracks. If on the other hand Hillary isn't the nominee, and there are no women on the Dem's ticket, then obviously Palin would provide gender balance to the GOP's advantage.

6. Nobody in political life has been as thoroughly vetted as Palin. There are absolutely no hidden things, real or imaginary, that the left could dig up on her that have not be canvassed in extremis. What this means is that the GOP team could proceed straight into campaigning and delivering their message without the usual distractions that the media digs up.

7. Palin's pro-life bona fides are absolute and indisputable. Her endorsement of Trump would take away any doubts potential pro-life voters might have about a Trump ticket.

8. Palin is a proven campaigner with the ability to draw massive crowds, as opposed to for example Paul Ryan who added little to the Romney ticket. The turnout for her in Florida was massive and in such a key state could be a deciding factor.

9. Palin is "media ready" she is a natural on television and her every appearance would attract substantial viewers making her a key "get' for the media and ensuring a wide audience for the ticket's message.

10. After 2008 Palin is media savvy and could handle anything the interviewers threw at her with aplomb which a novice to the media furnace might not be able to deal with. 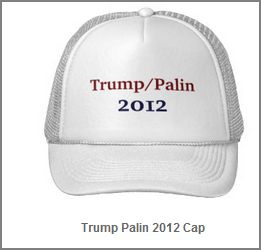 "Trump/Palin" is literally "old hat" and the fact that it was mooted years ago shows that the concept has been taken seriously as something so obviously substantial and advantageous deserves to be.
Whether its time has come remains to be seen, but most certainly it is to be considered seriously as the ten points (there are others of course) indicate.

Palin has also praised Trump in recent weeks. After Trump questioned Senator John McCain’s status as a war hero, Palin said that both men are heroes. “I have the good fortune of knowing both John McCain and Donald Trump well,” Palin told CNN. “Both men have more in common than the today’s media hype would have you believe. Both blazed trails in their careers and love our great nation.”

In 2011, after President Obama released his birth certificate: “Media: Admit it. Trump forced the issue.”
Later that year, after the two shared a pizza: “Every time you go to New York, you’ve got to see Donald Trump. … I approve of his independence.”
In 2014, after a Buzzfeed hit piece on Trump: “This nervous geek isn’t fit to tie the Donald’s wingtips. Don’t ever give him attention again.”
Palin even defended the Donald  after he bashed McCain — the man who first brought her south to the Lower 48.

And of course there is the Palin /Trump interview at OAN which, too date, has over 3 million views which shows the power and interest in Trump and Palin. LINK


Fair use notice: This website contains copyrighted material, the use of which may or may not have been specifically authorized by the copyright owner. Excerpts of such material is made available for educational purposes, and as such this constitutes ‘fair use’ of any such copyrighted material as provided for in section 107 of the US Copyright Act. In accordance with Title 17 U.S.C. Section 107, the material on this website is distributed without profit to those who have expressed a prior interest in receiving the included information for research and educational purposes. Original material published on this website may be excerpted and the excerpt reproduced for the purpose of critical reviews. However, such original material may not be reproduced in full on another website or in any manner without prior approval from this website’s owner. In all cases when material from this website is reproduced in full or in part, the author and website must be credited by name and a hyperlink provided to this website.