Gov.Palin In Gallup's Top 10 Most Admired Women In World For 8th Straight Year 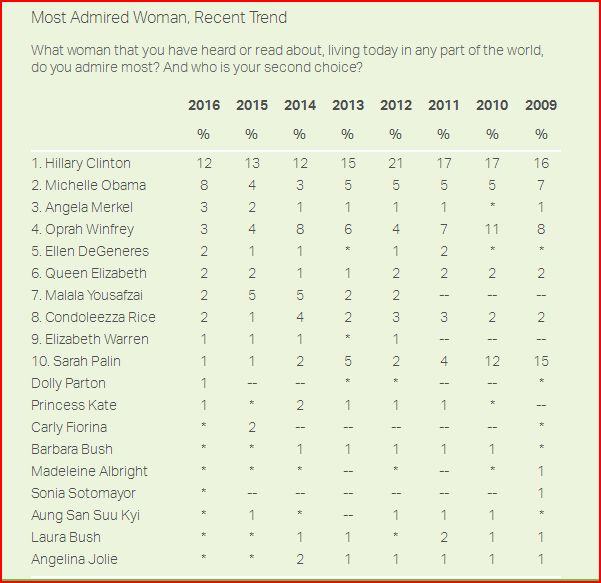 Governor Palin holds no office, has no regular media platform and yet for the eight consecutive year is listed in Gallup's "Most Admired Women In The World" list.

This speaks volumes about the high regard she is held in for her honesty  ethics and dedication to the truth no matter the personal cost in possible political advancement.

"Americans named Hillary Clinton the Most Admired Woman for the 15th consecutive year and 21st time overall. Since her initial win in 1993 as first lady, Clinton has topped the list every year but 1995 and 1996 (when she finished behind Mother Teresa) and 2001 (behind Laura Bush). Eleanor Roosevelt has the second-most No. 1 finishes among women, at 13.

First lady Michelle Obama finished second on the Most Admired Woman list this year, tied with 2012 as her best finish. The remainder of the top 10 most admired women include German Chancellor Angela Merkel, former and current talk-show hosts Oprah Winfrey and Ellen DeGeneres, Queen Elizabeth of England, human rights activist Malala Yousafzai, former Secretary of State Condoleezza Rice, Massachusetts Sen. Elizabeth Warren, and former Alaska Gov. Sarah Palin."
All of this year's leading women have finished in the top 10 multiple times before, led by Queen Elizabeth's record 48. Winfrey's 29th top 10 finish this year moved her ahead of Jacqueline Kennedy for the third-most-frequent appearances behind Queen Elizabeth and Margaret Thatcher (34). Clinton's 25 top 10 finishes rank fifth-best all-time. Rice has finished in the top 10 a total of 16 times, while Obama and Palin each made their ninth appearances in the top 10 this year.
Clinton was the top choice among Democrats, with 26% naming her, followed by Michelle Obama at 18%. Republicans did not have a consensus choice -- 5% named Queen Elizabeth, 4% each named Clinton and DeGeneres, and 3% each named Rice and Palin.
Rice. Sarah Palin came closest to beating Clinton in 2009, but Clinton narrowly kept her title in the bag."