Would President Obama have Won A "Third Term"? Absolutely Not

"Obama Says He Would Have Defeated Trump for a Third Term"

From The New York Times;

President Obama expressed confidence that, if he had run for a third term, he would have defeated Donald J. Trump, according to an interview released Monday with David Axelrod, his friend and former adviser.
“I’m confident that if I — if I had run again and articulated it, I think I could’ve mobilized a majority of the American people to rally behind it,” Mr. Obama said on Mr. Axelrod’s podcast, “The Axe Files,” referring to his message of inclusion and helping middle-class Americans.
“I know that in conversations that I’ve had with people around the country, even some people who disagreed with me, they would say the vision, the direction that you point towards is the right one,” he said.
Several hours after the interview was posted, Mr. Trump responded on Twitter. “President Obama said that he thinks he would have won against me,” Mr. Trump said. “He should say that but I say NO WAY! — jobs leaving, ISIS, OCare, etc.”

If in President Obama's fantasy the 22nd amendment to the Constitution had not been ratified in 1951 and he could have run for a third term This is what an Obama Vs Trump Electoral College map would have looked like; 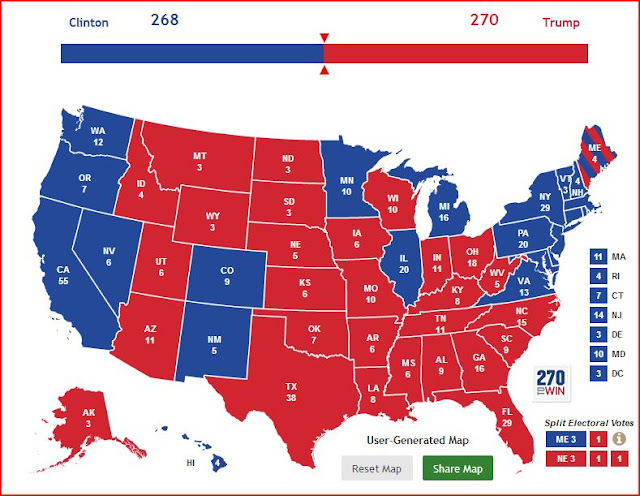 Trump won Michigan by 0.22 and 10,077 votes. It is more than reasonable to surmise that President Obama would have easily gained more than eleven thousand votes over Clinton's total.

The simple fact is that Michiganders just didn't like Hillary as was shown in the Democratic primary where she lose an "unloseable" battle with Bernie Sanders in the state.

Although the Democratic vote was massive in Philadelphia and probably maxed out, it is reasonable to have expected that Obama would have picked up enough votes in the suburbs and even in the rural areas to have taken what is normally a safe state for the Dem's.

But Wisconsin was such a massive win for Trump that it is hard to envisage even Obama could have recovered the situation.

The simple, unmistakable facts are that Wisconsin wanted change.

As obviously disenchanted with both candidates as the turnout was lower than 2012, the concept that the state would have voted for the person, Obama, whose administration was clearly seen as being responsible for their disenchantment with the status quo beggars belief.

As third term candidate President Obama would not even have had Clinton's (somewhat faded) "fresh face" and his campaign would have been entirely one of "more of the same' when the voters, at least in the rust belt states wanted exactly the opposite.

For President Obama running on his economic record to have won
Pennsylvania, Michigan and Wisconsin, especially when a "third term" i.e. a governing party winning three presidential  elections in a row is extremely rare, is a fantasy and, frankly, an insult to Hillary Clinton which speaks volumes about the state of the Democratic Party and President Obama.