This is, I believe, the first and only analysis of the aggregate Dem bias in polling which makes up the RCP and 538. com Trump Approval ratings. RCP doesn't include many of these not so common polls but their aggregate is also distorted by lumping all polls they carry whether Registered/Likely/All Voters polling. Likely voters polls have a significantly higher level of Trump approval than All Voters polls. There is usually a 1-2 point higher approval for Trump at RCP, currently 43% than 538 which gives a choice of viewing an AV poll aggregate or an RV/LV aggregate, currently 42.4%.

The Dem aggregate bias from the 29 polls which detail their D/R/I split is D+6.20%. Rasmussen uses D+4 as does Selzer. D+4 is, according to exhaustive research as presented by PPD's Richard Baris a realistic baseline given the California/NY/IL popular vote Dem advantage. The 2016 election actual result
was D+2.

A partisan advantage is not the only method of bias/distortion. Females may be over-represented, rural voters may be under-represented which was the polls failing in 2016, education and income levels may be wrongly calculated and of course turnout modeling as Nguyen rightly states will have an effect. For a comprehensive review of the electorate see the Pew Analysis. That said the over-representation of Dems in 19 of 29 polls is clearly the significant factor in Trump's polling.

A further 11 polls which are included in the RCP/538 aggregates do not provide their demographics, it could well be surmised that all of them are above the D+4 baseline especially the likes of the ABC/Washington Post poll and the true aggregate is over D+7. All these polls, their D biases and methodology,can be found at the RCP/538 websites linked above. 538 arbitrarily "adjusts" Rasmussen down 4 points. It is a matter of conjecture, but if all these polls were D+4 and Likely Voters, Trump's approval would be at least 50%

Nota Bene: The +7.65/6.20 figures were correct when this article was first written as the pollsters change their demographics it will vary but will be circa that figure-higher or lower as time goes on; 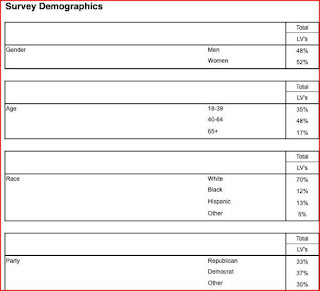 AMERICAN RESEARCH GROUP (ARG) "Mother Jones observed in 2007 that ARG "may not be the bellwether for accurate polling."[5] The New Republic found in 2008 that "ARG is a black sheep of the polling world; I repeatedly heard it singled out for scorn by other pollsters."

Sample Size: 1,100 completed interviews among a random sample of all adults age 18 and older living in households in the continental United States (see methodology for details). There were 259 Republicans, 355 Democrats, 377 independents, and 109 non-voters in the sample.
Margin of Error: � 3 percentage points, 95% of the time, on questions where opinion is evenly

CLIMATE NEXUS RV  D+7.5
Sample Population: 1917 registered voters in the United States. Sample Selection: Scientific online poll - stratified sample of panel respondents. Weighting Parameters: The sample was weighted based on the U.S. Census Bureau’s Voting and Registration Supplement to the Current Population Survey for registered voters in the United States based on age, gender, race, educational attainment, census region, and Hispanic ethnicity. This topline provides weighted percentages, as well as the unweighted N-size for the total sample. Due to the effects of weighting and rounding, figures may or may not add up to 100%. The standard deviation of the weights was: 0.2242216. The maximum weight was: 1.9601923. The minimum weight was: 0.3773268. 95% of the weights were between 0.4793321, 1.4957711. Margin of Error: The 95% credibility interval for this survey is +/- 2.3%, which includes the square root of the design effect (DEFT): 1.0248166. 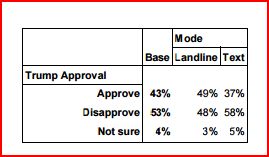 HARVARD/HARRIS RV D+5
Democrat 37% Republican 32%  Independent 28% Other 3%
Monthly Harvard-Harris Poll: May 2020 This survey was conducted online within the United States from May 13-14, 2020 among 1,854 registered voters by The Harris Poll. The results reflect a nationally representative sample. Results were weighted for age within gender, region, race/ethnicity, marital status, household size, income, employment, political party, political ideology, and education where necessary to align them with their actual proportions in the population. Propensity score weighting was also used to adjust for respondents’ propensity to be online.

ABC/WASHINGTON POST RV NO DRI
Washington Post-ABC News poll was conducted by telephone among a random national sample of 1,001 adults, with 75% reached on cell phones and 25% on landlines. Results have an error margin of +/- 3.5 percentage points for the full sample including design effects due to weighting. *=0.5%

TARGET SMART/DYNATA RV D+7
Democrat and Ind. Lean Dem 47 - Pure Independent 10 - Republican and Ind. Lean Republican 40
TargetSmart designed this multi-mode survey and administered it in partnership with industry-leading data collection vendor Dynata. Six hundred (556 weighted) respondents were interviewed over the telephone by professional agents (79% on cell phones, 21% on landlines), and 600 (644 weighted) respondents were interviewed online, reached via the Dynata online panel. Telephone interviews were drawn from a random sample of registered voters across the United States, sampled from the TargetSmart voter file. Online interviews from the Dynata online panel were also all matched back to the TargetSmart voter file. In total, the survey reached 1,200 respondents who indicated they are registered to vote in the United States. The survey was conducted from May 21- 27, 2020. Quotas were designed to reflect the demographic and geographic distribution of registered voters in the United States. The data were weighted by gender, age, modeled race, modeled partisanship, modeled education, modeled vote propensity, population density (at the census bloc level), and geography (at the state level) to ensure an accurate reflection of the population.

CNN/SRS D+7
A total of 1,259 adults, including an oversample of 250 black, non-Hispanic adults, were interviewed by telephone nationwide by live interviewers calling both landline and cell phones. Oversampled black, non-Hispanic respondents have been weighted to represent their proper share of the adult population. Interviews were conducted in English and Spanish. Among the entire sample, 32% described themselves as Democrats, 25% described themselves as Republicans, and 44% described themselves as independents or members of another party.The study was conducted for CNN via telephone by SSRS, an independent research company. Interviews were conducted from June 2-5, 2020 among a sample of 1,259 respondents, including an oversample of 250 black, nonHispanic respondents. The landline total respondents were 448 and there were 811 cell phone respondents. The margin of sampling error for total respondents is +/- 3.4 at the 95% confidence level. The design effect is 1.47.

IBD/TIPP RV Poll No DRI
IBD/TIPP Poll reflects an online survey of 1,233 adults from May 31 to June 3. The Trump-Biden 2020 presidential election poll reflects a subset of 964 registered voters.

Zogby Poll LV Even 36/36/I 28
Zogby Analytics conducted an online survey of 1007 likely voters in the US.
Using internal and trusted interactive partner resources, thousands of adults were randomly invited to participate in this interactive survey. Each invitation is password coded and secure so that one respondent can only access the survey one time.
Using information based on census data, voter registration figures, CIA fact books and exit polls, we use complex weighting techniques to best represent the demographics of the population being surveyed. Weighted variables may include age, race, gender, region, party, education, and religion. The party breakdown for this survey is as follows: 36% Democrat, 36% Republican and 28% Independent/unaffiliated.

EMERSON POLLING RV NO DRI
National Emerson College/Nexstar Media poll was conducted June 2-3, 2020. The sample consisted of registered Democratic, Republican, and Independent voters, n=1431, with a Credibility Interval (CI) similar to a poll’s margin of error (MOE) of +/- 2.5 percentage points. The data sets were weighted by age, ethnicity, education, and party based on 2016 election turnout.


MORNING CONSULT (POLITICO) RV D+5
Methodology: This poll was conducted between June 12-June 14, 2020 among a national sample of 1987 Registered Voters. The interviews were conducted online and the data were weighted to approximate a target sample of Registered Voters based on gender, educational attainment, age, race, race, and region. Results from the full survey have a margin of error of plus or minus 2 percentage points.

RMG (Scott Rasmussen) RV DRI not supplied
The survey of 1,200 Registered Voters was conducted by Scott Rasmussen using a mixed mode approach from June 11-13, 2020. Field work for the survey was conducted by RMG Research, Inc. Most respondents were contacted online or via text while 306 were contacted using automated phone polling techniques. Certain quotas were applied, and the overall sample was lightly weighted by geography, gender, age, race, education, and political party to reasonably reflect the nation’s population of Registered Voters. Other variables were reviewed to ensure that the final sample is representative of that population.

Abacus Data RV No DRI
The survey was conducted with 1,500 American adults from June 11 to 13, 2020. A random sample of panelists was invited to complete the survey from a set of partner panels based on the Lucid exchange platform. These partners are typically double opt-in survey panels, blended to manage out potential skews in the data from a single source.
The margin of error for a comparable probability-based random sample of the same size is +/- 2.5%, 19 times out of 20.
The data were weighted according to census data to ensure that the sample matched the United States’ population according to age, gender, race, educational attainment, and region. Totals may not add up to 100 due to rounding.

REDFIELD AND WINTON RV NO DRI

HarrisX/The Hill RV D+5
The Hill-HarrisX poll was conducted online among 1,912 registered voters between June 8 and 10. It has a margin of error of plus or minus 2.24 percentage points.

Hey, great post. I would also add that if one digs into the "I" component, it is actually tilted left, at least it is for those polls that also break down 2016 vote (in other words, I have a higher than normal Clinton 2016 vote level, tilting the entire poll to D even if headline D+ number is within reason). Some polls also have elevated numbers of people who didn't vote in 2016, beyond what one would expect from older voters dying and younger people aging into voting eligibility.

That's correct as I pointed out there are a number of factors that can add to a D bias.Look at the PPP methodology for example. It's a Dem biased outfit but hasD+2 report basis but their chart shows Trump Approval landlines 49% "text approval 37%" which arrives at a 43% approval overall which is just silly