OK PPP is a "D" orientated poll but still there has to be a little teeny shred of credibility to be in the public forum-apparently not.

Better still here are their results by race; 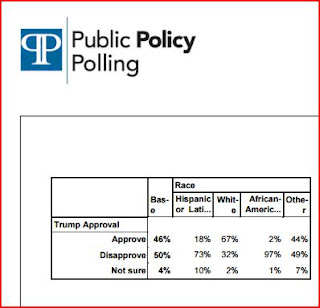 Here's what Nate Silver said about PPP
"A few pollsters are shameless about their herding. One of them is Public Policy Polling (PPP), a polling firm that conducts automated polls for both public consumption and for liberal and Democratic clients.
Take a look at this exchange, for example, between The New York Times’ Nate Cohn13 and PPP’s Tom Jensen. Cohn discovered that in 2012, the racial composition of PPP’s polls was correlated in an unusual way with President Obama’s performance among white voters in their surveys.
If Obama was performing especially poorly among whites in one PPP poll, it tended to have a higher share of nonwhite voters, which boosted Obama’s result. And if Obama was doing relatively well among whites, PPP projected less nonwhite turnout, keeping his lead in check. As a result, PPP’s polls tended to show an unusually steady race between Obama and Mitt Romney.
I’m picking on PPP for a reason: They’re the biggest herders in the business. Here’s the chart I showed you before, but with only PPP’s polls highlighted. On average, in states with at least three other recent polls, their polls deviated from the polling average by only 1.6 percentage points. The evidence for herding is extremely clear visually and statistically
The first polls conducted of Kansas after the Democratic candidate dropped out of the race were from Public Policy Polling and showed Orman ahead by 10 points. PPP’s polls can be highly inaccurate when they don’t have other polls to herd toward. In this case, however, other pollsters may have herded toward PPP, producing an incorrect consensus about the race.17