SAN JOSE;THE VIOLENCE CONTINUES. HILLARY CLINTON AND SANDERS BOTH ARE TOTALLY SILENT. THEIR SILENCE CONDONES AND ENABLE THESE LEFTIST THUGS.
A DEMOCRATIC VICTORY IN NOVEMBER LEGITIMIZES THE RULE BY THE MOB AND AMERICA WILL NEVER BE TRULY FREE AGAIN.
"Hillary Clinton campaign chair John Podesta condemned reports of violence on Twitter, writing, "Violence against supporters of any candidate has no place in this election."
But nothing from enabler Hillary
**************************************************
"Mob mentality takes over"

UPDATE 1;
The radicals continue on their way to assisting the election of Donald Trump, this time in New Mexico 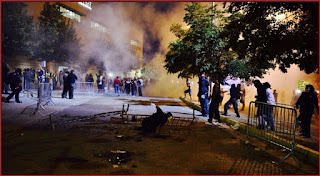 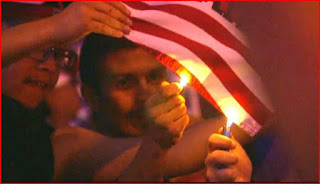 Surely any peaceful American of whatever political persuasion can only view this mindless savagery with anything but nothing but contempt. Even at the far left "Gawker" site some  get it;
"This type of behavior is playing right into Trump’s hands. It is shameful. His ideology is based in violence and this allows him to blame people opposed to him as the initiators of violence which gives credence to the violence his supporters propagate.
SAD!"
But only some of course;
"I disagree. I would be worried if this wasn’t the reaction to Trump’s brand of demagoguery. These are good protests and we need to make sure they continue."Nah, only good fascist is a dead fascist." "Who’s to say he didn’t plant them there?"

And at far left "Daily Kos" they worry too that these punks will lose the election for Hillary;
"This Is How Elections Are Lost"
Don’t attack police. Don’t destroy property. Don’t make John and Jane Q Public more afraid of you than they are of Trump.  As soon as you do, they will vote for Trump,

"The Last Refuge" has extensive coverage;

***********************************************************
The radical left protest mobs who achieved striking success in ensuring two of Trumps biggest and most important landslide wins, Illinois and Indiana, will double their efforts during the presidential campaign to ensure his landslide against Hillary.
In the March 15th Illinois primary Trump won by
8 points over Cruz at a time when the nomination was still up for grabs. Even more importantly Trump's delegate swag was a massive 54 to Cruz's 9.
The primary was won in the voting booth, but what took place on the streets a few days prior  (March 12th) signaled to Republicans not only who they were voting for but who they were voting to
save America from; <video
"Trump supporters, protesters clash after Chicago rally postponed"
Donald Trump's campaign on Friday postponed a rally in Chicago amid fights between supporters and demonstrators, protests in the streets and concerns that the environment at the event was no longer safe.
The announcement, which came amid large protests both inside and outside the event at the University of Illinois at Chicago, follows heightened concerns about violence in general at the GOP front-runner's rallies. Illinois holds its Republican primary on Tuesday."
By everyone's agreement the Indiana primary on May 3rd with its winner take all haul of 54 delegates was the make or break event for the Cruz campaign. Win it and he stayed alive with a glimmer of hope right through to California and perhaps a contested convention, lose and it would be all over.
To ensure a Trump win, because they are so utterly stupid, the protesters, this time in California, left nothing to chance and hit the streets multiple times;
April 29th;Protests delay but don’t derail Trump in California
April 29th: Violence Follows California 20 Arrested
April 30th; Protesters and Police Face Off Outside Trump Speech in California
The face of a Trump supporter sends a signal to Indiana voters. 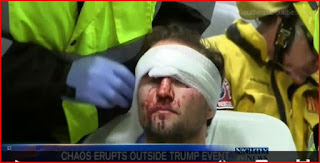 And the result? the protesters succeed beyond their wildest dreams handing Trump a landslide in Indiana, a 17 point win and all 57 delegates, knocking Cruz and Kasich out of the race and making Trump the nominee.
Can these idiots and keep up their efforts right through to November?
Can they ensure millions of ordinary American are utterly revolted at the prospect of the campaign, Hillary's, that represents these rioters holding power over them?
Of course they can because they are idiots.


Perhaps they can dedicate their work in memory of the Democratic convention riots of 1968 Can they get to these numbers-hopefully so. 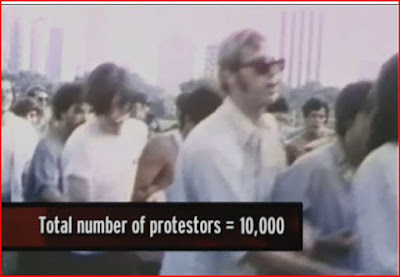