In the fantasy world "Reuters IPSOS Biden Initial Approval 55% In Dem +14 "Poll" Of All Adults. They Are Incorrigible!

In the real world however; 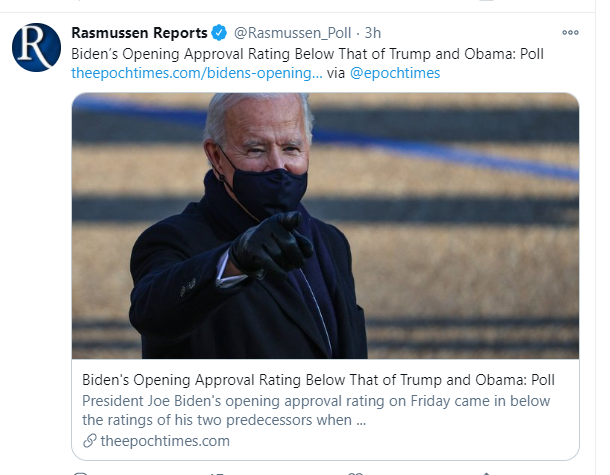 Rasmussen the highly respected and one of the most accurate of pollsters in a business that has come under massive criticism for constant failures is the first to release its presidential tracking poll approval for the new Biden administration.

And it's not good news for the new president. Those new to the office usually have a "honeymoon period" at the start and it is most unusual to begin under 50%. President Biden's two latest predecessors were comfortably above that figure.

Former President Donald Trump's first approval poll in January 2017 was 56% 8 points above President Biden's start and President Obama began with a massive 67% in the heady days of his first term a whopping 19 points above Biden's.

As is most often the case, President's Eisenhower and Kennedy being rare exceptions, presidential approval rises and falls with both Trump and Obama falling below 50% at times-President Trump finished at 51% in his final poll.

But to start at 48% shows a deeply divided country and a new president who has not captured the admiration of the public as yet and shows the possibility of a strongly unpopular term with the usual midterm calamity that befalls presidents. Much is riding on President Biden's handling of the vaccine roll out which he has promised "100 million in the first 100 days" if that falls badly short of the target his approval may approach G.W. Bush's final number which were below 30%