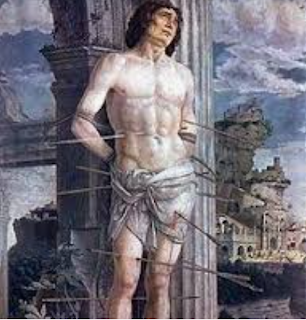 Like St. Sebastian martyred for his faith, pierced by a multitude of arrows of arrows from so many haters so President Trump ends his presidency as it began as a similar target from a multitude of enemies of the people.

Put into office as the representative of the common man to shake up a corrupt system Trump was attacked with lies and venomous hate from the establishment and their lackeys from day one.

The entire mainstream media pored forth and endless stream of lies and distortions in an effort to turn the public against him and his administration.

A vengeful and corrupt political opposition made every effort to bring him down and with all that they failed until an totally unforeseen happenstance of a foreign created virus turned what was clearly an easy road to reelection in February 2020 into a daily battle for political survival.

And even still Trump was defeated by less than 50,000 votes across three states and garnered over 74 million votes.

The wheel of history turns slowly but turn it does. The media, Democrats and their RINO allies and the oligarchic giants who control social platforms have overplayed their hands and will suffer the consequences eventually in a manner as yet unclear but retribution will come.