First there's this loser which typifies the arrogant media who just won't let go of their preconceptions right till the last moment; THE WEEK
You can tweet him at @pegobry

OPINION
Iowa is the beginning of the end for Donald Trump

But the ones who stand about above all are the "analysts" like Philip Bump, Dana Milbank, of The 'Washington Post' and Nate Silver and Harry Enten of  'FiveThirtyEight' and Charlie Cook ('Cook Report')
This crew have purveyed charts and graphs and lines and squiggles circles and squares which have one message in common. "Trump can't win."

They've advised Trump has a 1% chance, We've seen this scenario before with "Cain, Gingrich who briefly led then collapsed in the polls" "Trump's ceiling is 10% or 15% or 20% or 25% or 30%" Trump has "stalled, is in decline has hit his ceiling. lost momentum "the trend is your friend."

So many memories! The meme's carried on when even Blind Bob could see that Trump was ascending. "Carson will pass him, Cruz will pass him, When the field thins Trump will go down." "Trump crowds are only attending for the entertainment (people standing freezing cold for hours for entertainment is a novel concept). "Trump supporters haven't' caucused before and are not likely to show up"
My favorite, well one of them there are so many, was "Trump won't even win one state."

What is the most delightful thing to reflect on is that all these pundits have been beaten by a housewife from rural Alaska-it is really amusing, and by a sharp New York City tycoon who has run rings around them and their whole clique and cabal!

If these gentlemen were actually productively employed,say they worked for Trump, and produced failure after failure the message to them would be clear "Your fired." Unfortunately they will blithely carry on tossing red meat to their clearly blank minded audience as if nothing they said previously ever took place. Oh, except for Milbank who ever so cleverly announced he would eat his column if Trump were the nominee. I hope he is marinating it in Tabasco-enjoy!

Charles C.W. Cooke continues a long unhappy line of Englishmen who deep down don't understand the American political system and psyche. His elitism to Trump and Palin knows no bounds and perhaps he might think of taking a sober look at his prejudices-but alas in fear it is a quixotic thought. On the other hand hopefully he will follow his predecessor back to Blighty.


Donald Trump is Setting Up Fox News to be the Scapegoat for an ‘Unfair’ Iowa Loss We are about to witness bankruptcy #5 for a Trump-related entity. This time, he’s filing a strategic bankruptcy on behalf of his campaign to establish protection against the blow back from his upcoming loss in Iowa

kathleenparker @kathleenparker
Trump is listening hard and trying figure out what this strange creature from Alaska is talking about. Trying to gauge damage. Oh dear."

After Governor Palin addressed CPAC a whole rat pack of elitist snobs led by Politico's Roger Simon not only wrote her obituary but they planted her coffin 20 feet down.

Simon declared ex-cathedra and that was supposed to be that. The only possible reduction in Simon's humiliation by a housewife from rural Alaska is that he is not alone a whole stable of Beltway elitists have come tumbling down with him as they cascade into the dustbin of history.

Politico under Simon's control the "brightest and the best" scenario, has run an endless campaign of denigration against Palin. How could this backwater woman possibly compete against the Establishment elite?

Not only has Simon and his ilk utterly misjudged Donald Trump, another humiliation for them, but a simple reading of Palin's history of being underestimated and then pulling off a "surprise" win would have been obvious. But so enveloped in their smug cocoons the blindingly obvious escaped them.

Palin has continued to populate Congress with candidates she endorses, 21 of 23 such were elected in the 2014 mid-terms including some who owe their primary campaign wins to her. She was the driving force behind the Tea Party triumphs of 2012 and has, obviously, been working with Donald Trump for some time to assist with his presidential run. 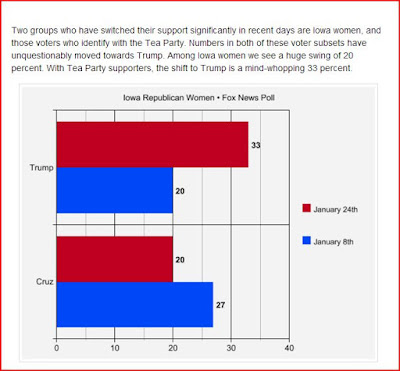 Only a fool would deny that Palin's endorsement of Trump in Iowa had an immediate effect on his come from behind poll numbers. The movement of women and Tea Party supporters in Iowa was dramatic and outlined even by the leftist media

Nicolle Wallace in The New York Times summed it up in one sentence "(Donald Trump)  Should he come out on top in Iowa, he has her to thank.

If Palin had endorsed Ted Cruz, whose career she made possible in the first place. he would have won Iowa and would be the nominee. She didn't, she endorsed Trump and he will now be the nominee and very possibly president. Simon's screed and pompous dismissal is the smallest footnote in history. Palin's role in the elections of 2012/2104/2016 are for the history books and 'serious journalists in which which Roger Simon is not included.

Here's proof from, of all people, Morning Joe; 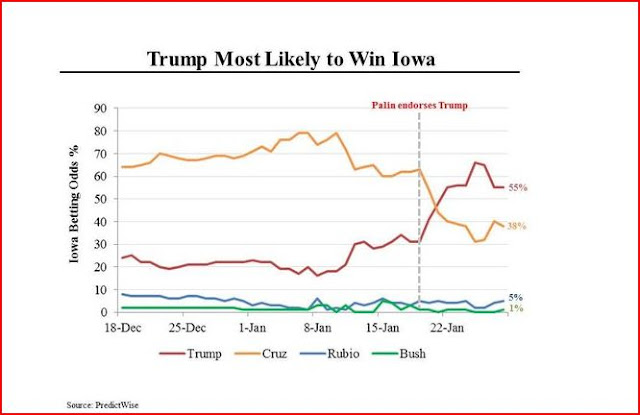 Fair use notice: This website contains copyrighted material, the use of which may or may not have been specifically authorized by the copyright owner. Excerpts of such material is made available for educational purposes, and as such this constitutes ‘fair use’ of any such copyrighted material as provided for in section 107 of the US Copyright Act. In accordance with Title 17 U.S.C. Section 107, the material on this website is distributed without profit to those who have expressed a prior interest in receiving the included information for research and educational purposes. Original material published on this website may be excerpted and the excerpt reproduced for the purpose of critical reviews. However, such original material may not be reproduced in full on another website or in any manner without prior approval from this website’s owner. In all cases when material from this website is reproduced in full or in part, the author and website must be credited by name and a hyperlink provided to this website