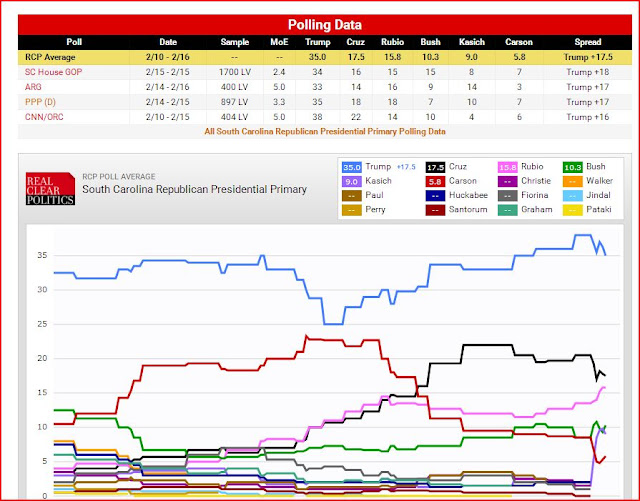 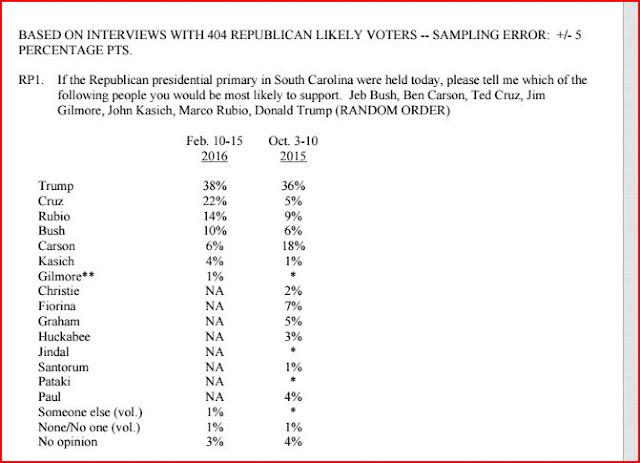 Washington (CNN)Donald Trump holds a broad 16-point lead among those likely to vote in South Carolina's Republican primary this Saturday, according to a new CNN/ORC Poll. Meanwhile, Hillary Clinton tops Bernie Sanders by 18 points in the state's Democratic primary, which will be held a week later.
In the Republican race, Trump, at 38%, tops Texas Sen. Ted Cruz, who holds second place with 22%. Behind those two, Florida Sen. Marco Rubio garners 14% support, former Florida Gov. Jeb Bush is at 10%, retired neurosurgeon Ben Carson has 6% and Ohio Gov. John Kasich is at 4%.
Trump's lead is bolstered by widespread perceptions of him as the candidate best able to handle the economy, immigration and ISIS, and further, that he has the best chance to win in November and would be most likely to change the way things work in Washington.
READ THE POLL RESULTS 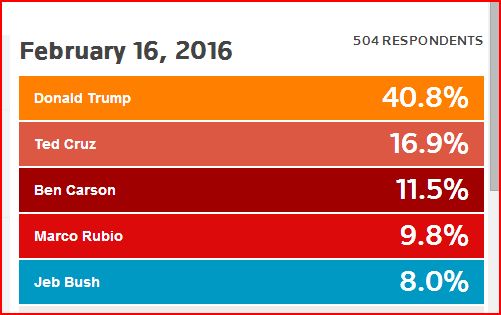 My Blog "M.Joseph Sheppard's A Point Of View"is a conservative orientated site which, along with my Palin specific site, has had over 1,250,000 views. It is a growing force for Trump/Palin and general news analysis and original articles. I have been writing since 2008 and have built up a substantial following including over 1,600 (genuine) Twitter followers who readily interact. Bio; "Center-right,slightly libertarian,recovered liberal, Author.'American Thinker' Writer 'Newsmax: One of 5 LeadingPundits"  https://twitter.com/MJosephSheppard.I have been published at American Thinker, American Journal and numerous conservative sites such as Conservative Treehouse and Bob Belvedere's "The Camp of the Saints." I am linked at Robert Stacy McCain's site "The Other McCain"and "Legal Insurrection." There is a wealth of past articles from me which a Google search will provide.The media, and especially the blogosphere, is dominated by "progressive" leftist sites and there is a pressing need for strong, rational and in-depth conservative writing to counter this.

With perhaps the most important election in decades coming up I would like to add my voice to this need. But it needs to have a professional presentation to effectively counter the sites backed by big corporates and donors like Soros.I wish to have my site professionally made over (to become a web site) and estimate it would take $5000 (any support small or large would assist) to promote it and make it competitive with the likes of Salon/Daily Beast etc. Please review my writings and Tweets and if it meets your standards your assistance would be appreciated. If this is successful I will dedicate myself to tirelessly support the populist, pro-life,Christian values. conservative cause as exemplified by Donald Trump, Governor Palin and the basic thrust of the Tea Party.Since we are at a crucial stage of the election period I would wish to commence this site transition within a month. If you would wish to support the concept of a hard hitting site that stands up for your values here is the support link.
gofundme.com/cmh2jmwc
Thank You
M.Joseph Sheppard
Posted by M. Joseph Sheppard at 1:19:00 PM