Rubio's Strange History Of Cut And Run Under Pressure-Commander In Chief?

Update; Cutting and running from CPAC now?
Via Daily Caller

he organizers of the Conservative Political Action Conference, or CPAC, are attempting to shame Republican presidential candidate Marco Rubio ﻿
79%
, accusing him of “a rookie mistake” and suggesting the Florida senator won’t make this year’s event.

But a Rubio campaign aide, responding to the organizers statement, suggested to The Daily Caller that it’s still possible the senator will attend the gathering, saying: “Our March schedule is still TBD.”
The American Conservative Union, which hosts CPAC, released a statement saying “the Rubio campaign informed ACU’s chairman that their candidate is unwilling to make time to meet with activists and answer their questions at CPAC 2016.” ACU’s response was firstreported by Breitbart News.
“Sen. Rubio cannot have it both ways: he cannot hope to be the inspirational leader of conservatives and at the same time hide at the very moments when activists who compose the heart and soul of the movement assemble and organize,” the organization said in its statement. “For 43 years CPAC has been that critical moment, and in this year’s conference will be the biggest yet.”
***************************************************PREVIOUS UPDATE;It gets stranger 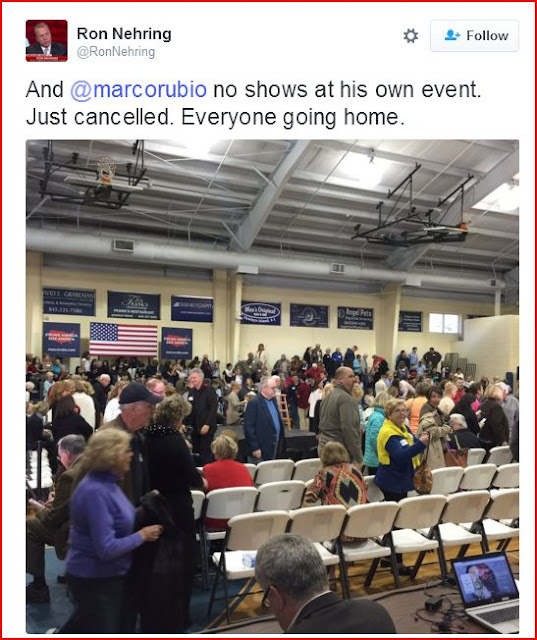 A pattern seems to be is emerging with Senator Rubio where he wilts under pressure and cuts and runs for expediency under pressure. If pressure via the inability to face up to either a demanding or packed against him audience is a basic part of his temperament, then that fact would seem to preclude his ability to be president.

Nobody should be in the position of being Commander in Chief of the armed services, asking for men to go into battle and to face much sterner situations than a hostile political audience, if they themselves are subject to wilting under much less trying circumstances.

It is unimaginable that John F.Kennedy, George G.W.Bush and even Richard Nixon, men tested in battle, would have wilted under pressure like Senator Rubio did when Governor Christie ran him into the ground (as he basically admitted) on the debate stage.

Again, Rubio's apparent wilting, almost literally, under pressure surfaced in the now notorious "water bottle" incident during his State of The Union reply where he was thrust in to the national spotlight for the first time.

"Donald Trump focused his trademark social media fury on Marco Rubio on Monday night, launching a volley of critical tweets at the Florida senator on his immigration record as well as a few insults, saying he "chokes" under pressure.
"Marco Rubio is a total lightweight who I wouldn't hire to run one of my smaller companies -- a highly overrated politician!" Trump tweeted.Trump followed that tweet with criticism of how Rubio delivered the Republican response to Obama's State of the Union address in 2013.
"Marco Rubio couldn't even respond properly to President Obama's State of the Union Speech without pouring sweat & chugging water. He choked!""Marco Rubio is totally weak on illegal immigration & in favor of easy amnesty. A lightweight choker -- bad for USA!"
"Trump say Rubio sweats to much to negotiate with Putin;He looked like he just came out of a swimming pool"

And now we have the truly bizarre circumstance where Rubio cancelled a major meeting with a few minutes notice From Breitbart;

79%
canceled his scheduled appearance at the Conservative Review Conference in South Carolina five minutes before he was slated to go on stage.

79%
canceled his scheduled appearance at the Conservative Review Conference in South Carolina five minutes before he was slated to go on stage.

Conservative Rep. Louie Gohmert (R-TX)
96%
harshly criticized Rubio on his amnesty positions right before the Florida senator was supposed to go on stage.

“Marco Rubio will you raise your hand?” conference moderator Mark Levin said on stage at the conference after it became apparent that Rubio was not going to appear on stage. “Where is he?”
The "explanation" from Rubio's team was that he was "running late. Even if that were the case, which seems suspect, it is not a good look for a prospective president if he can't organize his schedule to make such a major event on time. Of course the Cruz (and Bush) people went to town and who is to say they are not right as regards Rubio under pressure?
Rubio likely would not have been well-received at the convention, according to Breitbart reporter Jordan Schactel, who is on the ground at the conference. Ted Cruz, Ben Carson, and Donald Trump supporters were there in droves, but there was little discernible enthusiasm for Rubio. 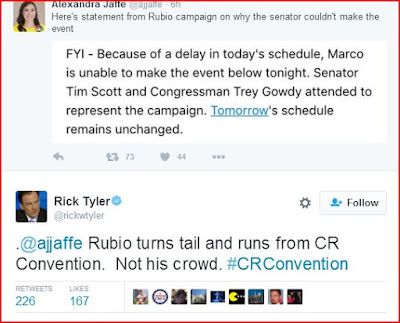 Rubio, Tim Scott, and pro-Rubio South Carolina governor Nikki Haley did have time for a photo-friendly trip to the Beacon Drive-In in Spartanburg, S.C. Thursday afternoon before the conference.
The campaign manager of former Florida Gov. Jeb Bush is piling on, saying that Rubio’s decision to cut and run is proof he’s incapable of serving as a commander in chief"

Read the full article at this link

Clearly there is a major pattern developing of wilting under pressure and cutting and running which exposes Rubio's youth and inexperience and what appears to be a major personality flaw.

Research has turned up this earlier example of cutting and running for expediency which taken with the subsequent chain of events seems to make a clear case for Trump's observations to be correct. On the positive side the exposure of Rubio's failing should ensure he is not in a position of power and responsibility which of course the senate is not) for at least the coming presidential election.

"Amid growing criticism of his poor attendance record, Sen. Marco Rubio on Monday scrapped an evening fundraiser in the Florida Keys so he could attend a closed-door Capitol Hill briefing on North Korea’s latest belligerence.
Monday’s about-face comes just a month before Iowa and New Hampshire kick-off the GOP’s nominating calendar. Although it is not that important on its own, the change will be another reminder of critics’ argument that he’s skipping out on his taxpayer-funded day job for his own ambition.
For Rubio’s rivals, it’s not just that he has the worst attendance record in the Senate, which he did in 2015. Instead, it’s part of a broader argument that Rubio is a lightweight who cares more about his personal ambition than taking care of his constituents. "
Read the full  article AT LINK

Support the growth of this site so a strong conservative Trump/Palin voice can counter the liberal media establishment
See the project information at;
gofundme.com/cmh2jmwc

Fair use notice: This website contains copyrighted material, the use of which may or may not have been specifically authorized by the copyright owner. Excerpts of such material is made available for educational purposes, and as such this constitutes ‘fair use’ of any such copyrighted material as provided for in section 107 of the US Copyright Act. In accordance with Title 17 U.S.C. Section 107, the material on this website is distributed without profit to those who have expressed a prior interest in receiving the included information for research and educational purposes. Original material published on this website may be excerpted and the excerpt reproduced for the purpose of critical reviews. However, such original material may not be reproduced in full on another website or in any manner without prior approval from this website’s owner. In all cases when material from this website is reproduced in full or in part, the author and website must be credited by name and a hyperlink provided to this website