The first polls after Donald Trump's triumph in New Hampshire are bad news for the establishment/media and for his campaign rivals.

Trump now starting to do well among Latino's;

"A new poll confirms it. In the national survey, which was conducted by Beck Research on behalf of the American Federation for Children, 38 percent of Latinos favor Trump. Ted Cruz got 15 percent. Jeb Bush pulled in 14 percent. And Marco Rubio, the guy who’s supposed to be the one who could unite the party and win? Just 8 percent."
Si Se Puede!
In new poll on Latino voters finds Donald Trump has more support from Republican Latino voters than Cuban-Americans Ted Cruz and Marco Rubio combined."

144
SHARES
FacebookTwitter
Donald Trump has a commanding lead in Massachusetts, pulling in more support than the next 4 candidates combined. He currently leads Marco Rubio by 31 points – 43-12% – about 18 days away from the election.
If you’re Donald Trump, it’s hard to get better news out of The Bay State, considering there are 39 proportionally allocated delegates up for grabs. The 5% threshold looks like it will be achievable by everyone except perhaps Ben Carson (Carly Fiorina and Chris Christie suspended their campaigns during the poll), meaning most candidates still standing for Super Tuesday will walk away with at least a couple delegates.
Super Tuesday looks like the day that could seal the nomination for Trump, especially if Cruz, Rubio, Kasich, and Bush are all still in the race. Several states splitting votes for second place in what increasingly looks like a “Trump vs Not-Trump” primary race could put everyone else in VP mode.
It should be interesting to see if anybody drops out after the South Carolina primary next week. A poor showing from Ben Carson or John Kasich could mean curtains for them. With the way things are playing out, it does seem like we will realistically know who the Republican candidate will be on March 16th. Either Trump will build an overwhelming delegate lead, or one of the the “Not-Trump” candidates will have consolidated the anti-Trump vote.
Results:
Donald Trump – 43%
Marco Rubio – 12%
Ted Cruz – 10%
John Kasich – 9%
Jeb Bush – 8%
Ben Carson – 6%
Chris Christie – 3%
Carly Fiorina – 2%
Other – 0%
Undecided – 7%
Poll Report: http://overtimepolitics.com/pollingdata/OvertimePolitics.comFeb9-Feb11RepublicanPrimaryPoll-Massachusetts.pdf 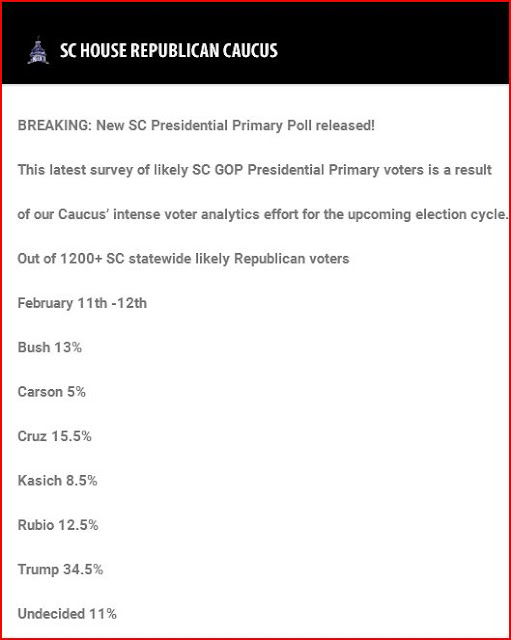 97%
in Tennessee, which will be one of the states voting in the important March 1 “SEC Primary.”

Trump was in first place with 33 percent, followed by Cruz in a distant second place with 17 percent, according to the poll:

When asked to name the one person they would most like to win the 2016 presidential election, 33 percent of self-described Republican voters named Trump. Cruz came in second, chosen by a significantly smaller 17 percent of Republicans.
But 28 percent of GOP voters said they did not know who they would like to see win.
Ben Carson, who led the presidential field among Tennessee voters in the October 2015 MTSU Poll, drew just 7 percent of Republican voters in the latest sample. The remaining Republican candidates also registered in the single digits at best.

The poll was conducted of 600 registered voters, not likely primary voters, between January 15 and January 20 and has a margin of error of plus or minus four percent."