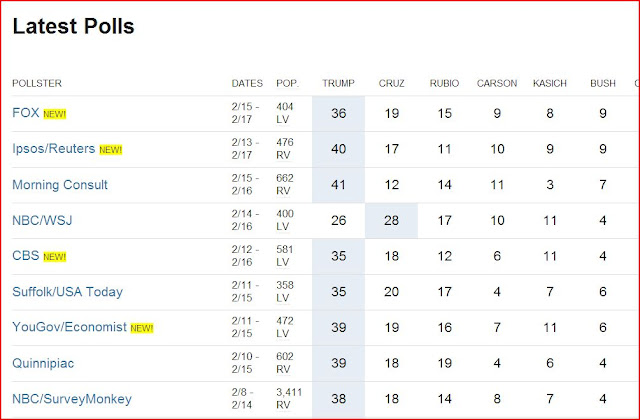 "Not only NBC/WSJ is a disgusting poll but the way Chuck Todd announced it today was even worse. He called it a game changer"
CNBC interrupted their programming with 'Breaking News' of this poll."

The "justification" for the NBC poll is that it was the only on taken 100% after the last debate. But the Morning Consult poll and the just released Ipsos/Reuters polls were also taken post debate;

"Donald Trump has taken a more than 20-point lead over U.S. Senator Ted Cruz of Texas in the Republican race for the presidential nomination, bolstering his position ahead of the party's primary in South Carolina on Saturday, according to a national Reuters/Ipsos poll.
Among Republicans, Trump, a billionaire businessman, drew 40 percent support in the poll conducted from Saturday to Wednesday, compared with 17 percent for Cruz, 11 percent for U.S. Senator Marco Rubio of Florida, 10 percent for retired neurosurgeon Ben Carson, and 8 percent for former Florida Governor Jeb Bush."

The NBC poll is obviously not only an outlier but blatantly so whose set-up has been well described;

And the last sentence is the debt intelligent observers owe to this flawed poll, if flawed is the correct terminology for a creation being set out by a Dem pollster, exactly as desired.

"Republican pollster Bill McInturff, who conducted this survey with Democratic pollster Peter Hart and his firm Hart Research Associates, says Trump's drop could signal being "right on top of a shift in the campaign."

Trump's polling can not be viewed only by the responses of Republicans and even less so by a poll weighted to "very conservative Republicans." Trump, uniquely amongst the Republican candidates, has appeal to Independents, and Democratic supporters. If you strip them out then of course there will be a distorted result.

Everyone, except the most partisan supporters of Trump's opponents and the die hard intransigents in the media gets this. It is too much to expect that such an embarrassment to polling is so vivid in its bias that even that motley bunch can see reality but at the end of the day it doesn't matter.

This poll can be added to all the other failed tactics of an increasingly shrill and defeated Establishment as proof to the people who want change who the opponents of that change are, and who is the person who will deliver the balm to their frustrations and to their country.

If this is successful I will dedicate myself to tirelessly support the populist, pro-life,Christian values. conservative cause as exemplified by Donald Trump, Governor Palin and the basic thrust of the Tea Party.Since we are at a crucial stage of the election period I would wish to commence this site transition within a month. If you would wish to support the concept of a hard hitting site that stands up for your values here is the support link.
gofundme.com/cmh2jmwc
Thank You