A flurry of polls  to 1/4/16 came out today all showing Donald Trump with substantial leads in New Hampshire-all taken post Iowa. The polls run from a Trump lead of ten points to 21 points-really polling is an inexact "art" but the lead in the aggregate is obvious;
"Some of these recent NH polls have an MOE of up to and above 6%. At what point does a poll like that become junk? They are heavily adjusting the numbers because they don't fit the turnout model."

"Support for Sen. Ted Cruz (R-TX) in New Hampshire has collapsed precipitously, according to a Suffolk/Boston Globe poll released Friday which showed him falling from second place to fifth place in the state.
The poll showed support for Trump at 29 percent and Rubio at 19 percent. Cruz, at 7 percent support, lagged behind not just Rubio but also Ohio Gov. John Kasich (R) and former Florida Gov. Jeb Bush (R), who came in at 13 percent and 10 percent support, respectively.
This indicates a dramatic decrease in support for Cruz, who recently pulled off a first-place finish in the Iowa caucuses. Cruz had stood at 12 percent, tied for second with Kasich and beating Rubio at 10 percent, in a late January version of the same poll.

Most New Hampshire polling, both before and after the Iowa caucuses, suggested that Cruz and Rubio were both comfortably ahead of the remaining Republican candidates in New Hampshire and neck-and-neck with each other in the contest for second place. This poll challenges that narrative and underscores Cruz' difficulty in bringing his performance in New Hampshire in line with his Iowa victory and with nationwide polls showing him to be a clear favorite for second place.
TPM’s PollTracker average shows Rubio pulling ahead in the Granite State, beating Cruz by 15.3 percent to 12.2 percent, while Trump overshadows them both at 32 percent."

Nationwide Trump's post Iowa position shows a return to reality after the Democratic poster PPP Polling had him only four points ahead of Rubio. PPP Polling's articles shoudl come with a notice "For entertainment purposes only" 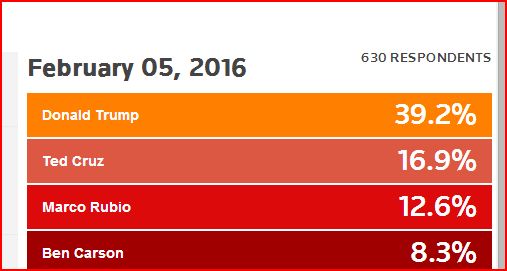