Emerson poll of Connecticut where Trump is shown with 50% support:
a) DT holds a solid lead in all 5 CD by margins of 18 to 38 points.

b) CT is a closed primary.  H/t Techno 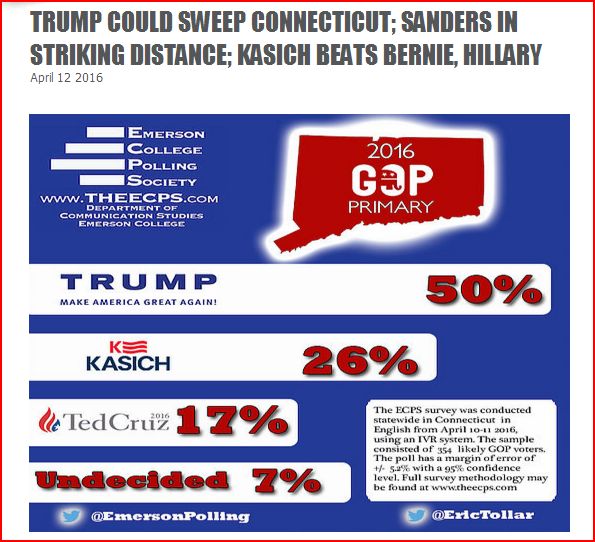 In a primary season where every state now counts—on both sides of the ballot—Donald Trump is positioned to sweep the 28 delegates at stake in the April 26 Connecticut GOP primary. In a statewide poll conducted by Emerson College, 50% of likely Republican voters say they will vote for the billionaire businessman.

Ohio’s John Kasich is in second place with 26% of the vote. Ted Cruz, with 17%, risks being shut out of the delegate count if he fails to win 20% of the statewide or Congressional district vote. Six percent (6%) of GOP primary voters are undecided.

Trump holds a solid lead in all five Congressional districts, by margins of 18 to 38 points. Kasich finishes second, and Cruz is third in all five districts.

4/6--4/11
Brackets March 31
It's no wonder Trump is spending most of his time now in upstate NY in cities like Rochester, Syracuse, and Buffalo. There are now 9 polls in a row with Trump over 50% in N.Y. 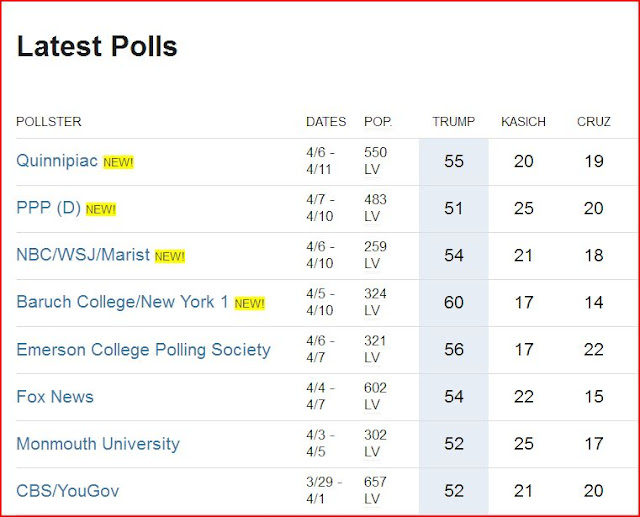 If the Republican Primary Election for President were held today and the candidates were John Kasich, Donald Trump and Ted Cruz who would you vote for?


Donald Trump leads Hillary Clinton by 19 points when voters are asked who will likely be the next president.

Donald Trump holds a 66% favorable rating in the Empire State. 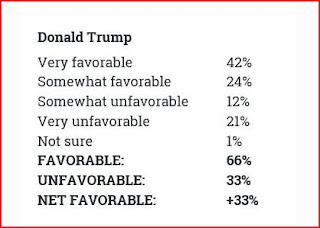 Only two behind Hillary, effectively tied nationwide and tied with her in
Pennsylvania;