Poll Shows Only "Job's" Trump Can Win Pennsylvania And The Presidency

Trump is in an exact tie in Ohio in new poll. Down in Florida but it is expected that state will be in flux after Orlando. 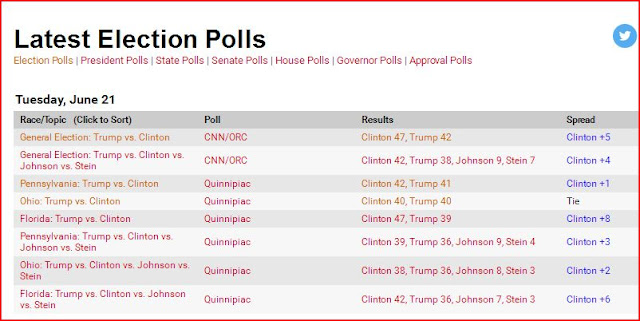 PPP Polling is a Dem associated firm and for them to show Trump leading in Florida (where he leads because more women support him than Hillary) and tied/ahead margin of error in Pennsylvania, which Obama won by 5.37 points over Romney and 10.32 over McCain is significant.

Trump is polling at 10% amongst Pennsylvania Blacks compared to Romney's 6% nationwide. 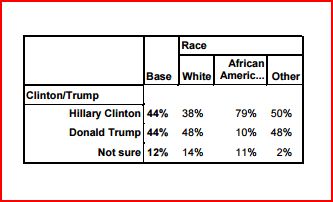 In January, after  Donald Trumps landslide victory in the Michigan primary                  I wrote "Only Jobs Trump Can Win Michigan And The Presidency." The core facts were these;

Donald Trump won the Michigan primary by over 153,000 votes and a huge 11.7 points He beat off a challenge from John Kasich who was, according to some polls, leading him in the state;Both the Democratic and Republican Michigan primaries were open and Independents and Democrats could vote in the GOP Primary.

The Democratic turnout was  1,193,169 The Republican Turnout was 1,332,742 up 30% from the 2012 primary.Thus the GOP saw 139,573 more voters than in the Democratic primary. The fact that the exit polls overwhelmingly advised that voters were looking for someone outside the traditional establishment;

"What are your feelings about the federal government?
Michigan:
indicated strongly that Trump not only lifted the GOP turnout but attracted a solid tranche of Democrat's and Independents.

"Trump won a plurality of the 31 percent of self-described independents in Michigan’s GOP primary
Perhaps the most notable statistic of the night came from Macomb County, ground zero for the “Reagan Democrats” of yore. In the 1980s, these white, working-class voters defected from a Democratic party they felt had abandoned their economic interests with progressive stances on issues such as affirmative action and immigration. Macomb County’s politics have fluctuated in years since, but it remains a bellwether for Michigan and a symbol of the state’s blue-collar electorate. Trump blew away the competition there, taking 48 percent in a four-way contest."

Subsequent to that result, and confirming the central premise this report came from Pennsylvania (Via Conservative Treehouse);
CBS PITTSBURGH (KDKA) – "Nearly 46,000 Pennsylvania Democrats have switched to Republicans since the beginning of the year.  According to Penn Live, some experts attribute the mass exodus to Donald Trump."Professor of Public Affairs at Franklin and Marshall College, Dr. G. Terry Madonna, tells the paper he has a theory behind the switch. (McCall news advises 55,000)

“With the increase in support in exit polls for Trump among working class, blue-collar Democrats, it is my belief that these are people who fall into that genre,” said Madonna.
The numbers are similar in other states as well.  The paper says in Massachusetts, as many as 20,000 Democrats have gone from blue-to-red this year with Trump cited as a primary reason. And in Ohio, as many as 1,000 blue collar workers have promised to switch parties and vote for Trump."
Two new polls from Fox present an intriguing set of statistics which may have the November election winning ramifications. In New York Trump has a massive, up to 34 points, lead over Kasich and Cruz;

But of equal if not more significance is that head to head with Hillary Clinton Trump is 16 points behind in the Empire State. How is that positive for Trump-it is because "electable" Romney lost to President Obama by 28 points!  Of course it is unlikely Trump can win New York in the general election but the 12 point improvement over Romney may have great significance elsewhere.
Romney lost to Obama in Pennsylvania by a relatively narrow 5.37 points.The new Fox poll of Pennsylvania also finds Trump with a double digit lead (26 points) over his rivals but the intriguing result was that Trump and Hillary are exactly tied at 44% each in the state, 11% of Dem's and 8% of Blacks would support Trump (6% supported Romney nationwide).
These very positive results come at a time of extreme division and partisanship in the GOP's ranks. If Trump is the nominee the entire Republican campaign will turn on supporting him and attacking (presumably) Hillary. That being the case there is of course a strong possibility that Trump can improve his current polling and take the state.
Winning Pennsylvania (and presuming Florida is also won) would almost certainly ensure Trump got to at least 269 Electoral College votes and was elected president as the map below sets out. With Pennsylvania Trump could win without either Ohio or Michigan; 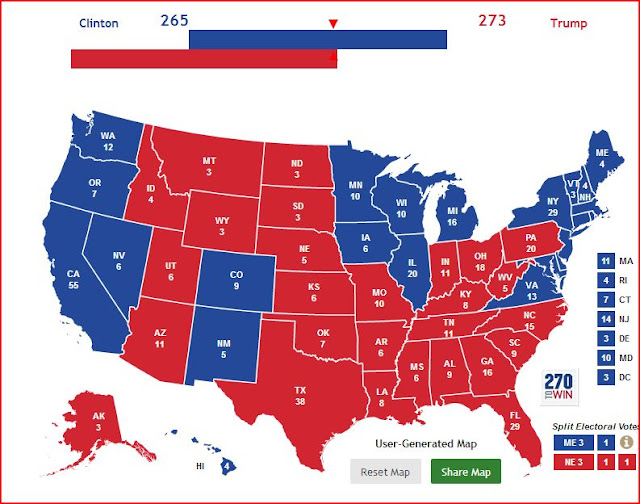