Who is Nate Silver?

Speaking of liars and cowards, Nate Silver. Silver is the “numbers guru” who used to write for the DailyKooks (Mad Markos Moulitsas 'Daily Kos') website and trash us. Silver, in his subsequent books and writings never disclosed he got campaign data from Obama in 2008. Silver lied his way to a top column at the New York Times and now has his own website. For months Silver gave Trump single digit (2%) chances to get the nomination

Since Silver and his mate (perhaps literally) "Forecaster" Harry Enten are seen as near infallible gurus of prognostication by the leftist media it is of value to see exactly how they are doing and whether their 'reputation' is a grossly;y inflated one based on pure luck, insider information and blind chance.

Here's Silver, Enten and their 'team of experts"

"Will Trump Clinch The GOP Nomination Before The Convention?"

By Harry Enten and Nate Silver

In addition to Nate Silver’s and my estimates, we tried to include a diverse set of opinions from across the political spectrum. We also focused on analysts who have been following the delegate race closely and know the intricacies of the GOP’s delegate rules. Our panel included these people:

From Utah to New York-6 prognostications in a row, they achieved a 100% failure record-not one single forecast was correct, some wildly out like New York at 71 delegates for Trump who achieved a landslide of 60% of the vote and 90 delegates. 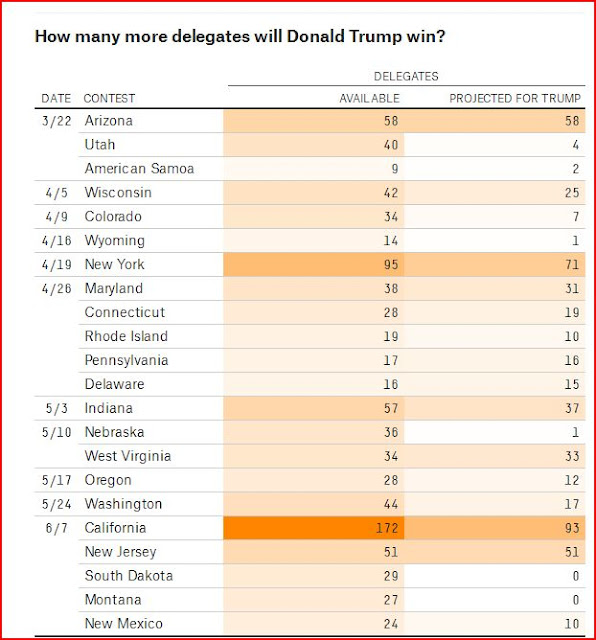 And then the next 5 guesses (for that is all they are of course) completely wrong!
So they are at least consistent eleven out of eleven  wrong. Getting Delaware and Pennsylvania wrong takes some doing-but they managed it.

There are ten more to go, can they make it a grand total of 21 wrong guesses? I don't do goat entrails or other omen work, but if I did I would be confident my success rate would be better than Silver and his "experts".

Oh, and Silver's meme is utterly exploded "Trump has won a majority of the vote only in his home state of New York.5
Posted by M. Joseph Sheppard at 3:23:00 AM