Trump And Palin's Unity Olive Branch To Cruz Rejected; It's Time For Him To Go

After Tuesdays' utter crushing defeat of Senator Cruz in New York he has been mathematically eliminated from being the nominee on the first ballot.

By staying in at this point his, like Kasich, only hope would be to deny Donald Trump enough delegates to be 1st ballot nominated and thus to force an open convention.

This is a terrible plan. It is wrong morally, wrong tactically, and wrong in respect of the huge voting and delegate lead Trump has.

If, somehow Cruz succeeded and was the nominee it would be a Pyrrhic victory as he would be roundly defeated in November and the party, perhaps irrecoverably split.

Both Trump and Governor Palin held out an olive branch to Cruz and                   called for unity
"In a restrained victory speech in New York Tuesday night, he referred respectfully to chief rival Ted Cruz as “Senator Cruz.” 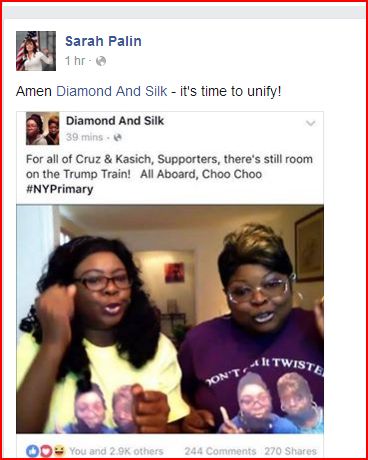 But it was rejected by Cruz (who instead told Kasich to quit)-to what realistic end for Cruz I can't imagine.

"These people who claim the moral high ground, the guardians of conservatism, who are willing to trash Sarah Palin and Phyllis Schlafly are standing on fill dirt. They don't recognize a con job when they hear it. They will be sitting out the 2016 general election while a very conservative candidate wins the election.
Ted Cruz now has an opportunity to prove that he believes in the constitution, that he believes in the Party platform, that he believes that voters should decide elections. He has a narrow opening to salvage his Senate career by avoiding being a spoiler.

He has a chance to prove that he is a conservative, not just another politician serving the D.C. uniparty. Ted Cruz... do the right thing and withdraw. Unify conservatives.

Mend fences with Palin and Schlafly. Do it while you can save face and avoid next week's resounding defeat in the New England Primary. Tell your GOPe advisers to stick it. Let Kasich try to be the spoiler.

You will quickly find your "super-conservative" backers switching over to him as the next "conservative" hope to defeat Trump. They are phonies and we all know it. Wise up, Ted and save yourself while there's still time."

And in his own words 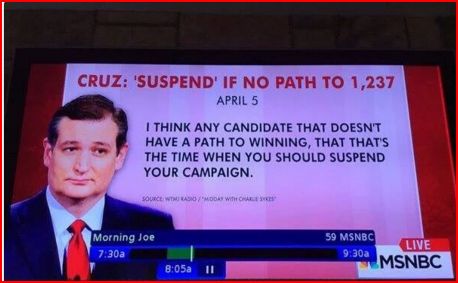