The BS/Joins When It Looks Safe/Opportunist/Clueless endorsements flow thick and fast for Romney now that the media feel it is safe to crown him as the nominee.


In the real world Santorum is closing fast in Wisconsin-from 13 behind to just 5 which is MOE territory, which, as I set out below,if he wins or comes very close can stand the campaign in its head. It will be amusing to see how the media tries to spin a loss by Mr. inevitable if that is what happens and if the amazing Pennsylvania poll hold true Romney will be in big trouble.


At the end of the day to will be the rank and file, not the Rubio's/Bush's et al, who determine who the nominee. If the voters can continue to see through the media/establishment inevitability push, then Santorum could well win, or at least stop Romney from getting the nomination. 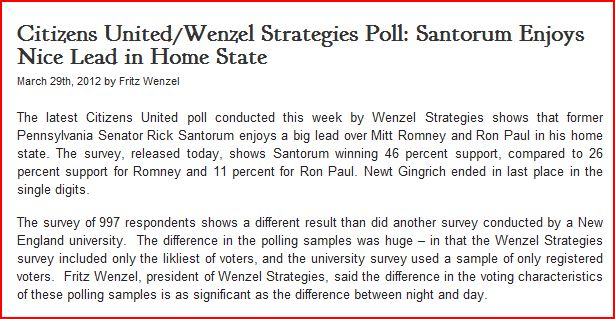 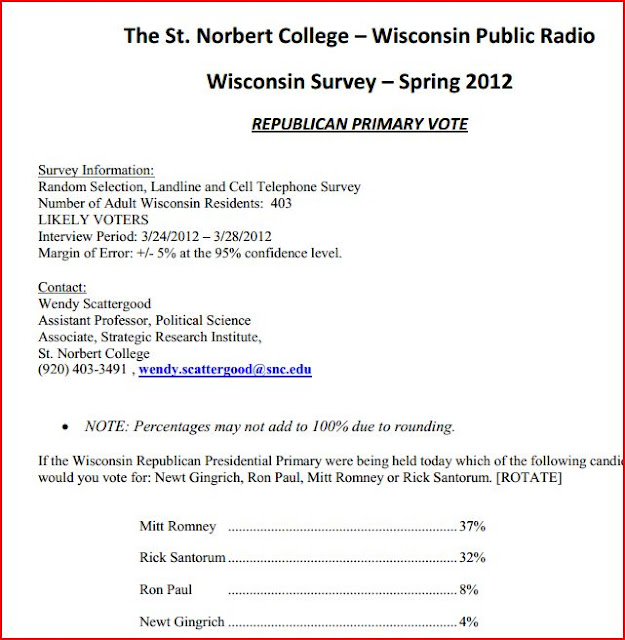 At an equivalent time in 2008, McCain led Huckabee by a 63-22 margin in the Gallup tracking poll. Romney currently leads Santorum by a 39-28 margin with Newt at 10%. McCain won Maryland by a 56-29 margin and Wisconsin by a 55-37 margin.
Here is the trend to Santorum which is hidden by the media before the new polls above

The Establishment and Main Stream Media (an hydra) are going all out to push the meme that Mitt Romney is the presumptive nominee-crowned today by this AP headline via Yahoo; "Romney edges into mop-up phase of campaign" AT THIS LINK.
The gist of the article is that, in their view, Gingrich took "an even more obvious step toward the campaign exit" (by scaling down his campaign and staffing). As far as Santorum is concerned "He seemed to acknowledge publicly that his quest for the presidential nomination could end in failure" (because he indicated he woudld consider being VP).
After a few lines about each not quitting quite yet, the rest of the article moves into Obama versus Romney general election mode.
The other theme is that Gingrich should, according to the media, quit and retain whatever shred of dignity he has left . Matt Lewis advises this AT THIS LINK where he calls Gingrich's campaign "delusional" and irrelevant.
Hilariously and without noticing the irony (and a glaring typo) Lewis calls on the memory of, of all people, Winston Churchill in his advice to Newt to quit. Churchill of course, as anyone with a semblance of knowledge of history knows, was cast into the wilderness by his party and made one of the greatest comeback of all time. He of course famously said, when his country was at the lowest ebb "we shall never surrender" yet that is exactly what he,Lewis, is encouraging Gingrich to do.
in reality, Newt could lose his dignity and reputation, by quitting and endorsing Romney after all he has said, correctly, about him. He has advised that he will fight on until, and if, Romney has a majority of delegates. Every delegate Newt gets is one less for Romney to obtain, and one step closer to a brokered convention, where anyone but Romney could prevail.
Santorum is in exactly the same position, actually a stronger one of course, as under the GOP's convention rules he will be, so far, one of only two men to be nominated on the first ballot in Tampa. Newt and anyone else could be nominated subsequently if it gets past the first ballot without a winner.
What the media is totally ignoring, ( as well as the poll showing Romney as "the most unpopular candidate in 28 years" AT THIS LINK) is the fact that Santorum is closing the gap in Wisconsin where, should he pull off a major upset all the rules will have been broken and Romney will be in the fight of his life.
There is a full analysis of just how much key states, and the national campaign, are shifting to Santorum AT THIS LINK after the Etch A Sketch disaster and the Louisiana landslide.
Rubio and Bush are the latest to be added to the Romney endorsement list. One is a blatant piece of opportunism, and the other is a ho hum establishment crowning. Neither matters to Wisconsin/North Carolina and Pennsylvania where the real battle, away from the media BS, is to be fought.
If Palin announced  that, could she vote in those three states she would vote for Santorum, then anything could happen. The fate of the nomination could very well be in Sarah's hands if she so chose to take this course of action.
Posted by M. Joseph Sheppard at 12:20:00 AM