The Greek bailout by bankers taking a massive haircut (whilst they are propped up by massive near free cash injections by the European Central Bank's printed money machine is taking place.


When completed it will calm the markets-which, in anticipation of just this taking place have been rising solidly for the last two days after panicking (or rather shaking out the nervous nellies and making big profits on the rebound) Tuesday as I mentioned in my previous comments below.


What this shows is that as long as there is a printing press at the various reserve banks world-wide there will be no economic collapse. There won't be subsequent inflation either to crisis levels as the tap can be easily turned off and interest rates can be lifted. What it also shows is that the whole financial commentary industry is a self-serving place for used car salesman and real estate agents of the worst kind.


This is why I love the best of the doom and gloom sites "The Market Oracle (linked below) as it is the home of the perma-bears and gold bugs and, best of all, the chartists. the chart makers/followers would do the Delphic Oracle proud, would make those who interpreted the will of the Gods through looking at Goats intestines very happy and mumbo jumbo followers delighted devotees.


The non-cataclysmic Greek event shows also that nobody knows what will happen in the markets really.If they did would they be pitchmen working all sorts of hours and making up all sorts of charts at various finance houses? No they woudl be putting their own money down and reaping the rewards whilst on their yacht.Nobody knows when the next "black swan" event will come either (although,as below, March 20th is the next doom date).


Here is a great example from a market Oracle column which is supposed to be an expert on how gold will move-where the straight up admit they were caught flat footed by its decline. Then they show one of their charts which would do Nostradamus proud.


"Gold reversed violently to the downside last week, an event which has serious implications. It had been doing well up to that point and we did not see this reversal coming, so this is going to be "wise after the event" update - still it is considered to be better to be wise after the event than not wise at all, particularly if our interpretation of the meaning of this development proves to be correct." 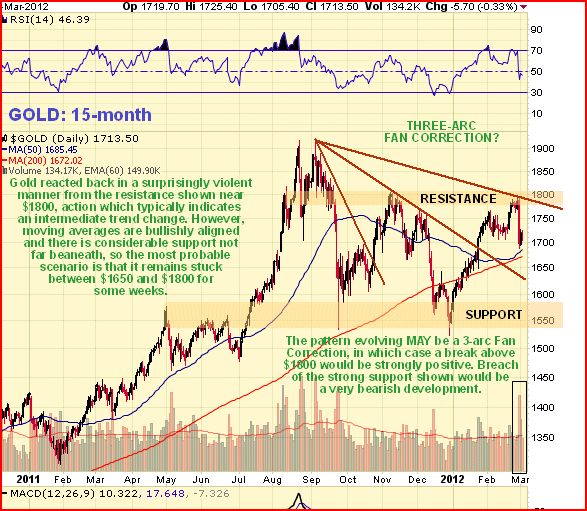 I might as well continue with the countdown to doom clock as there is only a few days left till the possible economic collapse commences.


Authorities in Athens are ready to enforce the controversial collective action clauses, or CACs, to impose the restructuring deal on all bondholders as the number of voluntary agreements look set to fall short of the required amount.
Credit rating agencies have warned they will declare Athens to be in default if the CACs are triggered which would be a dramatic culmination to a three-year rollercoaster ride for Athens, the eurozone and global markets.
While the markets have been ready for a Greek default for months, the move could leave Greece and its banks barred from funding from the European Central Bank (ECB). On Monday, Standard & Poor’s declared Greece to be in a state of “selective default” which led to the ECB announcing it would no longer accept Greek government bonds as security for new loans.
The rating agency said its decision had been prompted by the threat of the CACs and the actual use of them is likely to tip Greece into actual default. The agency said it regarded the process as a “distressed debt restructuring”.
Raoul Ruparel of Open Europe, the London-based think-tank, said: “Greece is likely to struggle to reach the targets for a voluntary agreement so the credit rating agencies are almost certainly going to see this as a default. Read the rest of the article AT THIS LINK

My original post is below and here is an update from the respected British Daily Telegraph financial pages. Of course the trillion+ Euro printed money ECB loans to European banks may prevent the Greek led collapse, which has been widely expected. Further Greece may limit the damage by calling on the ECB's "Emergency Liquidity Assistance Fund" but how long can that shell game be kept going-piling debt upon debt.-We shall see if the great Ponzi scheme has legs in a week or so.

In a post entitled AT THIS LINK "The Greek Bailout, the CDS Market, and the End  of the World" at my favorite doom and gloom site AT THIS LINK "The Market Oracle" Shah Gilani advises that March 20th may be the tipping point.


The core of his article explains that Greece has to come up with the goods on March 20th and it doesn't have them. A white knight could of course come in and toss Greece more money (the ECB? China?) but surely a time must come, if it is not this time, that even the bottomless pit of printed money, which is just piling debt  upon debt for Greece, must come to an end. perhaps the 20th is the end game.


In another post "DeepCaster" AT THIS LINK discusses the ramifications for the USA's economy from all this money printing in suitable Market Oracle end of the world analysis with a suitable headline "Gaining from Gargantua Until it Collapses. Basically "buy gold" is his answer.


Certainly it has been the right answer over the last two years and, whilst one can poke fun at the doomsters one has to ask the question-how long can Bernanke keep churning out endless credit and creating endless debt. DeepCaster asks some interest in questions and displays some frightening facts.


Here is Shah Gilani's main comment-lets hope he is wrong.

"Here's the long and short of it.
Greece needs to make a 14 billion euro ($19 billion) payment on its huge outstanding debt on March 20, 2012.
The problem is Greece doesn't have the money, even after the previous 100 billion plus euro bailout.
If it doesn't make the payment it will be in default and all hell will break loose.
That means banks that hold Greek bonds won't get all their money back and they will have to write down Greek debts to zero.
That will trigger contagion as other countries in Europe will be seen as vulnerable to default too, and as panic in Europe grows from depositors trying to get their money out of insolvent banks, the spillover will infect world markets.
That's the case for contagion."