The Coming "Permanent" Democratic Party Grip On The Presidency

As a conservative it pains me of course to write this analysis, but hopefully, being a conservative, and thus older, indicates one has a firmer grip on reality than when a youthful liberal. Thus facts must be faced and solutions looked for-if there are any of course.

And of course a number of tomes have been written by well qualified political analysts predicting  a permanent majority for respectively the GOP, (the "Southern strategy") and then the Dem's, and of course both fell over subsequently. What makes this prediction possibly more accurate is the inexorable grind of demographics. Basically people vote (assuming a similar inter-generational economic position) as their parents did, and if more parents are of the Democratic Party persuasion, then the weight of numbers will prove insurmountable to the conservative element in society, as the party system is currently constructed.

If the current state of the Electoral College is considered, which is all that matters, the polling numbers which seem reasonable surely to most observers, we find this; 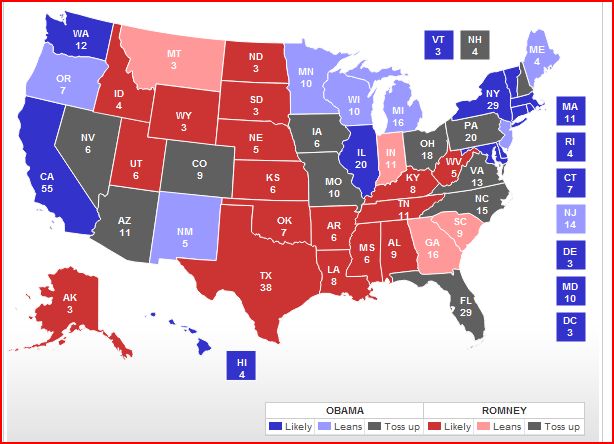 Thus President Obama needs another 43 Electoral College votes to get to the 270 needed for re-election.
His options are plentiful. He is leading in Pennsylvania (20) Florida (29) Virginia (13) New Hampshire (4)
Colorado (9) and Ohio (18) a total of 93 EC votes. Thus Fla/Va/N.H. or Pa/Va/Oh or Pa/Fla or Fla/Oh
would be decisive, and are more than reasonable options, as he won all these states in 2008 as well as leading in the polls now.

Of course the economy could collapse, there could be a major foreign incident and other "black swan" events, which no amount of prognostication can account for. However, in the normal course of events and allowing for the fact that sitting presidents tend to be re-elected, one could reasonably expect President Obama to win again.

If that is indeed the case, and 227 EC votes is the Dem's base, as seems reasonable, then what does the future look like based on that concept? It could reasonably be assumed that Pennsylvania, if it keeps ongoing for the Dem's, can have its 20 votes added to the 227 which takes the total to 247. PPP Polling asks if Colorado, which Obama won handily in 2008 "can even be considered a swing state anymore" the increasing Hispanic population there being one reason for the move left. This moves the EC vote to 256. 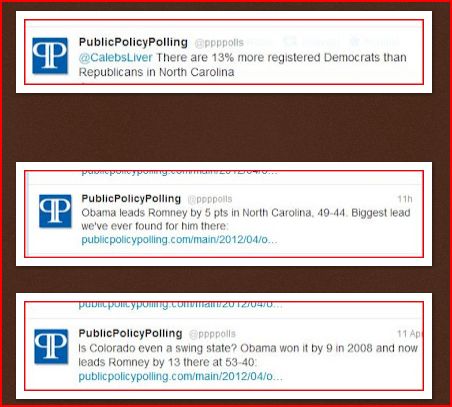 Why New Hampshire should not be a part of the seemingly rock solid liberal block in the New England states is a mystery, and with confidence the 4 EC votes can be added which takes the total to 260. North Carolina and Virginia went to Obama in 2008 and he is currently polling in the lead in Va. but perhaps it is too early to include them as Dem states, but if either of them moves in that direction then the Democratic majority is ensured.

The key to what appears to me to be an unavoidable, unassailable, Democratic majority in the Electoral College, is the growing Hispanic population. If, as PPP posits, Texas will be in reach for the Dem's in, perhaps, two elections, then I can't see how the GOP, as currently structured, can win. 227 plus 38 (probably more after the next census) is 265, just 5 EV short. Thus with Pa. or any sizeable state, (and the Dem's are also looking to Arizona's growing Hispanic population moving that state their way) the Dem's have a lock on the Electoral College-barring a black swan from time to time of course. Yes, turnout amongst Hispanics will affect the pace of change, but inexorable population growth and DNC targeted funding will assist in accelerating the process.

This one party dominance is the normal state of affairs actually. The Democratic party from Jefferson to Buchanan was the dominant party-under Monroe it was the only party. From Lincoln to Hoover the GOP was the dominant party and, from Roosevelt to LBJ, the Dem's again. Since LBJ the presidency has swung back and forth but demographics have continued their inexorable march. Even the population shift to the south, which gave the GOP extra EC votes from 2008, will not be enough to counter the growing Hispanic population. So is there any hope for the conservative element in society to ever see the presidency again?

On a purely demographic basis I don't believe so, but on an economic basis there certainly is hope and again, it is the inexorable tide of history which will grind slowly but surely that will bring the eventual change.

Just as with the rise of a Black middle class, recent years have seen a growing number of conservative Black candidates and prominent political personalities, so will the improvement in living standards for the Hispanic population see a rise in the number of conservative Hispanics. Already two are being proposed as vice-presidents, Rubio and Martinez, and an increasing number will join these high fliers as rank and file members of the party.

As a growing and prosperous Hispanic middle class joins their similarly prosperous Black conservatives in the suburbs and Cain/West, Martinez/Rubio are joined by numerous others, the inexorable grind of American capitalism, which brings conservatism to individuals personal prosperity, will start turning the wheel of history back to the GOP-or its inheritor party.