Palin will be in prime position to be elected our 45th president in November 2016. 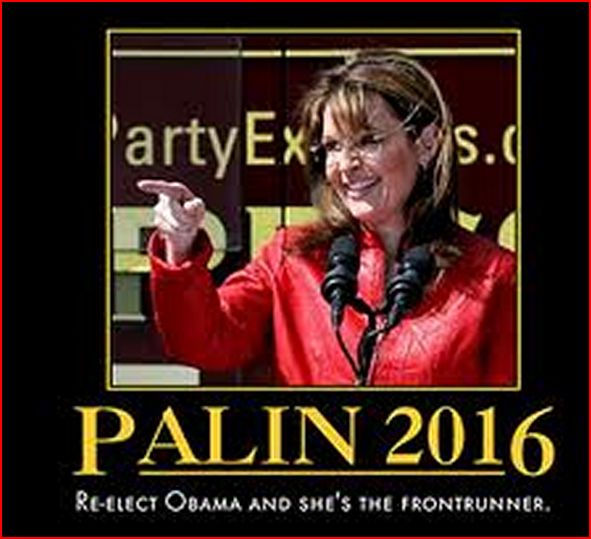 "SarahPAC went right on collecting cash while rumors swirled about whether or not the darling of the tea party would mount a 2012 presidential campaign.  That continuing fund-raising convinced many politicos that Sarah Palin would enter the fray and fight for next year's GOP nomination.
But by choosing not to run in 2012, Gov. Palin showed she was thinking one step ahead of most observers.  As she told Greta Van Susteren, "I believe that at this time I can be more effective in a decisive role to help elect other true public servants to office."
That is to say, if the GOP can simply prevent resounding Democratic majorities in the House and Senate, and keep President Obama's legislative agenda handcuffed, Palin will be in prime position to be elected our 45th president in November 2016.


Despite a stagnant American economy and festering unemployment, President Obama is taking in more money --by a lot--than any of his Republican rivals.  Is he vulnerable to defeat in 2012?  Yes, vulnerable.  But between his burgeoning campaign warchest and the flagging popularity of those on both sides of the aisle, the smart money is still on his likely re-election.  A pragmatic Sarah Palin knows it isn't time to strike.
Nominees only get one shot in the general, and she doesn't want to waste hers now.  She sees that 2016 could very well be a Republican cakewalk if the GOP plays its cards right, and that is where she has her laser focus.
So long as Democrats do not both have control of the House as well as 60 Senators, and it seems a near-certainty they will not, Republicans should be able to prevent President Obama from accomplishing any of his policy initiatives.


So long as his attempts to repair a flailing economy are frustrated, and high unemployment rates are strategically maintained, the court of public opinion will deem his an unproductive, ineffective eight years and the GOP nominee will coast to a 2016 victory in much the way Obama did in 2008.
Gov. Palin knows the winning play is also the patient one.


It should be relatively easy, with the political savvy House and Senate Republicans have already shown they possess, to continue hamstringing President Obama's stabs at the "hope and change" he sold to voters in 2008.
A patriot like Sarah Palin knows the national political stage is set for a patient pragmatist.  And in about five years President Palin will be rewarded."