Since the liberal blogosphere and media generally goes apoplectic about any sex related scandal involving conservatives it is only fair and just that there is a quid pro quo, or tit for that as the case may be.


Anthony Weiner was a poster boy for the left-wing blogosphere and when the story  originally broke regarding his sexual predilections his denial was rabidly supported by the likes of rabid leftist site "Daily Kos". Kos kids accused the conservative media (sic) of framing Weiner and defended him right up to the moment he confessed.


Again, unless and until the likes of Kos and the execrable leftist self righteous gossip rags like Wonkette and Gawker get off their high horses the right is justified in bringing to the wider public things like this ongoing Weiner debacle. This includes the comments from the public which enter into the rarefied atmosphere of Muslim conspiracies involving a "lesbian Clinton" and etc."


I make no pretence-I am thoroughly enjoying seeing one of the lefts very own being roasted,especially a New York liberal.

Here is just an example of liberal hypocrisy at work!

"It can be hot," Weiner replies.
"Are you turned on by other guys?" Nobles asked.
"Well it depends on the guy, but generally yes," Weiner said.
This isn't the first time details from Nobles' book proposal have gone public.
In October, news surfaced that Weiner boasted that he masturbated in House restrooms and expressed frustration about his “backwards thinking” Muslim in-laws, according to the proposal.
“Omg. I didn’t think I could get any harder,” read one Weiner message provided by Nobles.


And here is just a couple of the comments at the New York Post; 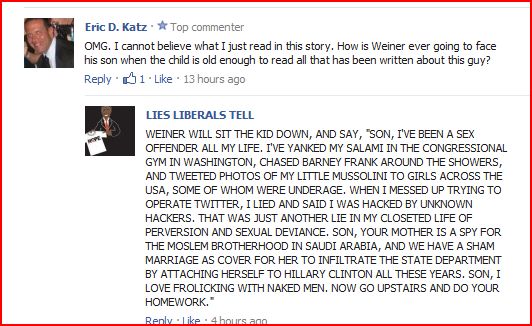