President Obama hits his 52 week low and ties for his all time low at 41% in Gallup. This represents an astonishing 28 point drop from his all time high. If this held up through election year Florida/Ohio/Colorado/Virginia would be lost to him and he would be defeated. Even Pennsylvania could go which would be approaching landslide territory. 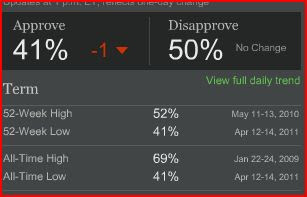 In Wisconsin's judicial election Judge David Prosser,who was endorsed by Sarah Palin, has won the canvass of election results comfortably. This was a referendum on Governor Walkers budget and union proposals, the Tea Party and Palin's power as an endorser-all won and the Dem's/unions lost.