At the "2012 Iowa Caucus" site which bills itself as presenting "Official News, Information And Analysis For The 2012  Iowa Presidential Caucuses" in a very impressive and comprehensive manner-with prospective candidates biographies and up to date information the results as of this writing for their poll are as follows; 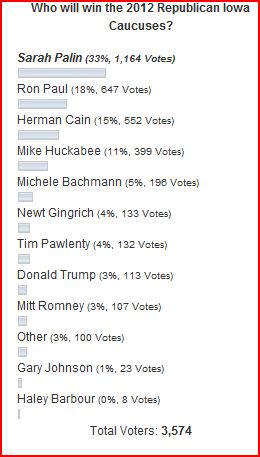 This poll has recorded a substantial number of votes which makes the result all the more striking and
emphatic. However, as totally opposed to the current media meme that Palin is "finished, cast aside for Trump
the result mirrors, time and time again, the poll results from other major sites where GOP activists congregate.

For example, the last two Hot Air polls of over 7000 respondents showed Palin increasing her lead to 35% across a large field which entirely mirrors the results of this latest Iowa poll. The lesson is, once again, that irrespective of what the media wishes to promote, the activists in the GOP want a genuine conservative candidate-and that person is Palin. When she announces these results will only get bigger as the field collapses at that point.
Posted by M. Joseph Sheppard at 10:39:00 PM