"Last week former Massachusetts Gov. Mitt Romney became the latest major candidate to enter the 2012 Republican race for president. The field also includes former Minnesota Gov. Tim Pawlenty, former House Speaker Newt Gingrich, former Sen. Rick Santorum, Congressman Ron Paul and businessman Herman Cain. Former Utah Gov. Jon Huntsman could declare soon. But some Republicans are worried that there's no one in that group strong enough to defeat President Obama, and they want a more-electable candidate to jump in. Are you satisfied with the current field? If not, who's your favorite undeclared candidate? "


They then ran on on-line poll listing prospective GOP candidates who have not as yet declared their intentions and asked readers to express their choice for 2012 candidate from amongst the list-with this result:


As can be seen not only did Sarah Palin decisively, and perhaps very surprisingly given his supposed popualrity as a former Governor of Florida, lead Jeb Bush 52% to 16% but beat all the other prospects combined-even the "none of the above" category. 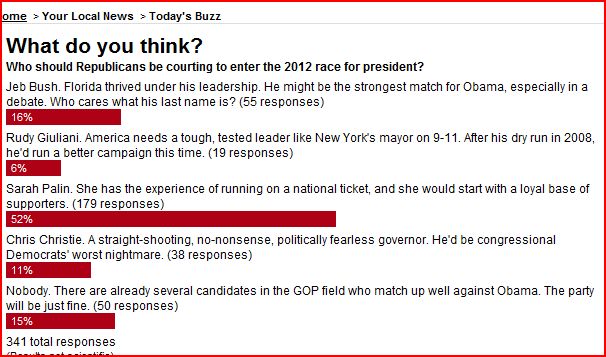 According to an analysis by Conservatives4Palin  Palin has seen a substantial jump in her poll support:
As a commentator said-although she does have much ground to make up the fact that she trails President Obama by 17% points in thsi poll is meaningless in the overall scheme of things. Reagan trailed Carter by 30 points in election year. The poll that matters is Palin's standing with the GOP voters who will determine who the nominee is in in tha area she had done strikingly well.


"According to the Washington Post/ABC News, Governor Palin Has More than Tripled Her GOP Primary Support from April"


The latest Washington Post/ABC News poll of Republican/Republican-leaning independentsshows that support for the Governor has more than tripled since its last poll in April:

The percentage of Republican and Republican-leaning independents who would “strongly consider” voting for her in the primary is equal to Romney’s percentage and over 60% of Republican and Republican-leaning independents would either strongly or somewhat consider voting for her, Rudy, and Romney in the primary.
Her qualified/unqualified number has also improved by a net fifteen points since a low in February of 2010. She still has a long way to go but at least we’re seeing progress."
These two polls re-inforce the trend to Palin which can be seen here
Posted by M. Joseph Sheppard at 11:51:00 PM