The U.K. 's Political World View advises that a senior source advised that Sarah Palin will announce her " in to win" 2012 presidential election campaign " in  coming days". With the just released three minute, all but campaign video highlights from her bus tour, the bus tour itself, the indication of a further tour through South Carolina and Iowa-Blind Bill himself could see she is going to run.
Further under the radar has been the setting up of de facto Palin campaign committee's in states across the nation and the waiting for the two anti-Palin books to have come out and the release of the emails from her time as Governor in case there was any fall out which might have damaged or distracted from a campaign announcement.
The books were just rehashes of things which have been hashed and  were dismissed straight away.especially the 'insider" book which was lampooned as a bitter revenge sort of tome. That they were commercial flops proves the point.
The emails have not only had no "smoking gun revelations but have, to the utter chagrin of the media, been a disaster for the press especially and have painted Palin in a sympathetic light whilst confirming her complaints about them media to the public.
I believe all the indications are that Palin will announce in June for the reasons given here but with the Sudan trip coming in July that may be the month.
From Political World View 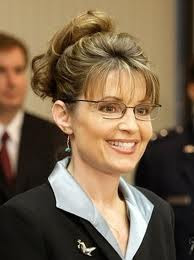 Sarah Palin is to announce that she will stand as a candidate in the 2012 elections, PoliticalWorldView understands.
Palin will end months of speculation by confirming that she will challenge the incumbent Barack Obama for the presidency and will fight a campaign promising to restore America's image abroad and to dramatically improve the economy.
Palin has yet to make an official announcement herself but a senior source said that "she will confirm in the coming days that she will indeed be running and she is in it to win it."
PoliticalWorldView will update you on this story as developments occur.
Posted by M. Joseph Sheppard at 7:12:00 PM