The Hilton New Orleans has put out a bulletin advising that the Sarah Palin team are considering attending the Republican Leadership conference in that city June 16-18th.
http://www.rlc2011.com/attendee-info/
Here is the quote from their bulletin to prospective attendees;
"On Thursday, South Carolina's largest newspaper quoted SarahPAC, indicating that Sarah Palin's "One Nation" bus tour will include a trip through South Carolina and may make a stop in New Orleans at the Republican Leadership Conference. We are unable to confirm this report. Our last communication with Governor Palin's office indicated that her staff was still considering our invitation. That is all we know right now. We will keep you up to date."
This could be the ideal time and place for Sarah to announce her candidacy especially as her bus would have been in South Carolina shortly before the RLC-we shall see !
ORIGINAL POST
The team over at Sarah Palin Information Blog-the 'go to" place for all information on Palin, have set up this poll (reproduced below-the voting can be done at the link above) which gives aficionados the opportunity to be political prognosticators.
Voters can choose which dates they believe Palin will announce her candidacy for the 2012 presidential election, from amongst a series of dates linked to high profile specific events;
CLICKING THIS IMAGE WON'T GO TO THE POLL
THE POLL IS AT THE LINK ABOVE. 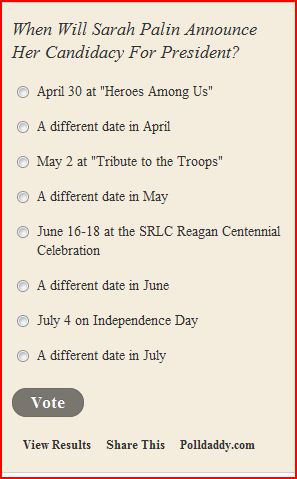 I have today made my Blog's official prediction, by voting in this poll, that Sarah will declare at the SRLC June Reagan Centennial Celebration.
By June, the obvious hiatus that there has been Palin's public profile, will have gone on long enough for her to have put all her announcement details in place, including presumably, her team structure & etc, and it gives her a good long run to "meet and greet" until the Iowa primary.
There is only one problem with the announcement being at that venue, in that she has stated she will announce first on her local talk back radio station "The Bob & Mark Show" but that can be overcome with a live link in to the venue.
June it is, a fearless prediction  ;-) about an event which will shape America's destiny.
Posted by M. Joseph Sheppard at 1:17:00 PM