Politico carries an updated analysis from Election Data Services of new Census data in relation to changes in House seats which allow for further adjustment of my overview: Palin's "Sure And Certain Path To Election 2012". The latest analysis is further possible good news for Palin-should she have the nomination as it edges her even closer to the 270 electoral votes required.


In the original analysis her electoral vote winning path was determined;


McCain/Palin won 22 states with 173 electoral votes of the 270 required to be elected basis for victory.

Population shift and the consequent change in electoral votes, have some states gaining EV's and some losing. The projections, for the States under consideration here are:


Subsequent to the above analysis the polling research firm Polidata reviewed the data with the following result;


The newest data from Politico/EDS gives;


The winning structure is as before;


Retain all 22 states electoral votes won in 2008 plus their additional electoral votes from the population shift. Win the states lost by less than 2.5%-North Carolina, Indiana, Florida and Nebraska's 1 lost EV. 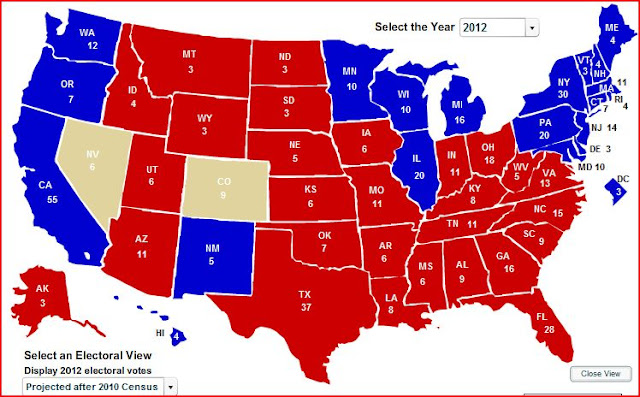