According to the cumulative tracking poll at Real Clear Politics-which is by its nature removed from bias, the Democratic Party's candidate for the 2012 election President Barack Obama has seen a massive, no other word to describe it, erosion of support.The ten point gap between Approve/Disapprove in Gallup is his poorest result too date. 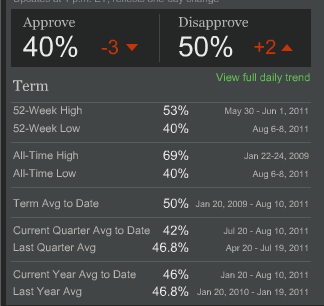 President Obama hits his 52 week low and ties for his all time low at 40% in Gallup. This represents an astonishing 29 point drop from his all time high. If this held up through election year Florida/Ohio/Colorado/Virginia would be lost to him and he would be defeated. Even Pennsylvania could go which would be approaching landslide territory.


At his highest point February 10th 2009 President Obama had a positive approval rating of 65.5%. In today's poll his approval rating is 43.7% and declining.That is a drop of almost 22  points.


Even worse President Obama's disapproval rating, at its best for him, was 19.3% on January 29th 2009. In today's RCP poll aggregate it is 49.8%-a startling rise of 30.5 points in his disapproval rating-and he is in the negative by -6.1% in his current approve/disapprove position.

If the economic situation worsens, and his economic policies on the deficit are seen to be faulty, then this continuous decline over time, and, allowing for fluctuations by events of the moment like the Bin Laden death, would seem to be heading that way again. If it falls below 40% (which it could well be now given the tradition MOE of +/- 3%) it is quite possible that his re-election would be very difficult.