This new poll has Perry well below the hype heights of other recent polls which has him at ridiculous stratospheric levels just after he announced. There is every reason to believe he will do "a Bachmann" and drop down like she has to 8% in this poll and under attack from the GOP in Iowa ("cut the Obama rock star crap Bachmann") of all places.
Palin meanwhile is at 11-13% in Gallup, PPP (polling GOP voters of course) and Reason-Rupe. This is a solid base for someone who has not declared and there is every reason to believe that should she declare she will pick up more support-which support will not be subject to near immediate collapse after vetting as no one on earth has been vetted more than Palin.
Interestingly, the latest Pollster  aggregate is showing-for the first time  in a very long time- the possible first signs of a poll recovery for Palin. If the PPP poll, which is distorted by the over weighting of Dem's they poll, is removed from the aggregate, then the chart shows an upward movement-this bears watching.

Also, the aggregate contains the ridiculous CBS and NBC polls which are the only ones with a "neutral" option which lowers Palin's favorables to a ridiculous degree. If they were removed the graph would be showing a significant  rise. 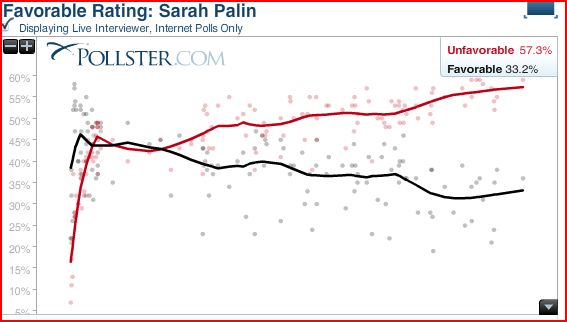 "Former Massachusetts Gov. Mitt Romney holds a 20 percent to 18 percent edge over Texas Gov. Rick Perry among Republicans and Republican-leaning voters in the latest Reason-Rupe Public Opinion Survey.
Two potential candidates not currently in the race, former Alaska Gov. Sarah Palin (12%) and former New York City Mayor Rudy Giuliani (8%), placed third and fourth among Republicans asked to name whom they would favor if the GOP primary were held today. They were followed by Rep. Michele Bachmann (8%), Rep. Ron Paul (7%), Herman Cain (4%), Newt Gingrich (3%), former Minnesota Gov. Tim Pawlenty (2%, but no longer in the race), former Utah Gov. Jon Huntsman (1%), former Pennsylvania Senator Rick Santorum (<1%), and former New Mexico Gov. Gary Johnson (<1%). Approximately 16% of Republican voters are undecided.
This Reason-Rupe poll  surveyed a random, national sample of 1,200 adults by telephone (790 on landlines, 410 on cell phones) over August 9-18, 2011. The overall results have a margin of error of plus or minus 3 percentage points. The GOP presidential primary poll question surveyed 419 adults who self-identified as Republican and "lean-Republican"; that specific question has a margin of error of plus or minus 5 percentage points.
Reason-Rupe Republican Primary Presidential Poll
Responses to "If you were voting today in the 2012 Republican presidential primary, which one of the following candidates would you favor?"
Below is a chart of recent national polls listing various GOP hopefuls, updated to reflect the new Reason-Rupe findings:

The above chart shows that Perry’s numbers soar when Palin and Giuliani are not included in the list of candidates (they were not listed in either the Rasmussen or Gallup polls). This suggests Perry may regain a lead over Romney if it becomes clear that Palin and Giuliani will not join the race.
Tea Party favorites Michele Bachmann and Ron Paul came next with 8 percent and 7 percent of respondents respectively. This is especially interesting since Paul and Bachmann came within 152 votes of each other at the Ames Iowa Straw Poll, with Bachmann winning. Paul consistently does well in straw polls, leading many pundits to contend this simply is a result of his being better able to mobilize supporters to come out to events. However, these new Reason-Rupe poll findings suggest that Paul’s competitive standing with Michelle Bachmann extends well beyond his strong showing in Iowa.
Posted by M. Joseph Sheppard at 5:45:00 PM