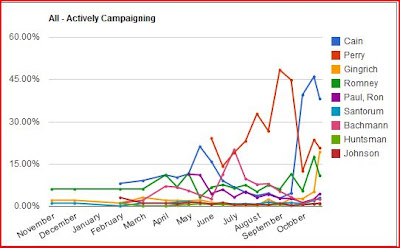 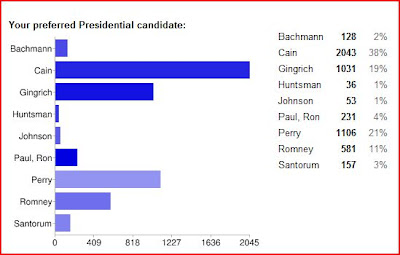 Here's what HOT AIR has to say about Newt Gingrich's remarkable poll rise;
"Over 5000 readers voted. Herman Cain continues to hold the lead, although he’s slid a little in the last couple of weeks. Rick Perry is still in second, but losing ground rapidly to Newt Gingrich. When Gingrich rose from 2.5% to 5% between the last two polls, I knew something was up, and suddenly he’s Hot Air’s #3 pick for President."
I knew something was up before that! See earlier poll results AT THIS LINK
To rise from 2.5% to 16% in two polls is a massive jump and even more impressive is his being tied for second place 22% amongst the top five candidates.
I call Newt's rise inexorable, just as Cain's decline will be, and as the campaign develops it will be clear that Newt is the only viable candidate now that Palin is not running.
It is no coincidence that his rise comes shortly after Palin praised his debate performance
Should she formally endorse him then he would rocket to the top of the polls permanently

This remarkable rise of 19.5 points amongst the leading candidates came-with no coincidence whatsoever, after Sarah praised his performance in the debates. The HA poll is amongst conservative activists and Sarah always was at the top of the poll-it is clear where his support has come from.
.
Posted by M. Joseph Sheppard at 11:32:00 AM