Update; In a substantial poll of  Tea Party Nation members, which mirrors my poll, the result from 1,150 voters was as follows:


Thus in this poll 35% stated that if Romney were the nominee they would vote third party or stay at home. This is much smaller than the 75% in my poll, but reflects that my poll was specific to Palin supporters, whereas the Tea Party Nation poll was to a wider subsection of conservatives.


What the result clearly shows is that, as in both polls, if Romney is the nominee the GOP is doomed to lose. It simply can't afford to have 35%+ or even half of that, not support the candidate and expect to win in the electoral college. Only if there is a massive counterbalance to this loss by independents deserting President Obama could a defeat be averted based on these poll results.


There is a substantial argument for the consideration of a conservative third party if Romney is the nominee (which is a viable electoral college option) as the Republicans would lose anyway, and the possibility of a genuine, non-Beltway permanent conservative party would be a real possibility. If that were the result, it just might be that a Romney candidacy might be the best thing that could happen in the long run.


This online poll was  created with the mechanism that only one vote per computer ID could be cast. It was posted at sites which were predominantly Palin/conservative Republican voter centered.


If someone wanted to cast multiple votes there are of course mechanism but it would hardly seem worth the trouble to do so and it is fair to say that Palin/conservative voters have a higher ethical standard and are not orientated that way.


With all that as a proviso the result, which very much mirrors a previous poll, detailed below, so the consistency is remarkable, has some degree of  importance I firmly believe.That the support for Romney has increased slightly is understandable, given that Palin is not a candidate, as there would be some who will support the nominee no matter who it is.


However, for 75% of responders to indicate they would not vote for the GOP's nominee if it were Romney is stunning.


If even 50% of those, extrapolating this poll to the wider Palin/conservative constituency, who said they would write in Palin (63%!) or someone else or vote for Obama! did so on election day  then, unless there were a massive counter balance from Independents supporting Romney, he would lose.


It would be of course expected that at that time, in the heat of election battle, the urge to get rid of the Obama administration would be so strong that people would waver in their previous commitments.That is why I suggest the 50% mark as a baseline.


This, the poll result, is admittedly, a small sample, but at over 250 genuine votes is worthy.  Also, and significantly, the depth of voter feeling is striking, and I would be confident that if ten times the number responded there would not be much difference in the final percentages.


If this is a valid surmise, then the implications for Romney's candidacy, should he get the nomination, and for a possible third party creation after the election, and for Palin's future, are many and varied.


The poll is still open AT THIS LINK


The original article  follows after the poll result below: 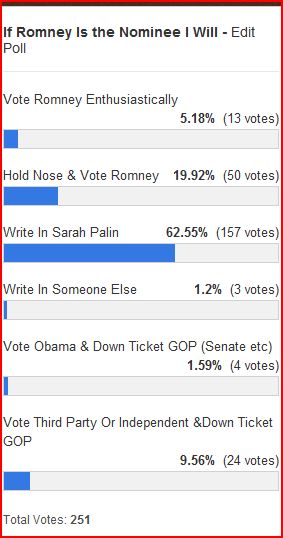 
In early March I ran a poll on what activists would do should Romney be the GOP's nominee. The results were;

17.8% Would vote for Romney
67.88% Would write in Palin
8.61% Would write in someone else
5.63% Would stay at home.
With Palin advising she will not be a candidate and Romney, according to the pundits, seemingly having a lock on the nomination the activists, especially strongly conservative ones, may have to face a challenging choice.
Either four more years of Obama, hopefully with a GOP congress to block him so he is a lame duck from day one of his second term, or to vote Romney and try and remove the Dem's. The questions, amongst many, are;
a. Is it worth putting the republic in peril for another four more years so that a true conservative can be the candidate in 2016 by not voting for Romney, but only voting GOP down ticket e.g. senate etc?
b. Voting the straight GOP ticket so the Obama administration is removed and a strong Tea Party composed congress can blunt any Romneyite centerism?
c. Writing in Palin to show the GOP establishment how many votes they lost by ignoring the grass roots, and sending the signal for 2016, even if it means four more Obama years?
d.Voting for a third party (Palinite Tea Party?) or for an Independent candidate and down ticket GOP?